Mark Jackson labelled his side’s defeat to Shrewsbury Town as ‘cruel’ but insists they won’t sit and feel sorry for themselves and, instead, will turn their focus to this weekend’s Stadium MK clash with Exeter City.

MK Dons produced a dominant display against the Shrews on Tuesday night but were unable to make their possession count and, in the end, were undone by a 90th-minute winner from substitute Tom Bayliss.

“They're a very good team and we knew how they'd threaten us but we didn’t want to take away from what we're about, so we wanted to impose our ability on and off the ball. We did that for the most part.

“We imposed ourselves on the game from the first minute right up until their goal, and in my time here, that's the most complete performance we've seen. We're starting to progress, we're starting to dominate in areas we want to dominate.

“Unfortunately, these things happen in football, and while we will be down and upset about it but we can't dwell on it. We've got to be proud of what we achieved tonight and know that performances like that, if we continue them, will help us pick up wins.

“We need results, but I'm really confident if we continue in that frame of mind with those levels of performance, then we'll win games.”

Jackson added: “We have to recover our minds well, and we look forward to the next game, and I'm glad it's coming on Saturday.”

On new arrivals…
“There is no news on any new players coming in just yet. We're looking to add to our forward line, as well as the back line and we're going to work hard in the last bit of the window to pull some deals out the bag. We only want players who can enhance our squad and hopefully we can get our targets.”

On Warren O’Hora…
“Warren underwent surgery the other day, and is out probably until the end of the season which is a big blow for us. He's had a small fracture on his foot, an impact injury when he landed on it.

“He came through surgery successfully so he's on the road to recovery now. You can't keep him away, though, he wants to support the team. Even though he won't be available for selection, he'll play a massive part in how we'll galvanise the players.”

On Jonathan Leko’s home debut…
“We want the players to be creative and get at defenders and I want to see wide players run at the opposition and take them on, and he can do that. He's still getting up to speed, and he played longer than we expected tonight, so we have to be careful with him but I was really pleased with what he gave the team.”

On Paris Maghoma’s bow…
“He came on, looked calm and assured. We know his qualities - he's a player we feel can come in and really enhance the team. He has only trained once with us, and has been getting back up to speed. Having come in and only met the lads once, it was best for him to impact the game from the bench.”

On managing the squad…
“We've got a big talented squad and we'll look at each game on how we need to approach it with which personnel will impact the game. Some players miss out sometimes, but it's a squad game. We'll look at Exeter now and see how we can impose ourselves on them, what they can do to us, and we'll reassess the squad.”

Mark Jackson's MK Dons will look to bounce back on Saturday when they welcome Exeter City to Stadium MK. 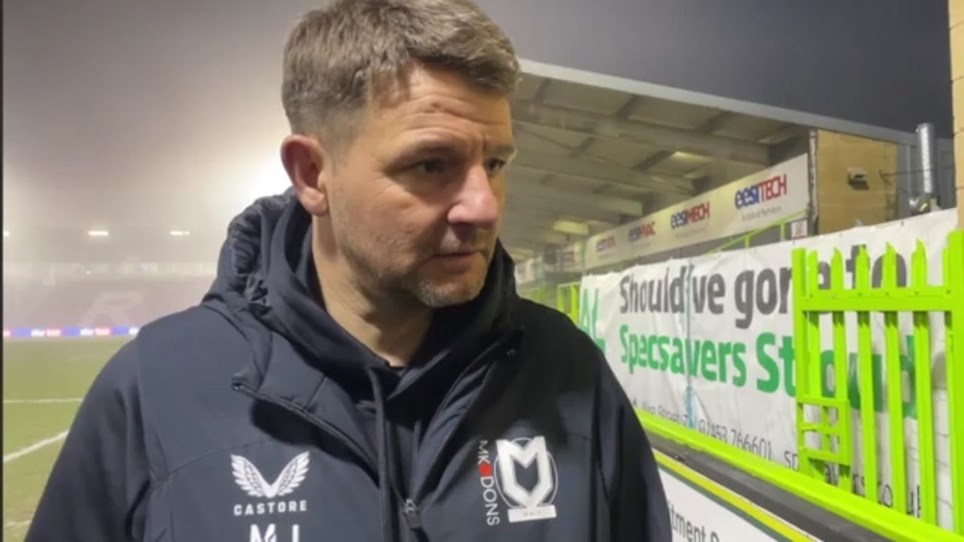 
Mark Jackson was frustrated not to pick up three points in Saturday’s Sky Bet League One clash with Lincoln City but believed elements of the performance provide optimism for the future.