MK Dons Women progress into the second-round of the Vitality Women’s FA Cup, after they prevailed in their maiden meeting against Mulbarton Wanderers Ladies.

Charlie Bill made four changes to his side since their last tournament tie in the FAWNL Cup. Darcy Guy was re-introduced between the sticks, alongside teammates Angelina Nixon and Hannah Samuels, who also made their return to the field and were named in the starting XI.

Leoni Miceli was awarded her second start for the Dons, which also granted the number 15 with her tenth appearance so far this season. 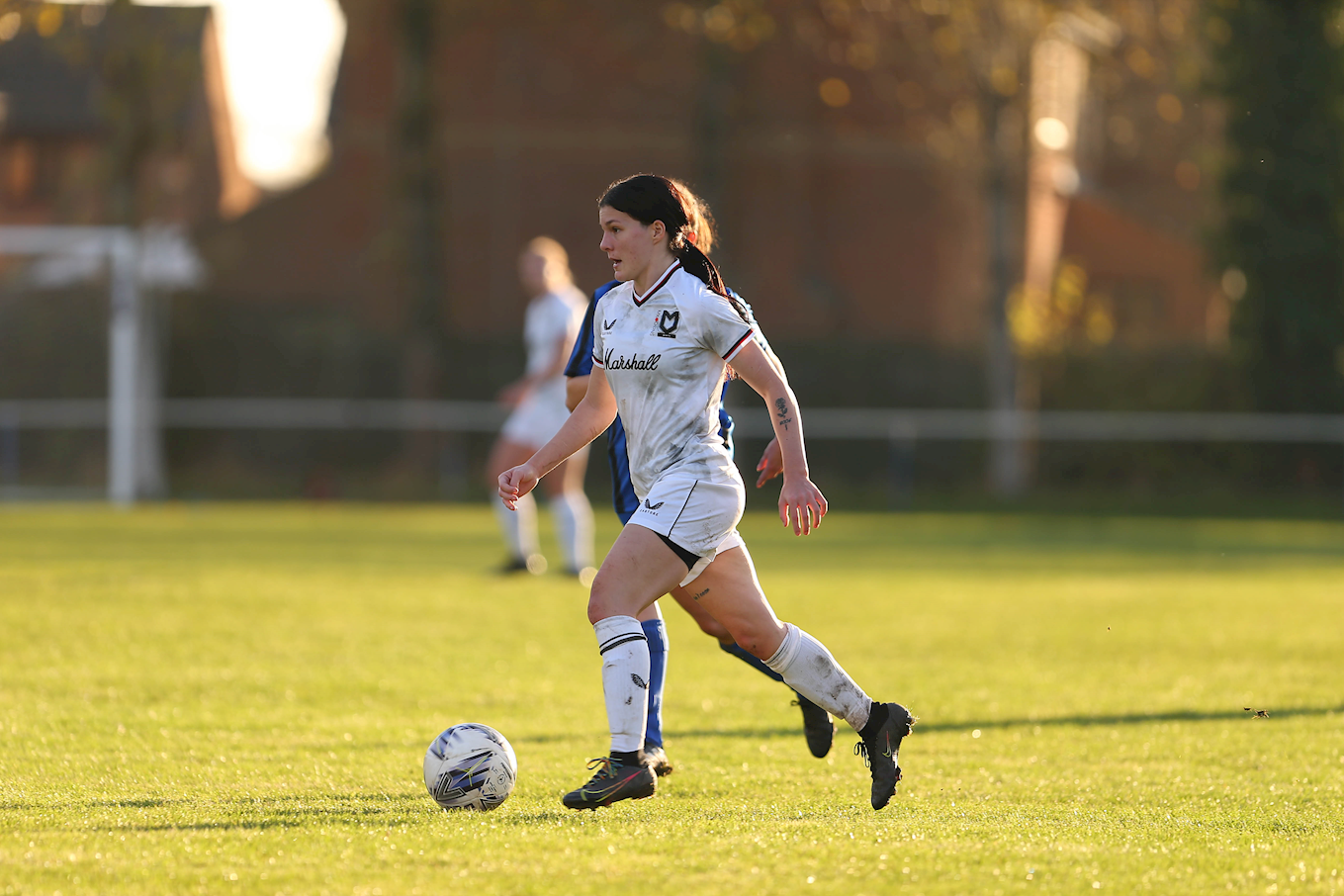 Maia Gabriella, who represented the Under-23s received her first call-up to the MK Dons squad, in the hope to make her debut for the team in the Vitality Women’s FA Cup.

First-Half
Charlie Bill’s Women came out of the blocks swiftly, a strong start from the home side allowed them to hinder their opponent with an early advantage.

Nicole Pepper opened the scoring five minutes into the fixture, the number ten lined up a shot from outside the area, and her explosive strike blew past the Mulbarton keeper, which broke the deadlock early in the game. 1-0

Pepper’s bright start boosted the Dons’ momentum, which then saw top goal scorer, Mollie Coupar, add two more to her tally within quick succession of one another. 3-0

Coupar’s brace on the ten-minute mark seemed to be the hight of the action in the opening stages of the match. Mulbarton discovered a brief period of control following the third goal, until Coupar netted her hat-trick. Another game, another three goals scored by the number 18. Pepper’s corner into the box located Coupar, who smashed it home. The two goal scorers linked up well to increase their advantage. 4-0

Before the interval Lucy Wood solidified her place on the score sheet and heightened the score to 5-0. The referee signalled for half-time and Darcy Guy, the Dons’ goalkeeper, had yet to be tested by Mulbarton.

Second-Half
Wood then impressed many with her skill and determination to score the sixth of the match. The number 11 picked up the ball in the middle of the field before she beat three opposition players, this allowed her the space to slot it past the Wanderers keeper. 6-0

Laura Mitchell, who took to the stage in the 48 minute found her fourth goal of the season. The midfielder delivered another to the tally and Charlie Bill’s Women led by seven as they entered the latter stages of the fixture.

Amy Mclean then crafted the killing blow against Mulbarton Wanderers, who looked to exit the Vitality Women’s FA Cup. Another goal which was created from a corner set-piece. 8-0

Unfortunately for Guy, the clean sheet she desired dissipated as the opposition picked out the top-corner from their late free-kick. An unstoppable attempt, which granted a consolation for Mulbarton. 8-1

Following their first-round triumph, MK Dons will prepare to face Worthing Women in the next stage of the Vitality Women’s FA Cup.