Liam Manning was delighted to secure a big three points for the MK Dons supporters in Tuesday’s clash with AFC Wimbledon at Stadium MK.

Manning’s men were professional in their performance and comfortably run 1-0 winners thanks to Matt O’Riley’s 30th-minute strike and a clean sheet from Franco Ravizzoli on his league debut.

“It's a massive win for the club and the fans,” Manning said in his post-match press conference. “I loved (the occasion) – the fans were terrific and really helped us over the line.

“It was a really professional performance and everyone showed a collective spirit and professionalism. We didn’t concede a shot on target in the second half and we showed control to get the three points on the board.

“The danger, sometimes, when you're facing 10-men is to go and chase it but we didn't need to do that – instead, we controlled it, managed it and made sure we ended with three points.

“We had chances too – Theo (Corbeanu) had one at the back post and Twiney (Scott Twine) had one too.”

Manning added: “It has been a decent night but we can't get carried away. It's a big win but you still only get three points and there's still a lot of football to be played. We're already looking to Saturday.”

Delight for Franco…
“He did well tonight. Franco is a terrific character, a real team player, and he stepped in and did well. He showed good composure and his kicking was good too. It's huge credit to him and Lewis Price for the work they put in because he has got better every game.

Theo looks bright on debut…
“He should be pleased with how he did tonight. He brings a different dimension to us as he looks to take people on. He looked a real threat – one time, he cut inside onto his right foot and flashed one just past the post. He's only had one session with us so he's still getting up to speed.”

Mo’s ‘team-first’ attitude…
“Mo wants to score goals but our culture is team first and he did exactly what the team needed him to do tonight. He led the line, played off the shoulder, chased, fought off long balls and that’s all really important. Goals will come for him, I have no doubt about that, but he has to also keep up that desire to run and compete.”

Tennai takes chance…
“Tennai stepped in and did well. He got forward well and allowed Theo to drift wide. He almost scored in the first half too but Harry Darling got a block on it!

First-team experience for goalkeeper Ronnie…
“It's a terrific experience for him. We really like Ronnie. He's progressed well through the academy and experiences like tonight will only help him. The challenge now is to get here regularly by turning up every day and driving Pricey (Lewis Price). He has to want to be the best keeper he can be. The Club has a huge history of bringing through academy players and, as always, credit to the academy for what they've done.”

Liam Manning and MK Dons are back in action this Saturday when they take on Portsmouth at Fratton Park.


Liam Manning labelled Tuesday’s performance as one of MK Dons’ best this season. 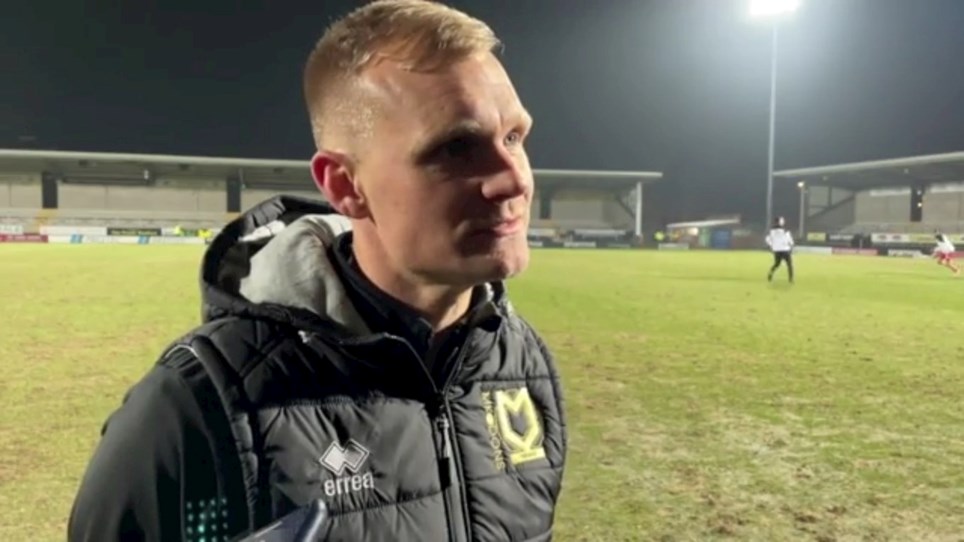 
Liam Manning labelled Tuesday’s performance as one of MK Dons’ best this season.