Jon Goodman views Tuesday’s FA Youth Cup defeat as a harsh lesson for his MK Dons Under-18s squad, who he expects to bounce back from the loss.

The Young Dons, who were reduced to ten men, were beaten 2-0 in extra-time by Ware at Stadium MK, exiting the competition at the First Round Proper stage.

Reflecting on the tie with iFollow MK Dons, Goodman provided his assessment on the performance and what he expects from the group moving forwards.

“It’s hard not to take it out of context,” he said in the aftermath of Tuesday’s defeat.

“We’re incredibly disappointed. It’s one game but there’s lots of areas where I am frustrated, because this game is a reflection of where we are at. We should be aspiring to be a lot better.

“We played reasonably well, dominating the ball, but the frustration is that we didn’t have the ability in the final third to score a goal. We’ve been attractive at times but lacked the competitive edge you need to win a game.

“We’re at the stadium, it’s a showcase game and we were expecting the lads to show what we were about. We needed to do a lot more than we showed.”

He continued: “It’s a guarantee in football that you’re going to get disappointments. They need the setbacks to remind themselves of the standards they need to hit to be successful and to keep us humble enough to continue to learn. It’s a tough experience for us all but it’s not going to define anyone’s career.

“It gives us plenty to work with, which is important. We try to create pressure moments in training, which is never quite the same as the real thing.

“It reinforces to the lads that, if they don’t do the fundamentals well enough then you aren’t going to win. If they are to go on to play for the first team, there is going to be this expectation on them every week.”

One positive for Goodman was the performances of the schoolboys which featured in Tuesday’s tie, including Under-16s Jayden Ogwuazor and Charlie Smith who both started the match.

“The bench was full of schoolboys, which was great. Jayden slotted in at left-sided centre-back and did well in his first start for us and I really liked what Charlie Smith did tonight too.

“I feel positive about the Under-15s and Under-16s while we continue to work with and improve our Under-18s because they are a fantastic bunch of players too.” 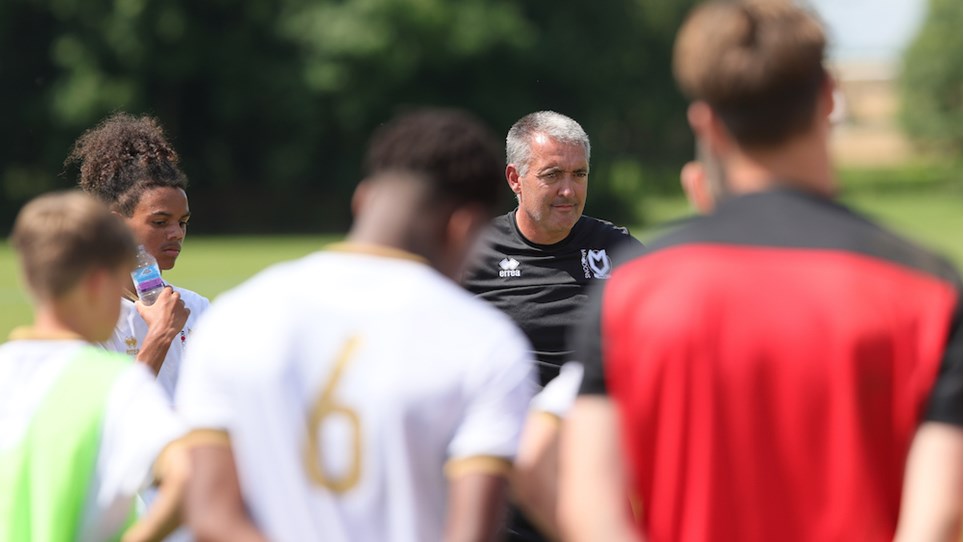 
The Academy players have displayed their potential throughout the 2021/22 season, which has allowed a few of the young Dons stars to be granted with the opportunity to train and play alongside the...