MK Dons welcome Portsmouth to Stadium MK this afternoon looking to end the calendar year on a positive note by securing their third straight home win.

Russell Martin’s men have enjoyed home successes over Coventry City and Oxford United so far this month and will want to maintain that form with a result that could, if results go in their favour elsewhere, be enough to see them move out of the bottom three in Sky Bet League One in time for New Year’s Day.

They go into the match on the back of two disappointing performances away at Gillingham and Southend United but the Dons remain optimistic, not just because of their recent home form, but the healthy state of the frontline.

Joe Mason, Sam Nombe and Rhys Healey are all fit for the first time this campaign and were all involved in the goals on Boxing Day – Mason and Healey found the net while Nombe contributed to the former’s opener.

Boss Martin will hope his frontmen can be on song again today and fire the Dons to an important home win. Kick-off is at 3pm.

THE OPPOSITION
Portsmouth are the form team in Sky Bet League One heading into this afternoon's match at Stadium MK.

With four wins to their name over their last six encounters, Kenny Jackett’s side have climbed to eighth in the table and they will have eyes on the play-off places heading into 2020. That said, away from home is where Pompey have struggled the most, with just two victories to their name in 2019/20 and only one since the start of October.

In terms of goals, Ronan Curtis is the main man for Portsmouth having found the net nine times already this term. John Marquis and Ellis Harrison are also players to watch out for – they each have scored four goals.

LAST TIME OUT
MK Dons twice surrendered a one-goal advantage as they were held to a 2-2 draw by Southend United at Roots Hall.

Joe Mason put the Dons ahead on Boxing Day with his fourth goal in six games but Jason Demetriou levelled for the hosts from the penalty spot.

Substitute Rhys Healey marked his return from injury with a goal to restore the Dons’ lead, but that lasted just two minutes as Southend, again, equalised – Rob Kiernan heading in the decisive leveller from a corner.

After a tightly-contested hour, Ben Close put Pompey ahead, firing home a loose ball after Ellis Harrison had hit the post from six yards.

Kenny Jackett’s side then doubled their lead through Curtis, who got the deftest of touches to Marcus Harness’ venomous cross.

FIGHTING TALK
Russell Martin: “I can’t wait to get back to our home pitch. At home, our performances have been really good and our last two results have been good too. I’d like to think that it will be a game that will suit us better than the last two did.”

TEAM NEWS
Russell Martin revealed no fresh injury concerns for MK Dons when he met with the media after the Boxing Day draw with Southend United. Sam Nombe made his first start since September in that match at Roots Hall while Rhys Healey came off the bench for his first appearance for three months. Both are expected to be involved again this afternoon.

Jordan Moore-Taylor remains the Dons’ only absentee. He is expected to the upcoming home matches due to a knee problem.

Portsmouth look set to be without defender Ross McCrorie due to a hamstring injury.

Lee Brown and Brandon Haunstrup are not expected to return before the New Year while Bryn Morris and Jack Whatmough are also doubts.

This is Doughty’s first season in the EFL and Sunday will be the first time he has refereed either the Dons or Portsmouth. 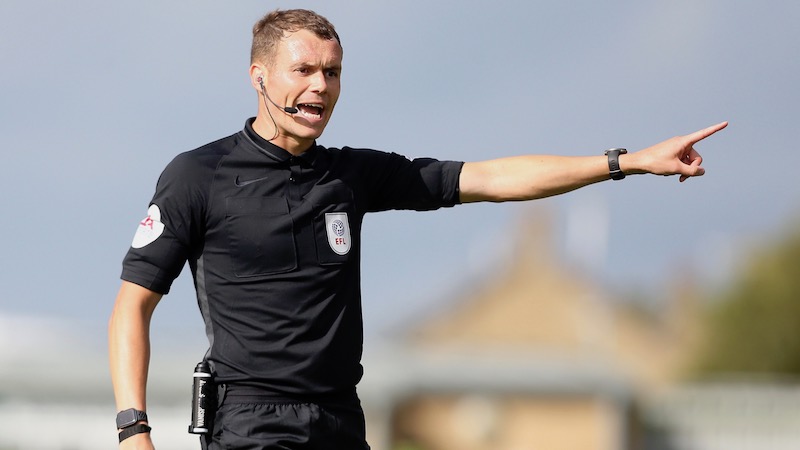 So far this season, the rookie has shown 46 yellow cards and two red cards in 16 matches. He has also awarded six penalties.

Kevin Howick and Paul Lister are the assistant referees while Stuart Butler is the fourth official.

Can't make the game? Supporters will be able to watch this match on iFollow MK Dons for just £10 - click HERE to purchase a Video Match Pass!

You can also stay in touch with the action via mkdons.com’s Match Centre, which can be accessed by visiting the home page from 2pm.

There will also be full coverage on the Club’s social media channels while a full match report will be available to view on mkdons.com straight after the final whistle along with full reaction from Russell Martin and a player. Highlights will be available three hours after full-time.