Paul Tisdale viewed Tuesday’s testing Checkatrade Trophy tie with Luton Town as a valuable learning experience for some of his young players.

Tisdale made eight changes for the trip to Kenilworth Road and handed starts to a number of his young professionals.

Despite positive spells, his side found themselves on the wrong end of a 3-0 scoreline and while disappointed with the result, Tisdale believes the experience may prove beneficial for both him and his squad in the long-term.

“It was a good learning curve for a few today,” he told the media after the match. “That's what this competition is about - playing some of our young emerging players, who need to learn those details.

“We’ve learned some lessons for sure and it gives me context as a manager. The young players dazzle at times but they have to learn the nuts and bolts which tie them together. If we're looking at young players becoming selectable, these are the nights they learn their lessons and put things together.”

On the performance, Tisdale said: “I'm relatively happy with how we played at times but not the scoreline, of course.

"One or two bits of naïve defending cost us - both goals in the first half were goals I’d have been very disappointed with conceding on a Saturday from a first team player.

“We showed a lot of intent and purpose in the second half and we raised our game significantly. We were unlucky not to score a goal. We could have made it 2-1 in early in the second half but their keeper made a very good save - it's a shame because it would have changed the game.

“I thought Oran Jackson, Mitch Hancox and Callum Brittain really stepped up and showed intent in the second half. Overall, I'm not too unhappy with the squad.

Tisdale also reserved some praise for the 208 travelling supporters who made the journey to Kenilworth Road on Tuesday evening.

Here’s what else we learnt from Tisdale’s post-match press conference...

On the half-time substitutions...
“I rarely make three changes at half time, but it needed that impetus after half time. Chuks [Aneke] had been booked and was getting a bit fractious – I didn't want that game to end with 10 men. Ouss [Cisse] took a nasty kick on the stroke of half-time - I'd have left him on otherwise. I then didn't want to leave Dean Lewington out there in an unfamiliar position on a Tuesday night.”

On Dean Lewington playing in central midfield...
“I looked at the big picture. I wanted to see him in that position and I think he did extremely well. Maybe it will be a position in the future that will suit him. It meant I was able to play Mitch Hancox too and he needs to play - he is a very bright, punchy player and he did really well tonight.”

On importance of the Checkatrade Trophy...
“I'd love to go through to have more of an opportunity to see more of [the squad]. We've got a large squad at present, bigger than maybe we would ordinarily keep, and this competition provides a useful opportunity for them, in games with some bite and some spark - it’s not a reserve game, it's a meaningful game for both sides. In terms of me learning, and players on the fringes having a chance to play, it's a really good competition. Once you're through the groups, it then changes completely when there's a possibility of Wembley.”

Paul Tisdale and MK Dons return to Sky Bet League Two action on Saturday when they travel to The Abbey Stadium to take on Cambridge United.

Tickets for Saturday's clash with Cambridge United are priced at £20 adults, £15 concessions/wheelchair users and only £1 under-18s while under-5s go FREE, if bought in advance of matchday from MK Dons. Tickets purchased on the day of the game at The Abbey Stadium will be subject to a price increase as detailed below.

Travel is available for this fixture at a price of just £13 Season Ticket holders and £14 all other supporters. Coaches will depart Stadium MK at 12 noon.

To book tickets/travel click HERE, visit the Box Office at Stadium MK or call 0333 200 5343. Tickets will remain on sale from 5pm on Friday. What we learnt: Tisdale's Exeter presser


Paul Tisdale is expecting a tight encounter on Saturday as his MK Dons side and Exeter City put their unbeaten records on the like at Stadium MK. 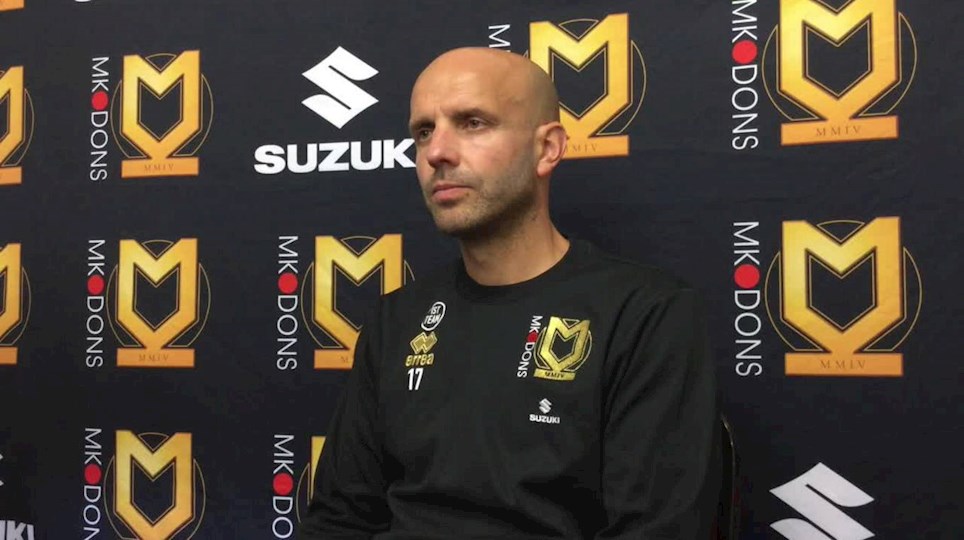 
Paul Tisdale was pleased with the second-half response from his MK Dons players in their 1-1 draw with Grimsby Town at Stadium MK. 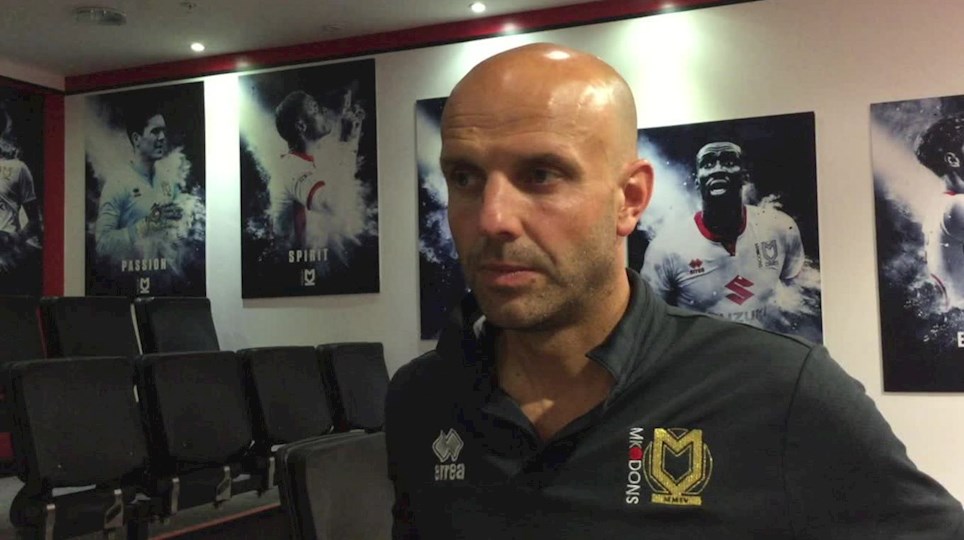