Robbie Simpson hopes to make an impact both on and off the pitch this season, after reuniting with manger Paul Tisdale at MK Dons.

Simpson sealed a short-term move to Stadium MK on Monday, joining from Exeter City where he had spent the past two seasons.

The forward has over 300 career appearances to his name, having played for the likes of Cambridge United, Coventry City and Huddersfield Town, as well as the Grecians, and he is hopeful that his experience can prove to be a valuable asset for MK Dons this campaign.

“I can already see the talent in the young players that are here and I hope my experience can really help them to blossom,” he said after making his first appearance in Monday’s 5-1 win over St Neots Town.

“I'm a hard-working, experienced forward who can play in a few different positions. I like to think I can make others around me play better and bring others into the game - I'll be looking to do that here.” 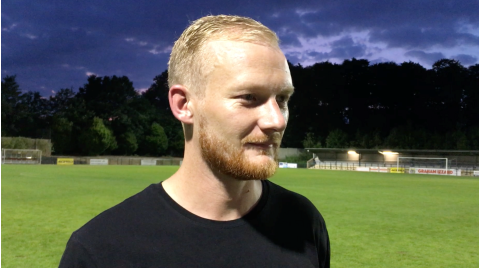 He continued: “This team has had knocks in the last few years but the players are all talented. It’s about getting confidence and belief back at this club - it won't be a case of throw everyone out there and watch us be world beaters, it's a process.

“I think we can be very, very good and the sooner we can click the better. With the manager Tis, who I know really well from Exeter, I think this is a good project and there are good times ahead for the club, I’m sure.”

Simpson was handed his first run-out of pre-season during the second half of Monday’s friendly with St Neots Town and he will be hoping to feature again this evening when MK Dons travel to Brackley Town.

“First and foremost it's about match fitness. You can do all the running in training but you can tell from a game just how far away you are or how close you area.

“It was good to touch of the ball again on Monday. I've still got some catching up to do but it’s great to be out on the pitch again playing games.”

To book tickets click HERE, visit the Box Office at Stadium MK or call 0333 200 5343. Tickets will remain on sale right up until kick-off for both games.