Who caught your eye the most during the month of December? Now is the time to cast your vote with the possibility of winning two hospitality tickets for doing so.

MK Dons were only in action five times during the month, picking up one win and draw over those matches.

The victory came against Carlisle United at Stadium MK courtesy of goals from Jordan Houghton and Kieran Agard.

After back-to-back defeats over Christmas, the Dons picked up a point away at Northampton Town with Alex Gilbey and Chuks Aneke on the scoresheet for Paul Tisdale's side.

Fans are able to register their vote using the survey below, voting closes at midday on Thursday 17th January.

Create your own user feedback survey

The winner will win two places in clubGold for two the upcoming clash against Crewe Alexandra. Including a buffet lunch, half-time refreshments, teamsheets, matchday programme, directors' balcony seats, access to Man of the Match presentation and of course presenting the Royal Cabs Player of Month Award to the winning player before the game.

On top of this, Royal Cabs will really make the winner feel like a VIP, by collecting them from home and bringing them to Stadium MK. Then after the post-match man of the match presentations are over, the winner will be picked up from outside the stadium and dropped home. (Pick-ups and drop-offs to Milton Keynes addresses only.)

To be eligible to win, please provide a name and contact number/email on the voting below above and select that you are available to attend the game on Thursday 17th January. 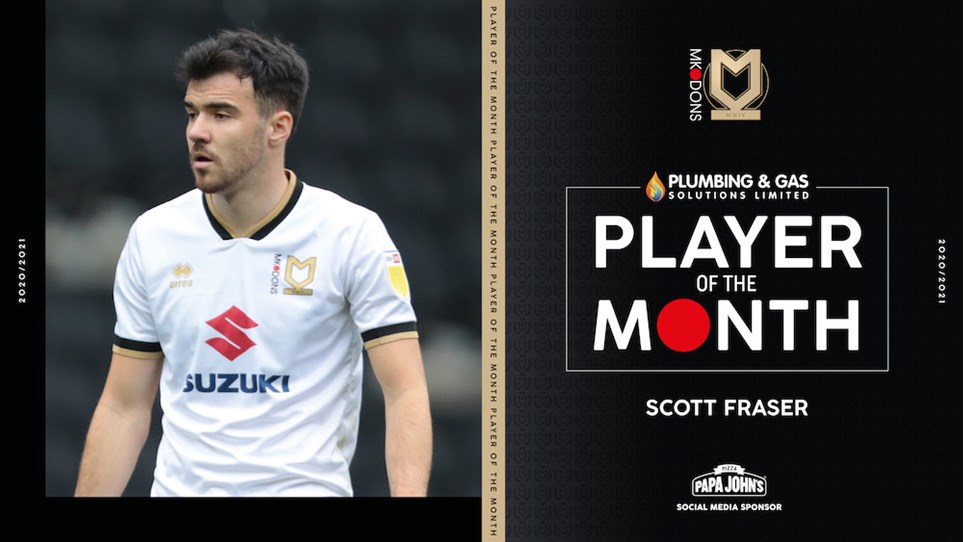 Fraser named Plumbing and Gas Solutions Player of the Month


Scott Fraser has been named Plumbing and Gas Solutions Player of the Month for the Month of November.

Fraser named Plumbing and Gas Solutions Player of the Month


Scott Fraser has been named Plumbing and Gas Solutions Player of the Month for the Month of November. 
Callum Brittain has been named as the Plumbing and Gas Solutions Player of the Month for August. 
There is still time to vote for your Royal Cabs Player of the Month for February, with the winner to be announced this weekend at Stadium MK.


MK Dons will begin pre-season training on Monday 20 June in preparation for the 2022/23 campaign.


MK Dons are among the 14 teams participating in the Junior section of the 2022 STATSports SuperCupNI – formerly known as the Milk Cup.


The Box Office and Club Superstore at Stadium MK will remain closed until Monday (30 May).

Matt Smith joins up with Wales


Matt Smith has linked up with the Wales national team ahead of their five fixtures in June.