Stadium MK is already a flagship for disability provision and is now one of the first EFL Clubs to install a fully-equipped specialist disabled changing facility, under the national Changing Places scheme.

This exciting new project has only been made possible thanks to the amazing fundraising efforts of the MK Dons Supporters Association (MKDSA) and support from the home improvement retailer Wickes, its social enterprise partner Volunteer It Yourself (VIY) and young volunteers from Milton Keynes College.

It was in late 2016 when the Club was approached by the MKDSA about the possibility of building the specialised disabled toilet facility at Stadium MK, inspired by the needs of a young Season Ticket holder, Kieron Norton.

The Changing Places washroom facility provides everything that a supporter with a disability may need to maintain their privacy and retain their dignity by including essential specialist equipment such as a full-room hoist, adult-sized changing bed and washing facilities.

The MKDSA committee members agreed to help and undertook the challenge of coming up with a programme of events to raise funds to cover the cost of equipment for the Changing Places Project. What happened next was nothing short of miraculous.

Kieran Agard donated his match-worn MK50 shirt to the MKDSA to auction at a Fans Forum and it raised a staggering £800 to kick-start the project.

The MKDSA also held a football tournament at Stadium MK between supporters teams from Watford, Northampton Town, Stevenage and Crawley Town as well as their own MKDSA – this added over £2000.

That’s not all. A group of MK Dons supporters undertook a charity cycle ride to Southend United and donated to the fund; a Just Giving page added more; and the hard-working MKDSA committee members arranged bucket collections and quizzes. The ultimate total came at a pace nobody could have dreamt of.

In the meantime, the Stadium Operations Team at Stadium MK identified an underused toilet and adjacent store cupboard as a suitable location for the facility and concentrated on finding the most cost-effective way of transforming the space.

Working with EFL Community Partners Wickes, the Club were introduced to the VIY scheme which allowed specialist mentors to work with local student volunteers from Milton Keynes College alongside the in-house Stadium MK maintenance team to create a facility of the highest quality specification.

With a scope of work including bricklaying, painting, decorating and tiling, the venture enabled the students to benefit from practical work experience which will allow them to boost their apprenticeship and job opportunities.

A number of stadium contractors donated their time and materials alongside Wickes, who contributed materials and funded the cost of mentors through the VIY scheme.

Steve Ashby, Store Manager at Wickes in Milton Keynes, said:“We’re delighted that we were able to help MK Dons by ensuring that the volunteers had the materials and tools they needed for this renovation.

“It is great to be involved in such a fantastic project which gets young people excited while teaching them useful skills.

Sue Dawson, Operations Director at MK Dons, said:“We are absolutely thrilled to have been able to create this new Changing Places disabled changing facility, working with local partners, Wickes and VIY, and of course the MKDSA.

“We’re committed to providing a welcoming environment for all our visitors and ensuring that they have everything they need to enjoy their experience at Stadium MK. It has been heart-warming to see just what we have achieved by working together on such a worthy project.”

Located at the top of Gate 6, the facility will have the added benefit of being available for use by visitors to Arena MK.

The Club and the MKDSA committee would like to say a huge thank you to everyone that donated, everyone who helped organise or joined in with any of the fundraising events along the way and all of those who worked on the building of the facility – all of whom have made it possible for this project to be completed in record time.

All MK Dons supporters can feel proud that we now have a facility at Stadium MK that is one of the best in any stadium. The Changing Places Project will remain as a lasting legacy to all those that supported this venture. 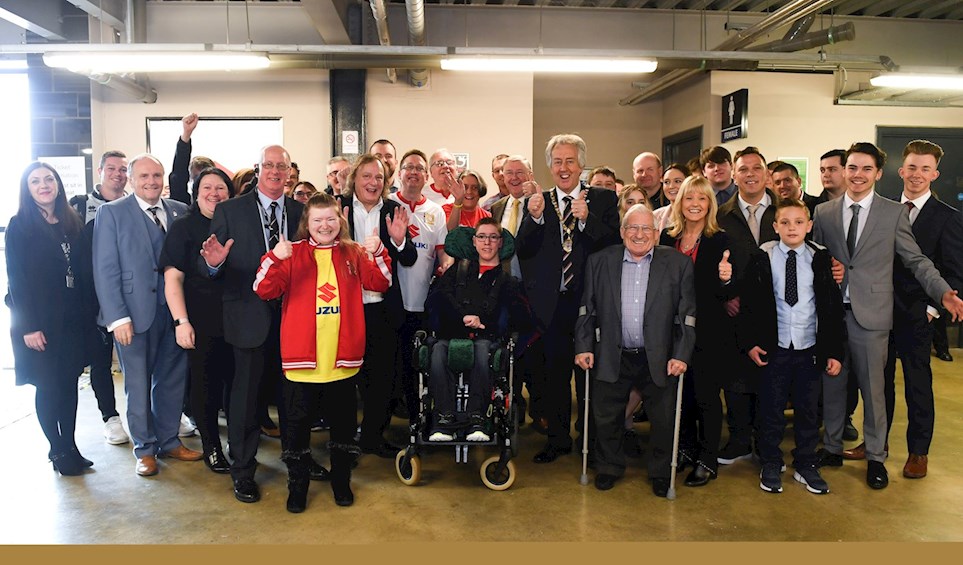 
Stadium MK is already a flagship for disability provision and on became one of the first EFL clubs to install a fully-equipped specialist disability facility, under the national Changing Places... 
MK Dons will be running three stadium tours next month in the build-up to the Ability Counts Big Day.