MK Dons were forced to settle for a point after a strong performance against high-flying Oxford United at Stadium MK.

Former Don Rob Hall opened the scoring but that was cancelled out by Callum Brittain’s superb strike on the hour.

The men from MK1 dominated the game from then on in, however, they were unable to find the winner.

The fixture started at a frenetic pace with both sides looking to try and exert their authority on things from the first whistle.

It was the visitors who did on eight minutes when, after some neat football on the edge of the Dons box, Hall curled home with a smart left-footed finish.

Shortly afterwards, Jon Obika forced Lee Nicholls into a save before James Henry fired wide from 20 yards while, at the other end, the Dons were finding it difficult to create chances after a lively start.

However, good work on 25 minutes from Gboly Ariyibi down the left created an opportunity for Ryan Seager but he saw his shot blocked from 12 yards.

That was followed by a purposeful run from Aaron Tshibola but, after a one-two with Pete Pawlett, he was crowded out on the byline.

The Dons were looking dangerous and Ed Upson found Pawlett, who subsequently picked out Tshibola although he wasn’t able to get enough on the cross as he stretched to meet the right-wing delivery.

Substitute Brittain almost made an immediate impact, skipping past two men before forcing a good save from Simon Eastwood – Seager was denied on the rebound.

Neilson’s men were dictating play with Gilbey and Upson in particular looking to unlock the U’s defence but the visitors held firm, to half-time at least anyway.

When the second half got going, the Dons were the side doing most of the running and Golbourne fired a dangerous cross across the box before shooting wide himself.

However, it was all hands on deck on 57 minutes when a ball into the box caused problems in the Dons box, but Tshibola was in the right place at the right time to clear.

The men from MK1 made their next foray forward count as Brittain cut in the right and sent a superb strike into the far corner from the edge of the area – a great way to score your first senior goal and draw the Dons level!

Nesbitt was introduced midway through the second half and he was involved as the Dons went forward on 70 minutes but the U’s cleared the danger.

He and fellow new boy Gilbey, who impressed on his debut, then came close to meeting Tshibola’s teasing cross from the right – the Dons were pushing for a winner.

The pressure was building and substitute Robbie Muirhead fired narrowly wide across Eastwood’s goal after being freed down the left-hand side.

A high-tempo and intensity was the key to the Dons’ improved display turning that into a second goal was still eluding them as the game went into the closing stages.

They were forced to do some defending for the first real time in the second half on 84 minutes and fortunately for the Dons, Jack Payne skied over when well placed.

The game was soon back at the other end once again and Muirhead saw a shot blocked before the visitors had to clear a delivery from Ariyibi, who then got in down the left but was denied as he looked for a team-mate.

Brittain sealed his man-of-the-match performance with two crucial bits of defending in the final two minutes of normal time – the second to get back and clear after Gino van Kessel had knocked the ball past Nicholls.

There was still time for two Dons chances – Gilbey couldn’t get enough on a left-wing cross before the energetic Golbourne curled over. 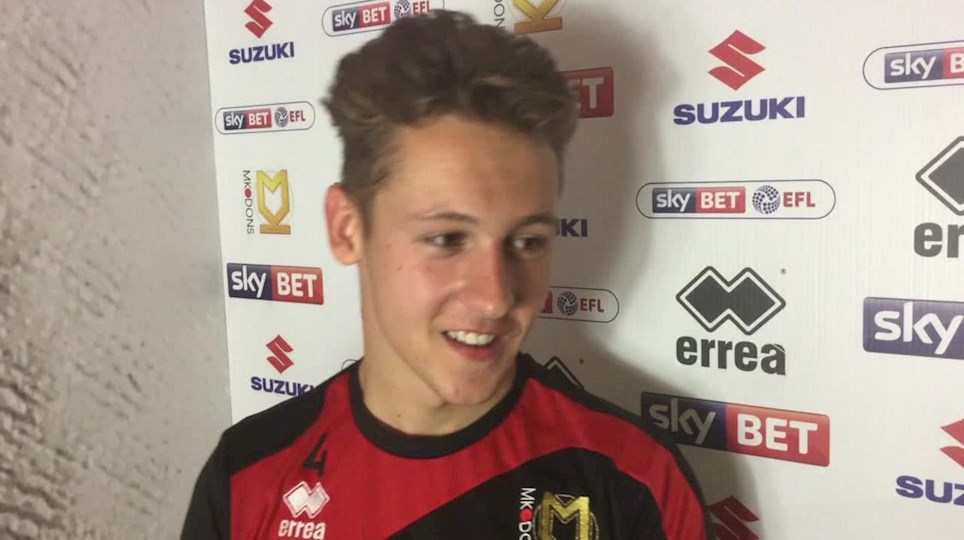