MK Dons make their eagerly-anticipated visit to AFC Wimbledon tonight, looking to make it back-to-back Sky Bet League One victories for the first time this season.

Robbie Neilson’s side beat Rochdale last weekend to climb up to 13th in the table and with the rest of the division not in action until Saturday afternoon, they have an opportunity to move into the top-half by taking maximum points from this evening’s game.

Should they do that, they would also, in turn, register their first victory against AFC Wimbledon at the Cherry Red Records Stadium. Despite boasting a strong record over their opponents having won three of the previous five meetings, the men from MK1 were beaten in their one and only visit to South West London.

A win tonight then would not only remove the bitter taste from last season’s disappointment but also provide the Dons with a great platform to build from in Sky Bet League One, heading into a busy schedule of games.

AFC Wimbledon currently sit three places and two points below the Dons in the table.

Neal Ardley’s team, who will be looking to improve on their 15th-placed finish from last season, picked up their first win in four matches last weekend – an impressive victory over Blackburn Rovers at Ewood Park.

The division’s lowest scorers with only five goals to their name, AFC Wimbledon have collected four points from their four home matches, conceding four times and scoring just three in reply.

However, as the cliché goes, form tends to go out of the window in matches such as this and despite their superior league position and points total, the Dons will certainly be expecting a testing evening in the capital.

Opponents Rochdale went ahead on eight minutes through Brad Inman but the Dons replied just five minutes later with a goal from Gboly Ariyibi.

The winger doubled his tally four minutes before half-time with a stunning strike from distance but it wasn’t enough to give his side the advantage at the break, as Dale scored once again through Matt Done.

That set up a tense second-half and with six minutes to go, the Dons secured victory courtesy of Seager, who fired home from just inside the area after latching onto Ousseynou Cisse’s through pass.

AFC Wimbledon beat an in-form Blackburn Rovers side to register an impressive away victory.

The hosts started strong but fell behind to Kwesi Appiah’s 16th-minute goal – the striker reacted quickest after his initial shot was blocked.

Appiah had a chance in the second half to double his tally but David Raya tipped his shot wide to keep the scores at 1-0.

Dominic Samuel then directed a header over the bar for Rovers before Dack went even closer to an equaliser late on with a header which was brilliantly pushed wide by AFC Wimbledon goalkeeper George Long.

Robbie Neilson: “It’s a huge game for us all. We have to make sure we are up for the game and we win our battles but also play our football because we believe that’s what will bring us through in the end.”

“We’re against a difficult opponent at a difficult venue but you want to play at stadiums where the atmosphere is intense. I felt it was a good atmosphere last year and hopefully we can come through it on Friday.”

Neal Ardley: “I know how important it is to everyone at the club. It is a big game. My job is to deal with that in the best way possible and make sure the players do not feel pressure but feel spurred on by it.

“It will be a very highly-charged game, our fans will make sure of that. We will do our best to put in a performance that gives us the best chance of giving the fans what they want. It will be an emotional night.”

The Dons hope to have Ethan Ebanks-Landell available for selection after he returned to training this week. The defender has been sidelined for almost three weeks with a foot injury.

There is also optimism that Chuks Aneke could, once again, be included in the matchday squad. Aneke, recovering from a hamstring problem, missed Saturday’s win over Rochdale after experiencing muscle tightness following his run-out for the Under-23s last week.

That leaves Joe Walsh (knee) and Peter Pawlett (knee) as the Dons’ only definite absentees. AFC Wimbledon will welcome back midfielder Jimmy Abdou, who has completed a three-match suspension for the red card he received earlier this month.

Defender Paul Robinson should also be available after making a return from injury in the win over Blackburn last weekend, while Darius Charles and Tom Soares are edging closer, but Will Nightingale and Callum Kennedy are injury concerns.

The experienced Mike Jones is the man in charge of tonight’s game.

Jones primarily officiates in the Premier League and has done so since 2008 when he was promoted to the Select Group of referees. 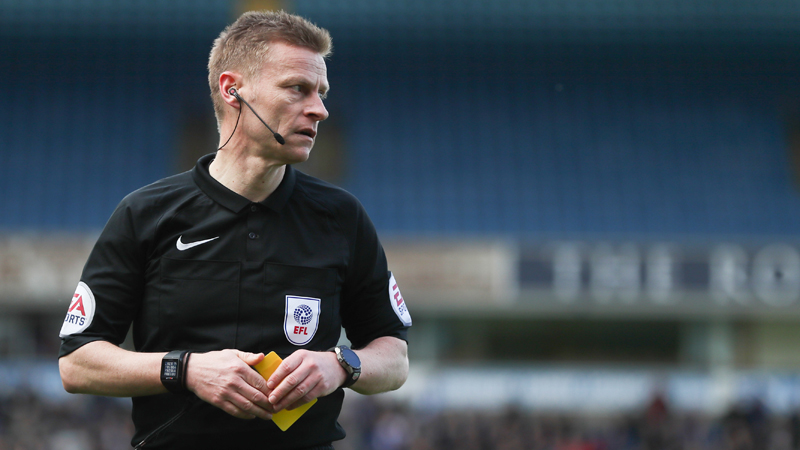 His last Dons appointment was back in February 2013 for the FA Cup tie with Barnsley. That afternoon he produced four yellow cards and sent off Alan Smith for a serious foul play. He has never before taking charge of AFC Wimbledon.

Tonight’s assistant referees are Mark Scholes and Darren Cann, the latter of which has run the line in a Champions League and World Cup final. The fourth official is James Linington. 
Ticket details for MK Dons’ Sky Bet League One fixture at AFC Wimbledon next month have been confirmed.