MK Dons will be looking to maintain their excellent recent record over Oldham Athletic when the two sides meet at Stadium MK today.

The men from MK1 have won their last six encounters with the Latics, including a club-record 7-0 triumph during the 2014/15 campaign.

Extending that run this afternoon would see Robbie Neilson’s side return to winning ways after going three matches without tasting victory – after defeats to Bradford City and Portsmouth, they were held to a 1-1 draw by Walsall in midweek, despite dominating the Saddlers at Stadium MK.

A triumph may also lead to them closing the gap on the play-off places, should results go their way elsewhere – the margin currently stands at four points.

Oldham come into today's match in terrific form, having avoided defeat in their last five matches – a run which has seen them win four times and hold high-flying Bradford City to a 1-1 draw at their Northern Commercials Stadium.

Their recent run has coincided with Richie Wellens taking charge of first-team matters – the former Latics, Blackpool and Leicester City midfielder has revitalised the Greater Manchester club and was appointed permanent boss in midweek.

Now in full control, his first task will be to improve a defence which has conceded 27 goals already this campaign – only one other team in the division (Bristol Rovers) has conceded more.

In front of goal, though, they have been pretty impressive – their total of 19 scored is bettered by only three teams outside the top six in Sky Bet League One.

Aneke, making his first league start since February, found the net from Ed Upson’s free-kick on 23 minutes – just rewards for a dominant first-half display from Neilson’s side.

He slid the ball beyond Colin Doyle from 12 yards to equalise following Paul Taylor’s thunderbolt which opened the scoring after two minutes.

Robbie Neilson: “I know Richie really well – I played with him at Leicester (City). I know the type of character he is and I know he’ll be desperate to do well there.

The Dons will be without Osman Sow, who suffered an ankle injury after coming on as a substitute in the 1-1 draw with Walsall.

The striker’s injury is currently being assessed in order determine the full extent of the damage, but he will definitely miss this afternoon's clash.

Oldham could be without midfielders Ryan Flynn and Paul Green while defender Ryan McLaughlin is definitely unavailable.

Antony Coggins is the match official for today’s game.

The EFL rookie, who has yet to take charge of a fixture involving either the Dons or Oldham, has refereed 10 games this season and produced 14 yellow cards. He has yet to make a sending off.

His assistant referees are Andrew Laver and Anthony Da Costa while the fourth official is Alix Pashley.

Two goals have been netted in both of the Dons’ last two matches.

Tickets for today's Family Fun Day clash with Oldham Athletic are priced from just £12 adults and £1 under-18s, while under-12s with a Young Dons membership can go FREE. Supporters can upgrade to East Centre for £5 or clubRed for £10.

Played for both: Blackpool


Ahead of Tuesday's clash at Stadium MK, mkdons.com looks at those players who have featured for both MK Dons and opponents Blackpool. 
MK Dons are back at Stadium MK this Tuesday night in the first of three home fixtures. 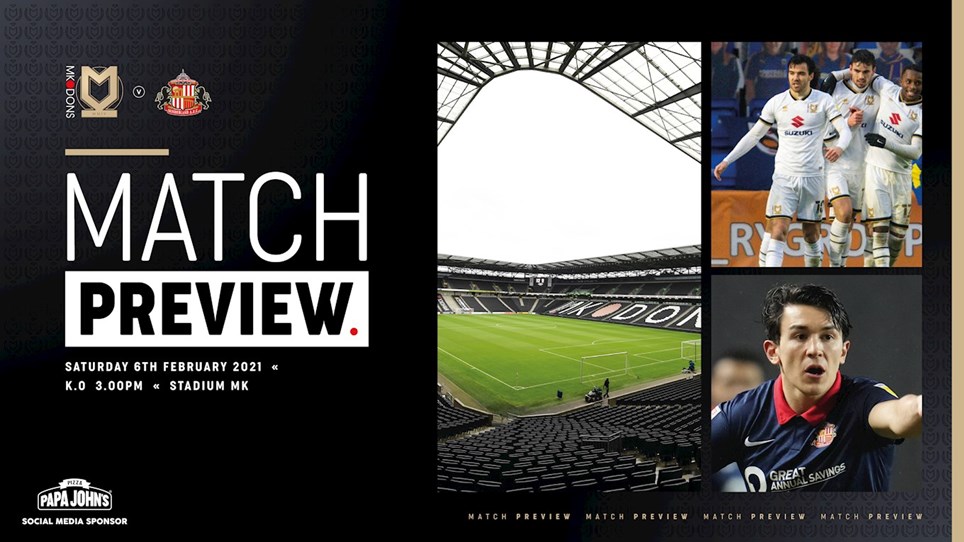 
MK Dons return to Sky Bet League One action this afternoon as Sunderland make the long journey back down to Stadium MK. 
MK Dons take on Sunderland tonight in the quarter-finals of the Papa John's Trophy.