Second-half goals from Tom Nichols and Rory Gaffney saw MK Dons fall to a 2-0 defeat away at Bristol Rovers.

After an evenly-contested first half at the Memorial Stadium, Nichols pounced on a loose pass to open the scoring for the home side. Gaffney then sealed the points for Rovers with a left-footed finish from the edge of the area.

The result dropped the men from MK1 one place to 16th in the Sky Bet League One table, six points adrift of the play-off places.

Dons boss Robbie Neilson made three changes to the side which began the 4-4 draw with Oldham Athletic, with George Williams, Aaron Tshibola and Gboly Ariyibi all coming into the side.

Hosts Bristol Rovers paid a fitting tribute to their former chairman Geoff Dunford prior to kick-off and urged on by a vocal home support, they made a positive start to the game.

Scott Wootton blocked an effort from Gaffney in the third minute before Lee Nicholls watched Nichols’ 20-yard strike fly past his right post. Nicholls then got down well to palm away a deflected effort from striker Nichols on 10 minutes.

The Dons then threatened - Chuks Aneke, after some excellent hold-up play, was almost able to play in an on-rushing Tshibola. A similar chance occurred five minutes later but Ed Upson’s through pass for Alex Gilbey had just a little too much on it.

In the 21st minute, Upson had a curling shot blocked by a defender - the opportunity arose after a surging into the area from Ariyibi which resulted in a Dons corner. Aneke was then denied by a sliding tackle from Tom Lockyer, after he latched onto Upson’s pass into the area.

On the half-hour mark another Ariyibi run saw the Dons earn themselves a corner. From that set-piece, the Dons’ number 7 shot over with an acrobatic, improvised effort.

Soon after that Ariyibi chance, Tshibola had a right-footed volley deflected into the arms of Adam Smith. On the break at the other end, Lee Brown produced a save out of Nicholls at his near post.

An evenly-contested first half ended with Rovers in the ascendancy. Former Dons loanee Chris Lines curled a free-kick over the bar in the 41st minute before Nicholls and Joe Walsh combined to keep out efforts from Liam Sercombe and Gaffney - Nicholls parried away the initial strike from Sercombe and then Walsh cleared off the line from Gaffney’s shot.

The second half began with Williams forcing a save out of Adam Smith courtesy of a low drive from distance.

Nelson’s men then had Nicholls to thank for the keeping the scores goalless on 55 minutes after he did brilliantly to keep out Gaffney’s powerful header - the Dons’ No. 1 got a strong right hand to the effort which then cannoned off the crossbar and was cleared away by Golbourne.

Gaffney had yet another opportunity to break the deadlock near the hour mark but his first-time shot from Sercombe’s free-kick went into the side netting.

Rovers’ dominant start to the second period eventually resulted in them taking the lead on 65 minutes and, again, it came in fortuitous circumstances. Upon, heading it back to his goalkeeper, didn’t spot the lurking Nichols, who pounced on the pass and took advantage of the error by finishing into the bottom left corner. 1-0.

Neilson introduced Kieran Agard and Aidan Nesbitt in the 71st minute, hoping they would inspire his side to complete a turnaround. That task, however, was made all the more difficult just 60 seconds later when Gaffney was allowed to turn on the edge of the area and rifle a left-footed shot into the corner. 2-0.

Aneke bent a shot wide almost immediately from kick-off as the Dons looked to salvage something from the contest. However, they continued to be frustrated in their efforts to do so and were unable, in the final 15 minutes, to prevent a disappointing away defeat. 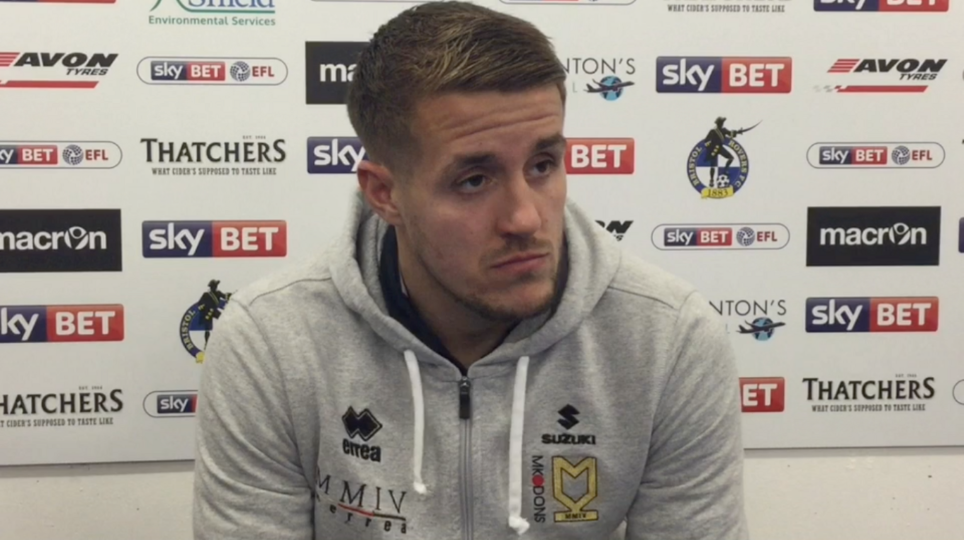