Neilson made four changes to the side who drew 1-1 with Southend United in midweek. George Williams, Ethan Ebanks-Landell and Ed Upson all returned from suspension while there was also a start for Peter Pawlett.

The Dons went into the afternoon unbeaten in their last five matches in all competitions and they made the ideal start in trying to extend that run, with Chuks Aneke firing them into a lead after just three minutes.

Williams delivered a cross in from the right which made it through to the Dons’ number 10, who controlled the ball on his chest before drilling into the bottom left corner from the edge of the area. 0-1.

The ideal start for Robbie Neilson’s side, who could have had themselves a two-goal lead on 11 minutes but the ball was just nicked off the toes of the in-form Kieran Agard as he lined up a volley from inside the D.

The Dons earned themselves a free-kick shortly after that chance following a foul on Conor McGrandles. Upson took it and his low effort produced a diving save out of Ian Lawlor in the Rovers goal.

Two minutes later, Lawlor came up with another diving stop to deny Aneke and that was followed by efforts from Pawlett and Gilbey, both of which were blocked. The latter then saw a right-footed strike clip the crossbar with Lawlor beaten.

It was all Dons in the opening 15 minutes, with the only effort on goal from Doncaster coming from the right boot of Niall Mason - his low effort was saved by Nicholls.

On 23 minutes, after some more good football in the Rovers half, Scott Golbourne went agonisingly close to registering his first Dons goal with a first-time strike which cannoned off the inside of the right post.

Aneke then had the ball in the net from Pawlett’s cross on 25 minutes but was denied by the assistant referee’s flag. Williams’ low cross was met by Pawlett whose effort was saved. He tried his best to keep the ball in play to set up Aneke but wasn’t able to in the eyes of the lineswoman.

The men from MK1 continued their dominance and Upson sent a long-range effort over the bar on 32 minutes - an ambitious strike but one which epitomised the confidence with which the Dons were displaying in their performance.

With five minutes remaining in the first half, the Dons saw a decent appeal for a penalty waved away by the referee. From Upson’s free-kick, Chuks Aneke was dragged down at the far post - a foul which was given against the Dons against Southend in midweek but not awarded in their favour on this occasion.

At the start of the second half, Doncaster had a free-kick of their own which Ben Whiteman took. The Rovers man beat the wall but couldn’t find a way past Nicholls in the Dons goal.

Ebanks-Landell then got in the way of a fierce strike from John Marquis as the hosts began to test the Dons’ resistance for the first time all afternoon. From the resulting corner, Marquis made Rovers’ second-half dominance count, heading home after the Dons failed to clear the initial delivery in from the right. 1-1.

Aneke blazed a left-footed shot wide three minutes later as the Dons went in search of restoring their lead before Whiteman forced a save out of Nicholls from the edge of the D in the 63rd minute.

Agard, who came into the game with three goals in his last two outings, found himself with a great chance to extend that scoring un on 67 minutes but his header from McGrandles’ cross was brilliantly saved by Lawlor.

The Dons looked like they had rode the storm from their hosts but with 20 minutes to play they found themselves chasing an equaliser rather than a winner after substitute Matt Blair broke through the defence and slotted past Nicholls. 1-2.

Neilson’s men had quarter of an hour to rescue something from the contest so Ryan Seager, Brandon Thomas-Asante and Aidan Nesbitt were all introduced in hopes of inspiring a comeback.

In the 75th minute, Pawlett forced a save out Lawlor with a low drive before substitute Seager did brilliantly to deny James Coppinger at the other end of the field.

Williams headed over a Golbourne corner with seven minutes to play, with Nesbitt also going close in regulation time.

The Dons then threw men forward in stoppage time but weren’t able to fashion a goalscoring chance before the final whistle brought an end to a disappointing afternoon. 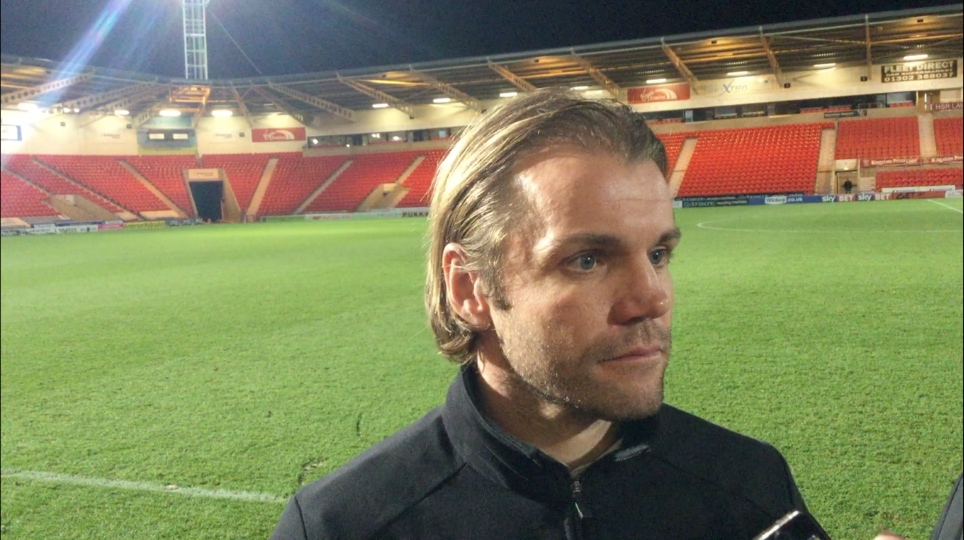 
MK Dons will be looking to stretch their unbeaten run to six games when they take on Doncaster Rovers at the Keepmoat Stadium on Saturday afternoon.