Despite a strong start to the month, the Dons were unable to stop their descent down the Sky Bet League One table and that led to the departure of manager Karl Robinson after more than six years in charge.

The men from MK1 took just four points from six games, losing twice more on their own patch to extend their winless run at Stadium MK to eight league fixtures.

They did, however, secure their place in the knockout round of the Checkatrade Trophy courtesy of a 1-0 victory away at rivals Peterborough United – one of only two victories in October.

87 – Minutes on the clock when Bristol Rovers began their dramatic comeback, scoring twice in the closing stages to earn a 3-3 draw at Stadium MK.

Robinson’s men enjoyed their fourth away league win of the season, as well as a deserved clean sheet.

Kieran Agard’s goal five minutes before the break proved to be the difference as Karl Robinson’s men deservedly came out on top at the ABAX Stadium.

The triumph, which would have been more comfortable had second-half chances been taken, moved the men from MK1 on to five points from two outings in Group F after a penalty shoot-out success on day one over Barnet.

MK Dons 0-1 Port Vale – Sky Bet League One (Sunday 9th)
MK Dons were unable to turn possession into points as they fell to a 1-0 defeat against Port Vale at Stadium MK.

Karl Robinson’s controlled the game from start to finish and went close on a number of occasions, including hitting the woodwork twice, but they couldn’t make their dominance count in front of goal.

The only goal came in the first half when Alex Jones scored at the second attempt after his penalty had been saved by David Martin.

Kieran Agard scored his fifth goal of the campaign to cap a strong spell of pressure and send the men from MK1 1-0 ahead at the break.

However, the hosts hit back in the second half and won it courtesy of a brace from substitute Paddy Madden.

Goals from Dean Bowditch and GB Williams, his first for the Club, had the Dons 2-0 up and in control at the break.

A superb solo effort from Ben Reeves restored the Dons’ two-goal lead after Matty Taylor had pulled one back, only for Rovers’ No.10 to strike twice and complete his hat-trick in the final five minutes to secure a share of the spoils.

Goals from Simon Cox and Anthony Wordsworth had the visitors 2-0 up midway through the first half and, despite going close on a number of occasions, the men from MK1 were unable to overturn the deficit. Wordsworth added a third in injury-time from a free-kick.

Darren Potter cancelled out Stefan Scougall’s sixth-minute strike with a smart finish in the opening minutes of the second half, but Billy Sharp won it for the fourth-placed Blades just after the hour mark.


Twelve years on from that memorable day at Wembley Stadium, Dean Lewington still views MK Dons’ Johnstone’s Paint Trophy success as one of the biggest moments in the Club’s history. 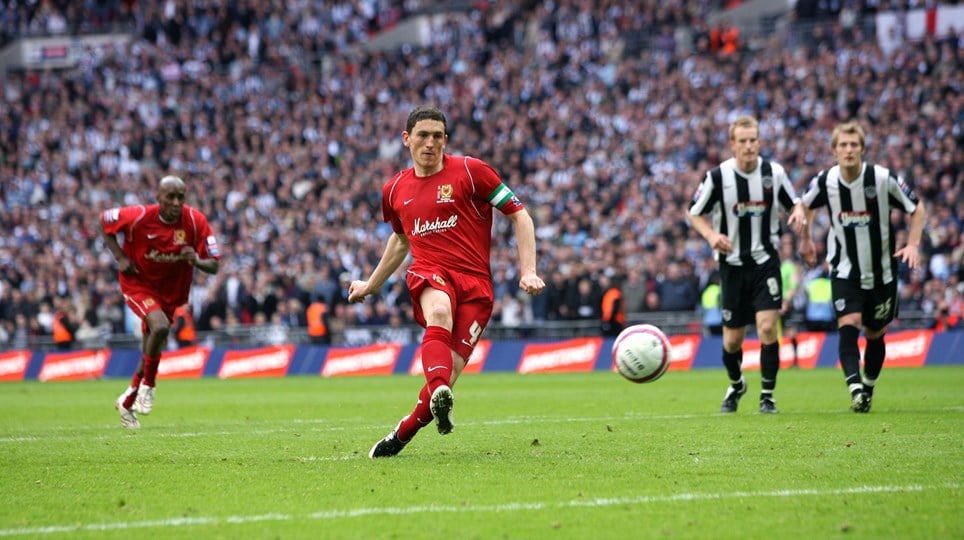 On this day: 12 years on from Wembley Trophy triumph

Gallery: Dons' day out at Wembley On this day: Russ wins it late against Rovers