The Dons ended the campaign on a positive note, picking up four wins from seven games to secure a top-half finish in Sky Bet League One.

The final day success over Walsall – a terrific 4-1 triumph – was arguably the standout success in April, although the wins away at Southend United and Charlton Athletic were also memorable, as was the five-goal thriller at home to Gillingham which included a last-minute winner from captain Dean Lewington.

There were low points – home defeats to play-off semi-finalists Scunthorpe United and champions Sheffield United as well as frustrating draw away at Swindon Town – but that did little to dampen the positivity gained that 2017/18 should bring better and greater things.

APRIL IN NUMBERS
91 Minutes on the clock when Dean Lewington headed in a dramatic winner in the 3-2 thriller with Gillingham.

2 Robbie Muirhead’s first two goals for the Dons came in the month of April, including a stunning strike against Gillingham.

5 Combined total of goals scored by loanees Harvey Barnes (3) and Stuart O’Keefe (2) during April – the pair both found the net in the wins over Charlton Athletic and Walsall.

9 Second-half minutes it took the men from MK1 to build up their two-goal unassailable lead away at Southend United.

14 Goal tally achieved by Kieran Agard courtesy of his cooly-taken penalty in the 1-1 draw with Swindon Town.

Goals from Robbie Muirhead and Harvey Barnes had the men from MK1 in the driving seat after 10 minutes but the Gills hit back through Cody McDonald and Josh Wright, who levelled in the final minute of normal time.

However, the skipper headed home in stoppage-time to earn Robbie Neilson’s side an important three points, which moves them eight points clear of the bottom four and only one win from the top half.

Goals in either half from Stuart O’Keefe and Harvey Barnes proved the difference but, in truth, it could have been more as they controlled proceedings from start to finish.

Paul Downing replaced the suspended George Williams while Darren Potter also returned in place of Kieran Agard, who started on the substitutes’ bench.

Kieran Agard's first-half penalty had the Dons in the driving seat but they were unable to convert a number of other chances, which would have put the game to bed.

They were then made to rue those missed opportunities, as in the 90th minute Obika pounced on a defensive mistake and slotted past Nicholls, forcing Robbie Neilson's men to settle for a point.

Ivan Toney’s first-half header won it for the visitors, who offered little else going forward but stood firm in defence to deny the men from MK1.

The Blades were clinical in their finishing – Leon Clarke and Billy Sharp (2) on the scoresheet – and that was the difference between the two sides at Stadium MK.

Excellent strikes from Robbie Muirhead and Ben Reeves had the men from MK1 2-0 up and in control at the break.

Stuart O’Keefe turned home a Ben Tilney strike with 20 minutes remaining and Harvey Barnes put the icing on the cake late on either side of a consolation through Erhun Oztumer.

Gallery: Ben Gladwin as a Don 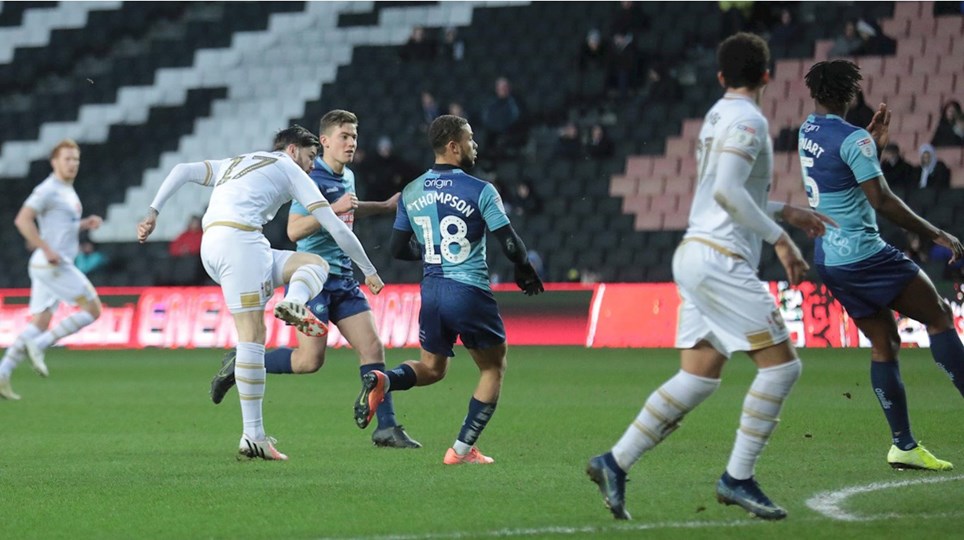 Gallery: Healey as a Don