Ethan Ebanks-Landell and Peter Pawlett made their Dons debuts in the friendly with Budaorsi SC on Saturday afternoon.

The new signings played 65 minutes in another competitive workout at the Club’s training base in Hungary.

Joe Walsh and Robbie Muirhead were on target in the 4-2 reverse, but the most important thing for Robbie Neilson would have been seeing many of his side get more minutes under their belts.

Budaorsi SC asked some early questions of Lee Nicholls and the Dons’ defence but they were up to the task.

The windy conditions were making it difficult for the Dons to play their football but they still created chances for Paul Downing and Muirhead, who headed and fired wide respectively.

At the other end, Nicholls made a couple of routine saves as the Hungarian second division side reminded the Dons of their threat.

However, the Dons took the lead five minutes before the break when Walsh turned home from inside the six-yard box after the men from MK1 had kept the corner alive.

Budaorsi levelled matters courtesy of a close-range header, meaning the two sides went in 1-1 at the break.

There were chances at either end at the start of the second period – the Dons one falling to Muirhead, who saw a low drive blocked.

Pawlett then turned Muirhead’s cross over the top before Rasulo fired off target, however, the Dons were caught on the hour mark. Substitute Wieger Sietsma got a hand to the penalty but couldn’t keep it out after the opposition’s No.9 had drawn a foul – it’s fair to say there was a little bit of suspicion about it.

Shortly afterwards, Budaorsi SC extended their lead courtesy of a close-range finish at the back post.

The Dons showed spirit and hit back almost immediately, Muirhead firing a well-placed free-kick past the Budaorsi keeper from 20 yards.

Downing headed wide as the Dons threatened a leveller but they found themselves 4-2 down not longer after when the net was found from 12 yards.

The men from MK1 kept going and substitute Jay Bird saw a shot blocked following some smart play by Muirhead down the right.

Bird continued to threaten, as did fellow substitute Sam Nombe, but the Dons were unable to reduce the deficit.

The key point of pre-season is fitness levels, though, and they continue to rise with the season three weeks away. 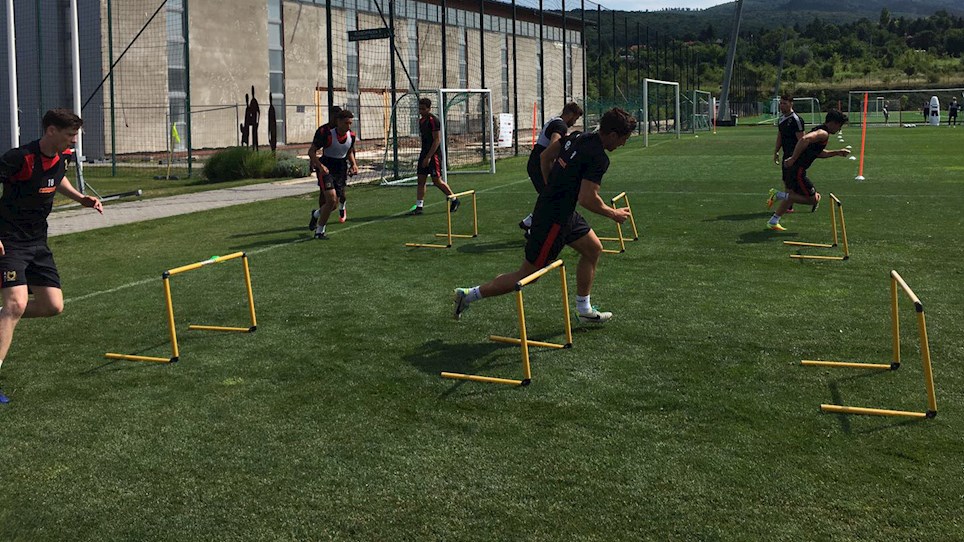 
The hard-work continues for MK Dons at their pre-season training base in Hungary.