Last week was a memorable one for Sam Nombe, who made both his senior debut and his league bow in the space of five days.

The striker, who signed his first professional contract with MK Dons in the off-season, was a second-half substitute in the Carabao Cup victory over Forest Green Rovers and followed that up with an appearance off the bench in the recent Sky Bet League One clash at Blackpool.

“I was happy to come on and make my first league appearance, after making my debut on Tuesday,” Nombe told iFollow MK Dons in the aftermath of the weekend fixture at Bloomfield Road. “It’s always a great experience to play for the first team.

“It’s a great experience being involved in the first team. You learn so much from the players and the staff – they really help you.

“I’m always trying to reflect that in my game and use their advice and experience to better me as a player. That gives me the best opportunity to impress on the field.”

Nombe impressed in both the matches, providing Robbie Neilson, his team-mates and the Dons supporters with a glimpse of his potential but the 18-year-old is just focused on helping the side pick up points.

“I’m just trying to help the team when I’m on the pitch – be a strong player who can hold up the ball but also get behind.”

The powerful forward went close to getting on the scoresheet at Blackpool on Saturday, heading over from a Kieran Agard cross soon after his introduction before coming close to connecting with another ball in from the striker late on.

His impressive cameo, however, wasn’t enough to help the team avoid a 1-0 defeat by the seaside – a disappointing result according to Nombe.

“I felt we could have scored a few goals and nicked the game but we move on to next Saturday now. Its part of football – you have to learn from it and we’ll now try to get all three points against Gillingham.”

While the result at Blackpool was far from ideal, there were no complaints about the support from the stands, with over 560 Dons supporters in attendance at Bloomfield Road and in fine voice too.

Nombe echoed those sentiments, saying: “It’s always fantastic to hear the fans and for them to come all this way to support us.

“Hopefully we can provide more for them in the future and they can continue to push us. 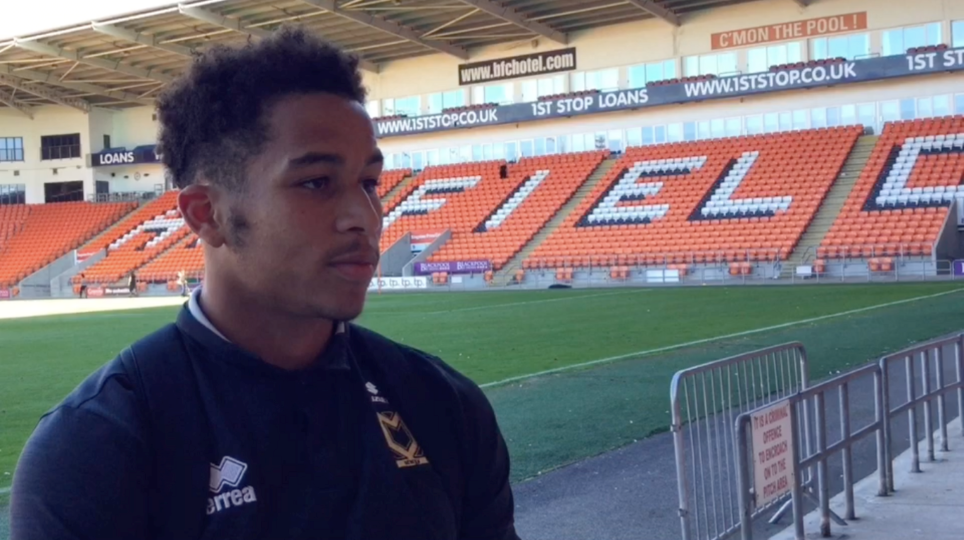