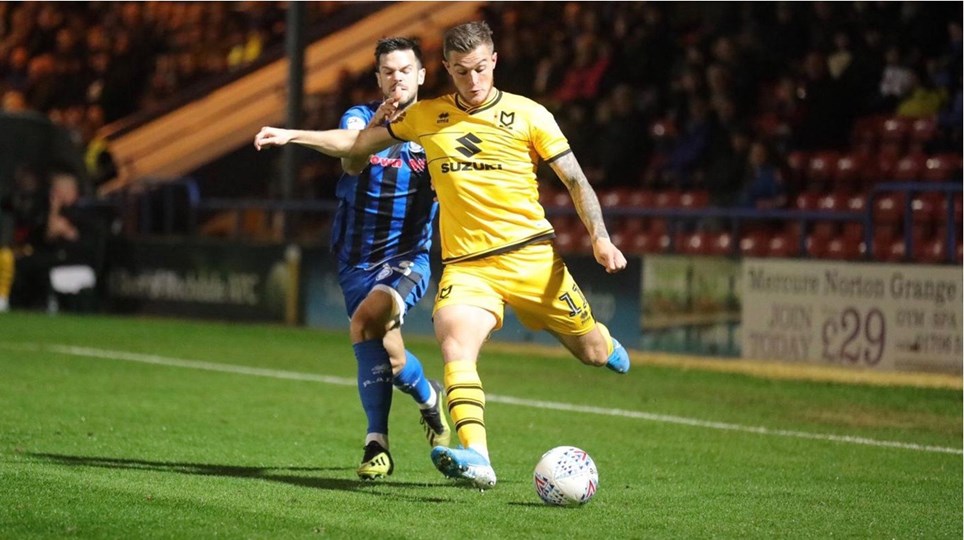 Sam Nombe was on target for MK Dons Under-23s in their Central League Cup victory over Southend United, while Rhys Healey made his return to match action after three months sidelined.

Nombe, making his third appearance since recovering from a knee injury, struck after just nine minutes while Brennan Dickenson netted a second-half brace to secure the Dons' first Central League win of the campaign.

MK Dons named a strong Under-23 side for their Central League Cup clash with Southend United – with Rhys Healey earning his first minutes since September 7th.

There was minutes for suspended duo George Williams and Baily Cargill, who were partnered in defence by Matthew Sorinola and Finn Brennan.

Elsewhere, Stuart Moore, Jordan Bowery, Brennan Dickenson and David Kasumu all started with Under-18 John Freeman also involved from the off.

The first chance of the game fell the way of MK Dons just three minutes into the encounter when Sorinola’s low cross towards Nombe caused the Southend back line trouble.

Healey had his first sight of goal with six minutes on the clock. He was found by Brennan’s whipped cross before he headed narrowly over the bar.

The Dons dominance in possession soon turned into a goal as Sam Nombe pounced on a loose pass before coolly finishing past Callum Taylor on the 10-minute mark. 1-0.

The goal kicked Southend into action O’Shane Stewart dragged wide from the edge of the box.

Soon after, Harry Phillips was denied by Cargill’s block, before Matt Rush fired wide from range.

The Dons almost had their second but were denied by a superb save by Callum Taylor. Dickenson's low cross fell to John Freeman but his low effort was saved.

Sam Nombe then found himself with space out on the right, his low cross was met by Jordan Bowery, who stabs just wide.

David Kasumu then tried his luck from range, he was unable to find a way past Taylor.

Healey was looking bright upon his return to action, he fired narrowly wide from the edge of the box after rolling his defender.

The final chance of the half fell the way of Bowery who headed narrowly over from Dickenson's cross.

Both Sam Nombe and Rhys Healey were replaced at half-time, with Dylan Asonganyi and Jamie Robinson replacing the duo.

It was Southend who started the second-half the brighter, Terrell Egbri and Eren Kinali both were denied by Stuart Moore.

With 55-minutes on the clock, the Dons doubled their lead through Brennan Dickenson. He played a one-two with Asonganyi before firing into the back of the net on his right food 2-0.

Dickenson was causing trouble to the Southen defence, having beat his man out wide, his cross just missed the run of Asonganyi.

Moore was forced into strong save at his near post with 75-minutes on the clock. The Dons keeper showed good reactions to deny Charlie Kelman.

Dickenson put the game to bed shortly after as the forward netted his second goal of the afternoon. It started with Dylan Asonganyi's flick into Freeman, the midfielder then found Dickenson who curled past Taylor and into the back of the net. 3-0.

Southend did pull one back with the game drawing to a close but left it too late to mount a comeback. 3-1