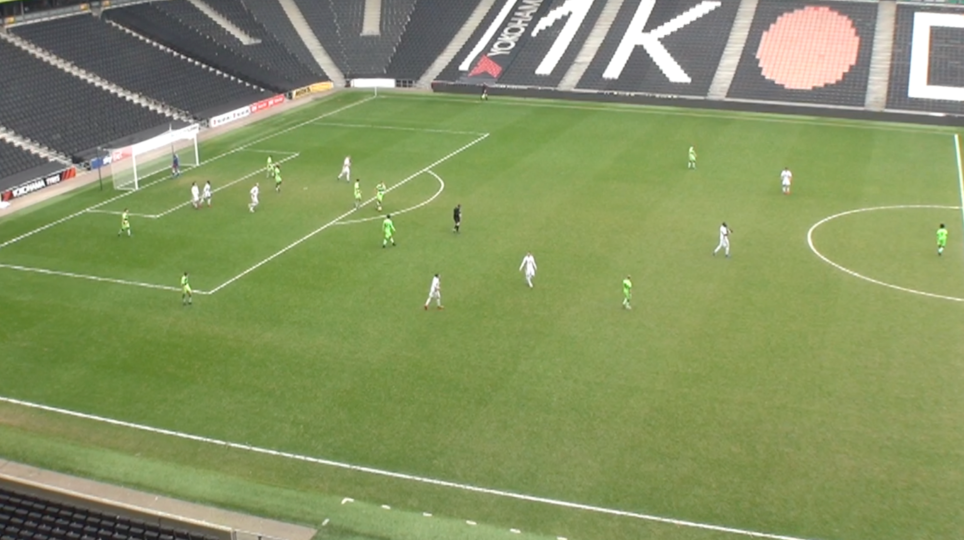 MK Dons Under-23s were back in Central League South action on Monday afternoon and ran out 5-1 winners against their Forest Green Rovers counterparts.

The game was put to bed in the first half, with Simpson opening the scoring early on - before Asonganyi's 16-minute hat-trick put the result to bed before half-time.

Simpson put the game beyond doubt in the second half, before Sam Hendy scored a late consaltion for the visitors.

The Dons team featured a number of players who were after minutes. Starting between the sticks for the Dons was Stuart Moore, with the four in front of him consisting of David Kasumu, Oran Jackson, Finn Tapp and Matthew Sorinola.

It was the perfect start for MK Dons as Robbie Simpson put his side ahead just three minutes into the game. Lawson D’Ath found himself with time and space on the left wing and played a perfectly weighted through ball into the path of Matthew Sorinola, his cross picked out Simpson inside the box who diverted first time past Lewis Thomas. 1-0.

Jordan Simpson almost drew Forest Green level seconds after the goal, having picked up the ball on the edge of the penalty area, his curling strike cannoned off the crossbar.

It fell kindly for the Forest Green midfielder, but his shot on goal was blocked by Jackson.

Having weathered the pressured from Forest Green, Edu Rubio’s side doubled their advantage with 10-minutes on the clock. Ousseynou Cisse picked up the ball on the halfway line and played a ball over the top for Simpson. Having controlled on his chest, Simpson chipped over the advancing Thomas, only for his goal to be taken away from him by Dylan Asonganyi who tapped home from two-yards out. 2-0.

Both Simpson and Asonganyi came close to making it three, neither were able to trouble Thomas.

Sorinola and Simpson almost combined for a goal for the second time in the afternoon, with the latter forcing a great save from Thomas after being picked out by Sorinola's cross.

The Dons did find their find with 23-minutes on the clock, Simpson picked out Kasumu on the right, with his pinpoint cross landing on the head of Asonganyi who powered home for his second of the game. 3-0.

Asonganyi had his third of the afternoon three minutes later and it came as a result of his own hard work. The striker pressured Thomas into a mistake and tapped home into a vacated net. 4-0.

D'Ath came close to making it five, he was unable to direct his header past Thomas, with it ended inches wide of the post. Shortly after, Harley saw his dipping volley end narrowly over the bar.

Isaac Pearce went close for the visitors - he was denied by a strong Moore save down to his right.

The Dons thought they had their fifth of the afternoon through Simpson, only for the offside flag to be raised against the striker. The chance came about after some wonderful work on the edge of the box from Asonganyi, however, the Forest Green defence held their line well to catch Simpson offside.

Jay Malshanskyj had the chance to reduce the deficit on the stroke of half-time - he was unable to turn home from six-yards out.

MK Dons had the chance to increase their advantage second after the break. Robbie Simpson was judged to have fouled his marker before heading down for Dylan Asonganyi in the area.

Simpson would be rewarded for his hard-working performance as he found the net for the second time. Watson played a delightful ball around the Rovers backline and Simpson latches onto it, before rounding the goalkeeper and converting into the empty net. 5-0.

Despite not having much to do, Stuart Moore produced an excellent save on the hour mark to deny Jordan Simpson. Simpson just had Moore to beat but the goalkeeper stood firm and got a strong right hand to his shot.

Sorinola then went close to making it six after a lovely passing move from the Dons. Harley plays it inside to Watson, who waits for the run of  Sorinola before finding him - his left-footed shot was blocked.

Watson once again came close to getting on the scoresheet, he was found by Harley on the edge of the area, but his shot on goal was blocked.

Jay Bird was looking to make an impact off the bench, but could only drag his effort from the edge of the box wide of the post.

Both Nombe and Watson went close - but were unable to find a way past substitute keeper Dec Lahmann.

Forest Green grabbed a late consalation goal, with Sam Hendy heading home from a corner with seconds remaining in the game. 5-1.