The Dons enter the local competition at the Second Round stage, after receiving a bye in round one.

The winner of tonight’s tie – the first between the two clubs – will face Windsor in the Quarter-Final – the Hellenic League Premier Division outfit beat Newport Pagnell Town 2-0 in their Second Round clash back in October.

Just three victories would see the men from MK1 progress through to the Final – a feat the Club hasn’t achieved since 2007 when they lifted the Cup.

The Yellamen have endured a difficult start to the campaign, currently sitting 19th in the table after taking just 11 points from their opening 19 fixtures.

However, they go into this evening’s match on the back of an impressive performance against Tuffley Rovers at the weekend – despite being reduced to 10 men in the first half, the Berkshire club led their mid-table opponents 1-0 until the late stages of the contest when Tuffley struck to earn a share of the spoils.

The Dons received a bye in the First Round so tonight’s tie will be their opening match of this season’s competition.

In 2016/17, the Dons reached the Second Round stage courtesy of a 4-1 victory over Chalfont St Peter before exiting the competition courtesy of a 3-0 loss at Slough Town.

Ascot also received a bye through to the Second Round. This is the Yellamen’s first season in the competition.

Tonight’s Dons side, managed by Edu Rubio, is expected to be made up of young professionals and Under-18s players.

The likes of Sam Nombe, Giorgio Rasulo and Oran Jackson should all feature as will scholars such as David Kasumu, Finn Tapp Dylan Asonganyi and Jay Bird – all of whom have first-team experience under their belts.

Entry to this evening’s tie is priced at £6 adults and £4 concessions while under-16s go FREE. Entry can be paid for on the gate ahead of kick-off.

Can’t make the game? You can follow all the action via the Match Centre – click HERE from 6.45pm. 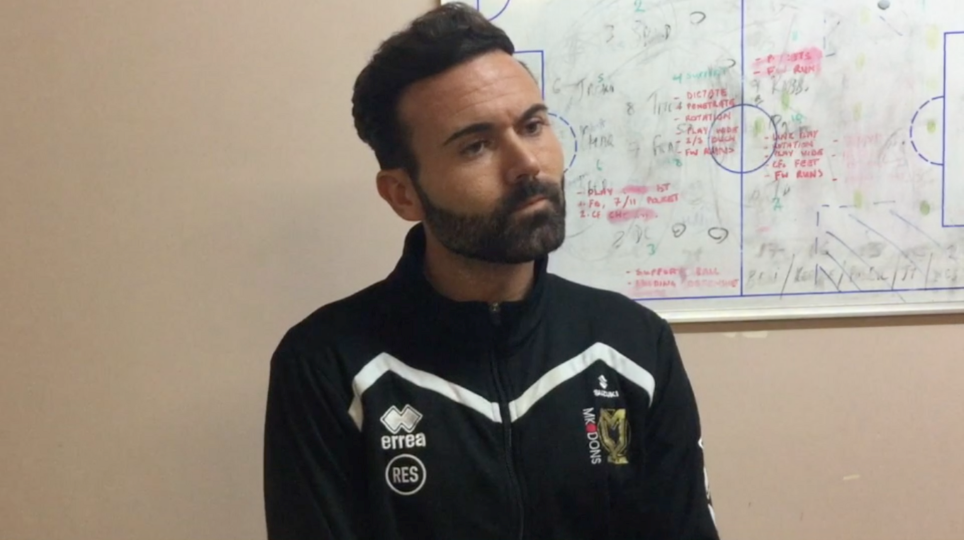 A brace from Brandon Thomas-Asante saw a youthful MK Dons side progress through to the Quarter Finals of the Berks and Bucks FA County Senior Cup.

Thomas-Asante struck either side of half-time to see the Dons past Ascot United and set up a tie with Windsor in the last eight of the competition.

Edu Rubio’s side included six professionals, including goalkeeper Wieger Sietsma and forward Thomas-Asante, the latter playing just 24 hours after featuring off the bench for the first team against Southend United.

The Dons started confidently, dominating the opening exchanges, but it was their opponents who threatened goal first.

Ascot captain Louis Bowers had the ball in the net for his side on 10 minutes - however, the linesman on the far side of the field had his flag already raised for offside to deny the defender an early opener.

Ben Harris then produced a save out of Sietsma with an audacious free-kick from distance before the Dons made their dominance in terms of possession count in the 18th minute.

Thomas-Asante raced clear from a lofted through pass and confidently sent a left-footed drive under the Ascot goalkeeper to put his team in front. 0-1.

The exciting young winger went close to doubling his and the Dons’ lead just before the half-hour mark but after a terrific run down the left, his right-footed strike was blocked.

Bradley Bell sent a left-footed strike just past the post with 10 minutes to play in the half with Rasulo also going close before the break - the 20-year-old firing over from inside the area.

It was Rasulo who had the first chance of the second half but he couldn’t beat Lee Allen when one-on-one. Thomas-Asante then came within a whisker of a second goal, lifting a lob over Allen but onto the roof of the net.

Sietsma had a relatively quiet first half but the Dutch goalkeeper had to be at his best to keep out Sami Regragui’s 50th-minute free-kick, which looked destined for the top right-hand corner.

Regragui tried his luck again from another free-kick soon after but the winger sent this effort over the crossbar.

On 55 minutes, Logan raced through on goal but his shot was kept out by Allen. The midfielder then turned provider for Thomas-Asante, whose effort hit the inside of the right post and then rebounded into the goalkeeper’s arms.

Thomas-Asante was having a superb evening and he deservedly grabbed a second goal on 65 minutes, racing onto Logan’s through pass before rounding the goalkeeper and then finding the net to double the Dons’ lead. 0-2.

There was very little in the way of action following Thomas-Asante’s second although the forward did go close to a hat-trick with a late effort which was ruled out for offside.