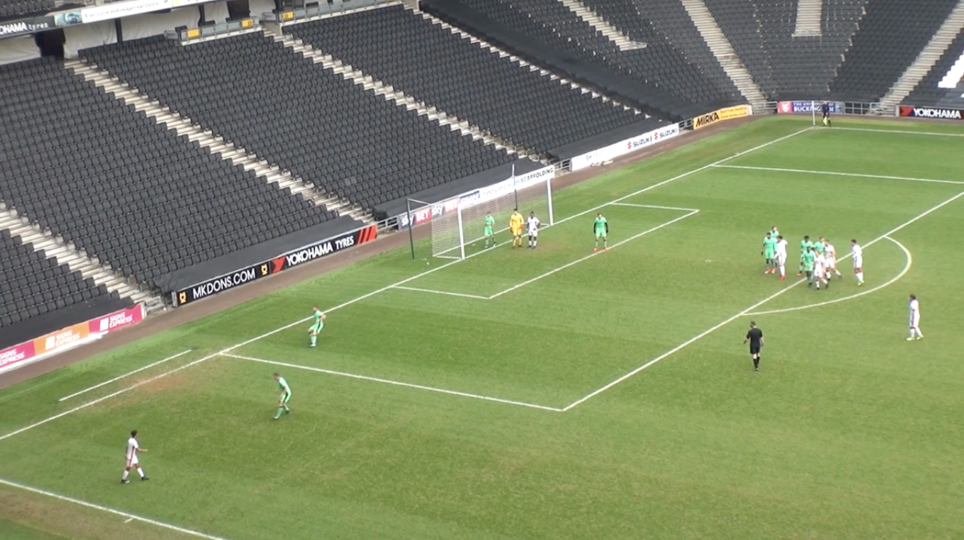 Brandon Thomas-Asante opened the scoring as he converted Hugo Logan's corner before the forward added his second of the game before the 10-minute mark. Hugo Logan was also on the scoresheet during a frantic first-half as the midfielder converted from 25-yards.

Not to be outdone, Colchester soon found their way back into the game as the half drew to a close. Both Tariq Issa and Callum Sturgess found the back of the net to set up a nervy final 10 minutes for MK Dons.

The nerves were settled just two minutes before the break as Liam Sole scored a wonderful individual goal to restore the advantage.

Colchester once again clawed their way back into the game via Will Wright, however, there was yet more joy for Thomas-Asante who completed his hat-trick just 10 minutes into the second-half.

Despite a two-goal deficit - Colchester continued to attack and soon reaped the rewards. Both Noah Chilvers and Eoin McKeown added their name to the scoresheet to level the scoring at 5-5.

Edu Rubio's side eventually saw off their opposition thanks to goals from Finn Tapp and Giorgio Rasulo to cap off an entertaining game of football.

After a scrappy opening few minutes where both sides were adapting to the Stadium MK surface it was Liam Sole who had the first chance of the game. The winger collected the ball from Joe Evans before his curling right-footed effort was turned behind by Jake Hallett.

From the resulting corner, Hugo Logan picked out Thomas-Asante who headed home from six-yards out giving the Dons the lead just three minutes into the tie. 1-0.

With 10 minutes on the clock, Thomas-Asante had his second of the game. Sam Nombe saw his initial shot saved by Hallett, however, Thomas-Asante was on hand to convert from six yards. 2-0.

It took until 19 minutes for Colchester to trouble Alfie Jones. Noah Chilvers collected the ball 30-yards from goal and after he evaded Charlie Pattison’s challenge the U’s number 8 flashed his shot narrowly wide.

It was almost three for Rubio’s side as Sole picked out Logan who was unmarked on the right. His driven cross was intercepted by Dan Jefferies who turned behind at the feet of Thomas-Asante.

The Dons didn’t have to wait long however for their third of the game. Giorgio Rasulo’s short corner found Logan who was unmarked 25-yards from goal. After one touch to set himself the 19-year-old cleverly lofted his shot over Hallett and into the back of the net. 3-0.

The frantic nature of the game continued and with 30 minutes on the clock, Colchester were back in the game. Elijah Phipps had his driven cross saved by Jones, however, Tariq Issa converted on the rebound. 3-1.

The goal was the catalyst for a small period of domination for Colchester as two minutes later Callum Sturgess was on hand to head home after Kanye Diedrich-Roberts’ cross. 3-2.

The game saw its fourth goal just two minutes from the break. Sole’s dazzling footwork created him an inch of space before he found the far corner giving Dons a 4-2 lead at the break.

It was Colchester who started the second-half brightest and found their way back into the game on 50 minutes. Chilvers collected the ball inside his own half and his surging run pushed Wayne Brown's side forward. The midfielder eventually found Diedrick-Roberts whose cross found Will Wright unmarked, the defender calmly tucked his shot under Jones. 4-3 .

With the visitors in control, it was Thomas-Asante who found the next goal of the game and subsequently score his hat-trick. On 55-minutes the forward hassled the Colchester defence into a mistake before rounding the keeper and smashing home for his third of the game. 5-3.

After his standout performance for Colchester in midfield, Chilvers' performance was eventually rewarded with a goal as his driven shot beat Jones and gave Colchester life. 5-4.

Having been behind for the majority of the game, Colchester eventually drew level with 15 minutes to go. Eoin McKeown's powerful run finished with his left-footed strike finding the top corner of Jones' net. 5-5.

Almost immediately, Dons were back in the game as Finn Tapp collected Joe Evans pass before he beat two Colchester defenders to convert from 10-yards. 6-5.

And just two minutes before the final whistle there was time for Rasulo to add his name to the scoresheet and complete the 7-5 win for the Dons.

Speaking to mkdons.com following the full-time whistle, Rubio said, "It was a very good learning opportunity for the lads today and it was really pleasing that all of them stuck to our values and the way we play.

"We played attacking football and tried different things, I think if anything these type of games will help those on the brin of the first-team to actually understand the good and the bad. That'll help them because when they get to the first-team they'll be able to manage the game in a more professional way.

"I'd obviously like to congratulate Brandon for his hat-trick but I think Joe Evans, Liam Sole and Finn Tapp were exceptional too - these games enhance the ability to believe in our DNA.

"It was a pity this game was behind closed doors because I would've paid good money to watch our exciting, daring football."