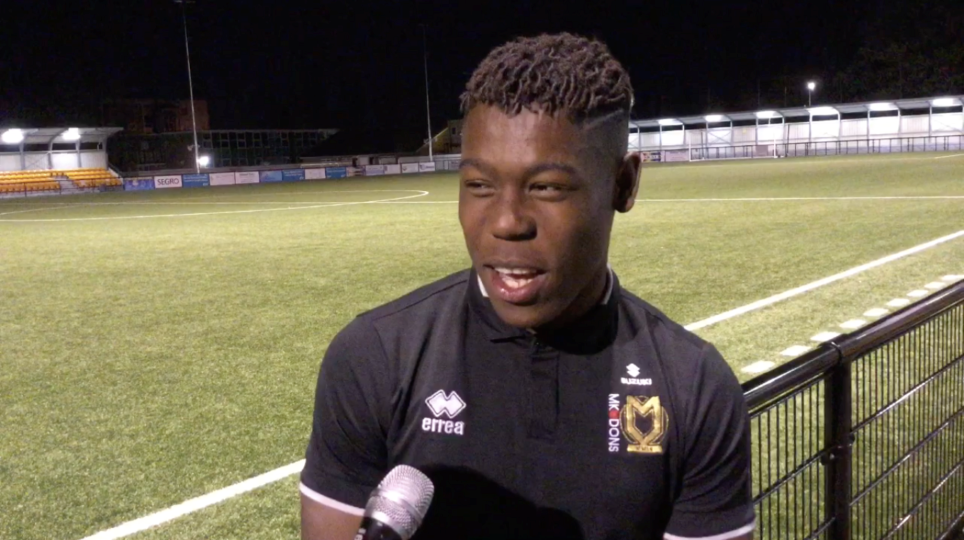 MK Dons secured their place in the Berks and Bucks FA County Senior Cup Final courtesy of a 4-1 victory over Slough Town at Arbour Park.

All four of the Dons’ goals were scored in the first half, including Brandon Thomas-Asante’s half an hour hat-trick. Giorgio Rasulo scored their fourth and final goal prior to the interval.

Edu Rubio’s side included a mix of first-team players and apprentices, with Aidan Nesbitt, Conor McGrandles and Thomas-Asante among the senior pros named in the starting XI - Thomas-Asante scored a hat-trick in the Quarter-Final victory over Windsor while Nesbitt was also on the scoresheet that afternoon.

Slough started well and produced a save out of Alfie Jones just 40 seconds in - the first-year scholar was alert to Chris Flood’s diving header and managed to palm it round the post. There was then an opportunity for James Dobson minutes later but he fired over from inside the area.

The Dons were looking to release Thomas-Asante as often as possible but the through balls coming from midfield were unable to provide the forward with a chance to threaten the host’s goal.

That was until the 16th minute when the young forward got behind the Slough backline from a long pass forward and confidently fired past goalkeeper Jack Turner - the Dons’ first shot on target resulting in the opening goal. 0-1.

Jones kept the Dons’ lead in tact midway through the first-half with a save from Dobson’s dipping volley.

Thomas-Asante then doubled his and the Dons’ tally, pouncing on a loose touch from centre-back Mark Nisbet before showing great composure to round the goalkeeper and poke into the empty net. 0-2.

The talented youngster then made it a half-hour hat-trick as he slid in to convert from Rasulo’s inch-perfect cross on 30 minutes. 0-3.

Thomas-Asante almost scored a fourth two minutes later but his deflected effort was saved by Jack Turner. The Dons, though, did add to the scoresheet shorty after, with Rasulo sending a delightful outside-of-the-boot effort into the far corner after a one-two inside the box. 0-4.

It could have been five before the break but McGrandles, after beating his man and regaining his balance from the resulting trip, curled wide of the right upright. Slough also had an opportunity prior to the half-time whistle to reduce the deficit but Harrison Gilkes couldn’t convert from a Dobson delivery.

Thomas-Asante had the first shot of the second half as we went in search of his fourth goal. The 19-year-old drove across the box, looking to create room for a shot, before eventually producing a save out of Turner with a right-footed drill.

Nesbitt later chested over the bar from a McGrandles cross moments before Slough reduced the deficit courtesy of a goal from Perry Coles. 1-4.

The Dons should have restored their four-goal advantage almost immediately but, after wriggling away from his marker, Connor Furlong couldn’t keep his left-footed effort down. Substitute Jay Bird, on for Thomas-Asante, was well-placed for a tap in had Furlong chose to go for the assist.

From a later corner, McGrandles saw a fierce strike saved by Turner while Bird, too, forced a save out of the Slough stopper after beating the offside trap and racing into the area.

Rubio’s men were certainly intent on adding to their goal tally, and both Oran Jackson and Furlong attempted to do just that.

At the other end, Jackson prevented Coles from troubling Jones with a superb last-ditch tackle while Jones then kept out Warren Harris’ shot from point-blank range.

Despite the host's late rally, the Dons were able to hold onto their 4-1 lead and secure a comfortable passage through to the their first County Cup final since 2007.