Henry Lawrence says MK Dons must use Tuesday’s victory and performance as a way of lifting spirits ahead of the visit of Wycombe Wanderers this weekend. 
Liam Manning felt his side’s display at Walsall was much more akin to what is expected of an MK Dons team. MK Dons bested Walsall 2-0 at the Poundland Bescot Stadium, courtesy of Henry Lawrence and Nathan Holland. This result has allowed Liam Manning's side to progress into the knockout stages of the Papa John's Trophy competition.

Liam manning made nine changes from Saturday's line-up, with only Warren O'Hora and Zak Jules retaining their place.

Callum Tripp found himself among the substitutes - as did goalkeeper David Martin for the first time since the visit to Walsall back in May 2017. Franco Ravizolli was also awarded his first start within the 2022/23 campaign.

First-Half
Burns took a chance early-on, the number 20 picked up the ball in Walsall’s half before he fired an attempt from 20-yards out. The shot was close, but it failed to hit the target.

Liam Bennett claimed the ball on the right-flank, the Saddler’s number 30 then cut inside and lined up a shot which eventually crashed off Zak Jules and away from danger.

Ravizolli was called into action after ten minutes, the keeper made a comfortable save from Hutchinson’s attempt on the edge of the area.

The Dons reacted to the host’s recent attempt with an attack of their own, Dawson Devoy and Conor Grant linked up well, the two midfielders played a one-two pass as Devoy raced into the box. There were calls for a penalty after the midfielder went down, but the referee was firm in his decision and no foul was given.

Henry Lawrence then picked up the ball on the edge of the area, the defender then unleashed a shot that whistled over the bar.

MK Dons winger, Darragh Burns claimed the ball in the middle of the field, the Irishmen saw Evans off his line and attempted to catch out the keeper. Although, the shot-stopper reacted quickly and caught the attempt as he back peddled towards his net.

Walsall saw a spell of possession on the 18-minute mark which awarded the home side with a corner, Andy Williams met with the delivery and turned it over the bar.

Jules threaded a pass through to Dennis, Brandon Comley reacted quickly to the danger and got across the forward before he could meet with the ball. A defensive display which won Walsall a goal-kick.

The match remained goalless within the first 30 minutes of play.

Walsall were granted a corner after Tucker headed Bennett’s cross past the by-line, the Saddler’s played a deep corner-kick that was headed back into a dangerous area. Douglas James-Taylor had a stab at the ball, but Ravizolli was swift in his reaction to prevent the close-range chance.

Liam Bennett found himself amongst the action again, although, the number 30’s shot from the centre of MK Dons’ final-third rose over the goalmouth.

Grant played a ball out wide to Matt Smith, the Welshman used this opportunity to craft a cross toward the penalty spot as he looked for Matt Dennis, but the number 30 failed to connect with the delivery.

A few minutes after Dennis’ chance, Ravizolli had to race out and collect Williams’ heavy touch before the number 11 could amount any further danger. He had received an over-the-top long ball from the Saddler’s backline.

Minutes before the interval, Zak Jules won MK Dons a corner. Devoy played an in-swinging cross, but it didn’t beat the man placed at the front post.

Second-Half
Not long after the restart, Matt Dennis was pick-pocketed in the middle of the field. Although, the striker raced back and recovered well to block Comley’s shot at goal.

The Irish winger picked up a diagonal cross field ball, five minutes into the second-half. However, Emmanuel Month used his strength to guard the ball from Burns and the Saddler’s regained possession.

Walsall took their fifth corner of the match, the ball fell to Hutchinson, who fired a shot into a wall of white shirts. The home side returned to the corner flag a few more times, but Liam Manning’s men continued their strong defensive display and dealt with the multiple set-pieces.

The travelling side were the first to make changes, Louie Barry, Nathan Holland and Joshua Kayode graced the field on minute 57, to replace Darragh Burns, Conor Grant and Matt Dennis respectively.

The Dons crafted a spell of possession after the three substitutions were made. O’Hora played a ball out to Henry Lawrence on the left, the number 22 then cut inside and accelerated past a Walsall defender, which allowed him the space to pick out the bottom-right corner of the net with a curled attempt from the edge of the area. 0-1

The hosts responded with a chance of their own, Cashman found the ball in the Dons’ box, but his low shot was met by Ravizolli.

Holland answered back and used his creativity to blow past three Walsall bodies before the winger fired a cross into the area, the delivery was met by Owen Evans. The Saddler’s keeper then misplaced his distribution, which allowed Joshua Kayode to Knick the ball and charge forward. The number 15 was stopped by a well-timed sliding challenge.

Substitute, Timmy Abraham found his first chance minutes after being on the field. The number 27 met with a corner at the back post, but his headed attempt hit the outside of the net.

Jules’ miskick of the ball gifted Danny Johnson a shooting opportunity, which the forward put wide of the post as the game entered the final ten minutes of play.

Liam Manning’s men regained control after the home side saw a spell of momentum, this allowed Lawrence to try his luck and earn his brace, but the number 22’s curled shot narrowly missed the target.

Ravizolli produced a brilliant save, five minutes before stoppage time to prevent Timmy Abraham’s close-range effort. The linesmen flagged for offside, although the Dons’ keeper was none the wiser before he smothered the strike.

Louie Barry then dropped his shoulder and blazed past Liam Bennett, the number 30 dragged down the winger and received a sanction for the offence. MK Dons were awarded a free-kick for the foul, which deflected behind for a corner, Owens then claimed Dawson’s delivery which followed.

The fourth official signalled for an additional five minutes, after the initial 90-minute period came to a close.

Two minutes into the additional five, Holland drove at Walsall’s defence. The Saddler’s brought down the winger to prevent any further danger and Liam Manning’s men were awarded a free-kick. Ethan Robson, as well as Nathan Holland stood over the ball.

Robson poised to strike, but the midfielder ran over the ball. This allowed Holland to fire a low curled attempt past the wall, which bulged the Saddler’s net. 0-2

This set-piece doubled the lead for Liam Manning’s side in the final stages of the fixture, this also secured MK Dons' place in the knockout rounds of the Papa John’s Trophy competition.


Henry Lawrence says MK Dons must use Tuesday’s victory and performance as a way of lifting spirits ahead of the visit of Wycombe Wanderers this weekend.


Liam Manning felt his side’s display at Walsall was much more akin to what is expected of an MK Dons team. 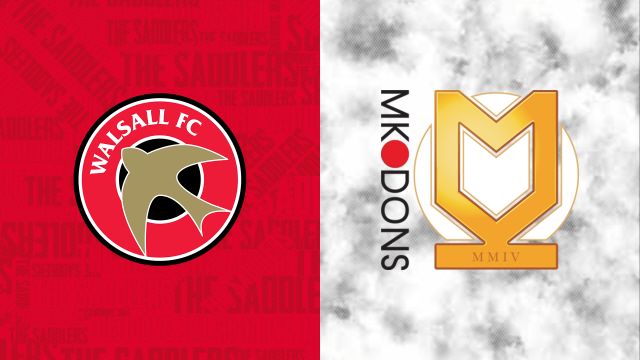 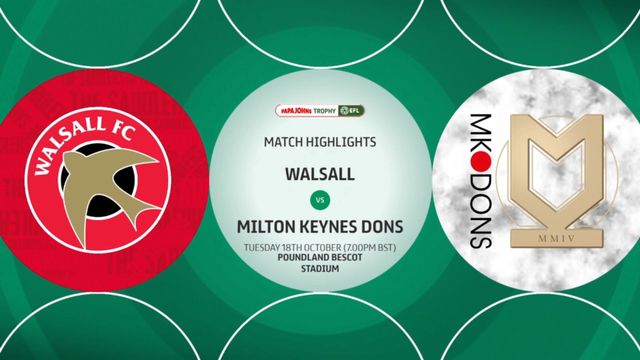 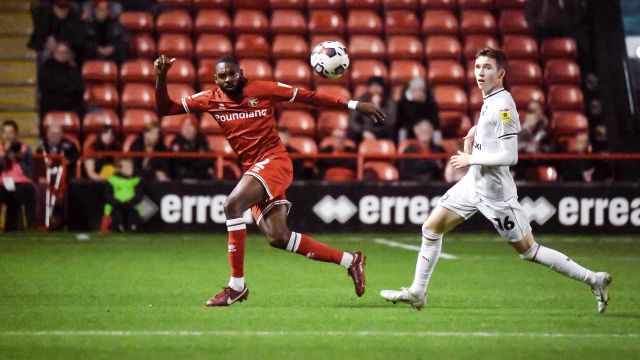