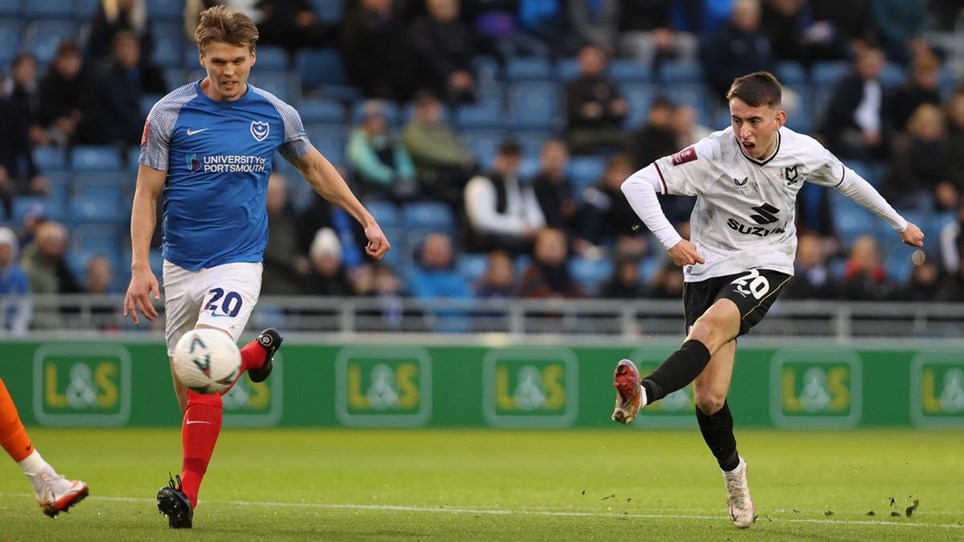 Liam Manning’s men fall out of the Emirates FA Cup competition after a narrow defeat at Fratton Park.

First-Half
The hosts got the game underway and Reeco Hackett was the player to get the first roar from the home crowd. The number 18 played a one-two pass as he surged into the box, but Daniel Harvie was there to clear up any further danger.

On the back of Pompey’s attack, Tennai Watson then carried the ball up the other way, only to be stopped by a sliding challenge from Denver Hume. A corner was given to MK Dons, but ultimately the set-piece only found its way to Griffith’s gloves.

Portsmouth then responded with a corner of their own, Jack Tucker headed the initial danger away. The ball fell to Hume, who recycled the ball towards captain Clark Robertson. His headed attempt from close-range flew over the bar.

Ten minutes after the starting whistle, Mo Eisa hit the floor following contact from a Portsmouth player, who fought for the same ball as he did. The number ten returned to the field shortly after.

Conceding early chances seemed to alert MK Dons to the danger they faced, but they responded with an opportunity of their own, which Darragh Burns converted. Dawson Devoy played a brilliant pass into the path of the number 20, who ran in-behind the home side’s defensive line. Burns remained cool and collected as Griffiths tried to close down the angle, which allowed him to find the back of net 20 minutes into the match. 0-1

McEachran placed himself in the middle of the field, which allowed him to open his body and locate Nathan Holland on the left-flank with a brilliant pass through to the winger, however, Zak Swanson defended well to limit Holland’s opportunity at goal.

Referee Sunny Gill awarded Portsmouth with a penalty ten minutes prior to the interval. A late challenge from McEachran on Jay Mingi caused the offence.

Colby Bishop stood over the spot-kick and the number nine placed the ball into the bottom-left corner, whilst the Dons’ keeper gambled by diving the other way. 2-1

The hosts had the advantage when Sunny Gill announced the conclusion of the first 45 minutes.

Second-Half
MK Dons kicked-off the second half, Liam Manning made one change during the interval, Conor Grant took to the field in place of Josh McEachran.

Minutes after the restart Pompey were awarded another spot-kick. Bishop, who won the penalty, fired the ball down the centre of the goal and found the back of the net once again. 3-1

Liam Manning’s men looked to cut the deficit in order to keep their FA Cup campaign alive. The Dons crafted their first attack of the second half, which was completed by an Eisa strike from inside the D. Griffiths reacted and smothered the shot, 55 minutes into the tie.

The travelling side followed up their first effort of the second half with a pass and move attack in the final-third. Darragh Burns played the ball into Harvie before he burst through Pompey’s defence, Harvie then returned the ball back to Burns on the by-line. The number 20 attempted to cut the ball back to Eisa, but Portsmouth’s defenders reacted quickly to the threat.

Liam Manning’s men were then rewarded for their efforts on the hour-mark. The substitute, Conor Grant, created the chance after he turned his defender and located Holland out wide. The number 11 threaded the ball into Eisa and the striker made no mistake as he found the net from close-range. 3-2

On the 75-minute mark MK Dons had a penalty shout of their own, after Nathan Holland collided with Jay Mingi in the opposition’s area. Both players went down, and no spot-kick was given. The travelling side had been searching for the equalising goal and it seemed they were edging closer to achieving that.

MK Dons continued in their search to level the score line. Conor Grant was the player who came close to finding the net, ten minutes before the end of the game, but Griffiths’ leap across his goal stopped Grant’s shot in its flight.

The Dons continued their pressure in Pompey’s final-third as the game entered the final stages.

Despite their relentless efforts, MK Dons couldn’t find the equaliser they desired. This resulted in Liam Manning’s men narrowly falling out of the FA Cup in the second-round of the competition.