Manning: Use Cup form as fuel


Head Coach Liam Manning wants MK Dons to use their Cup form as fuel for when they return to Sky Bet League One action this weekend. Liam Manning’s men secure their place in the Carabao Cup Round of 16 after a dominant display over Morecambe, which resulted in a 2-0 victory.

Tennai Watson and Mo Eisa both start as MK Dons made eight changes from the weekend. Warren O'Hora, Darragh Burns and Henry Lawrence are the only players who kept their place in the XI.

First-Half
The Dons created a promising chance within the opening minute of the match, Burns’ lofted pass to Grant was later flicked on towards Mo Eisa, though, the Shrimps defence covered the path through.

Tennai Watson, who received his first start since returning from his long-term injury in the previous fixture, came close to opening the scoring. The wing-back burst through Morecambe’s defence before he took his shot at goal, Ripley got a strong hand to the strike and turned it wide.

After Watson’s chance a corner followed, which Jack Tucker nearly converted from. The number four took a stab at the rolling ball in front of him, but his effort pinged off the woodwork.  A promising start for Liam Manning’s men.

On the 18-minute mark MK Dons took the lead through Warren O’Hora. Tennai Watson received the ball on the end of the corner-kick, the number two then rifled a pass into the area. The ball then bounced ahead of O’Hora after Zak Jules headed it across goal, the defender then proceeded to hit a half-volley attempt past Ripley into the right side of the net. 1-0

Darragh Burns then created a gasp throughout the crowd after his long-range effort, moments after the opener, narrowly missed the target.

Morecambe created their first opportunity 24 minutes into the fixture. Jensen Weir delivered a corner, which was dealt with by the home side before Eisa was awarded a foul for being pulled back.

The travelling side found it increasingly difficult to force the action into MK Dons’ final-third. However, the Shrimps had ensured a small period of relief on their backline as Liam Manning’s men controlled the ball.

The home side looked to increase their lead before the interval. In doing so, this created a space for Morecambe to break into, they were halted in their tracks by two challenges from Ethan Robson in the middle of the field.

The first 45 minutes concluded, and Liam Manning’s men had the advantage as they entered the break.

Second-Half
MK Dons doubled their lead five minutes into the second half. Matt Dennis, who was substituted on during the interval, controlled Grant's pass through to him brilliantly. The forward was being man-handled to the ground, but his strength and tenacity allowed him to swing a leg at the ball and bulge the back of the opposition’s net. 2-0

Henry Lawrence earned a raw from the crowd after his flair allowed him to skip past a Morecambe defender. The wing-back had earned his right to have a shot at goal, but Jacob Bedeau threw himself in front of the strike. The corner that followed was cleared.

MK Dons seemed to have a solid foundation at the back, which had limited the Shrimps from having a single shot at goal 64 minutes into the match.

Liam Manning’s possession-based style of football seemed to have a great impact during the tie. The away side continued to try and find a foothold in the game, but their few chances were encumbered by the Dons’ defence.

Matt Smith’s trickery allowed the Welshmen to bypass two defenders before he was scythed down by Liam Gibson, who was cautioned for the offence. The number seven then stood over the free-kick, but his delivery was cleared. Ten minutes remained.

The final whistle had been blown and MK Dons progressed into the Carabao Cup Round of 16, courtesy of two goals from Warren O’Hora and Matthew Dennis.

Manning: Use Cup form as fuel


Head Coach Liam Manning wants MK Dons to use their Cup form as fuel for when they return to Sky Bet League One action this weekend.

Tickets for MK Dons’ Carabao Cup Third Round tie with Morecambe are now on sale.

Liam Manning’s men host the Shrimpers at Stadium MK on Tuesday 8 November, looking to reach the Last 16 of the competition for only the second time in the Club’s history. Kick-off is at 7.45pm.

Tickets for this tie are available to buy in the East Stand only, with no Season Ticket seats being reserved.

Please note, no Season Ticket seats will be reserved for this fixture.

TRAVEL
Car parking will be FREE for this fixture and available on a first-come, first-served basis.

BUY
To book tickets CLICK HERE, visit the Box Office at Stadium MK or call 01908 622933. Tickets will be available to buy right up until kick-off from the Box Office. 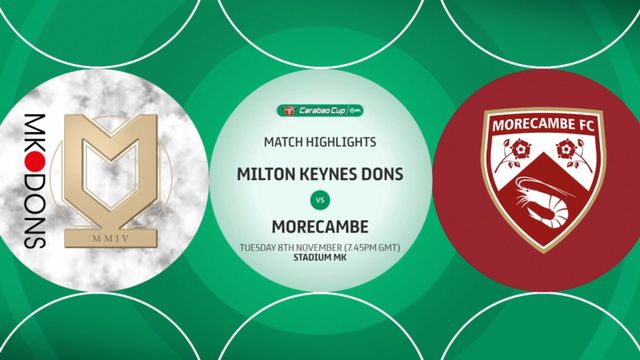 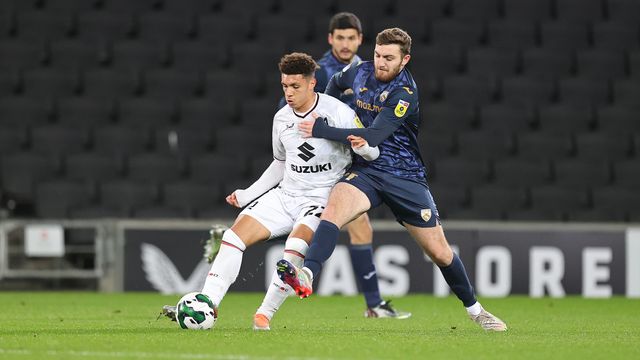 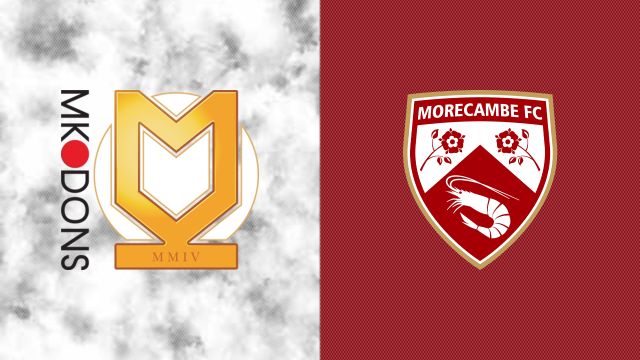