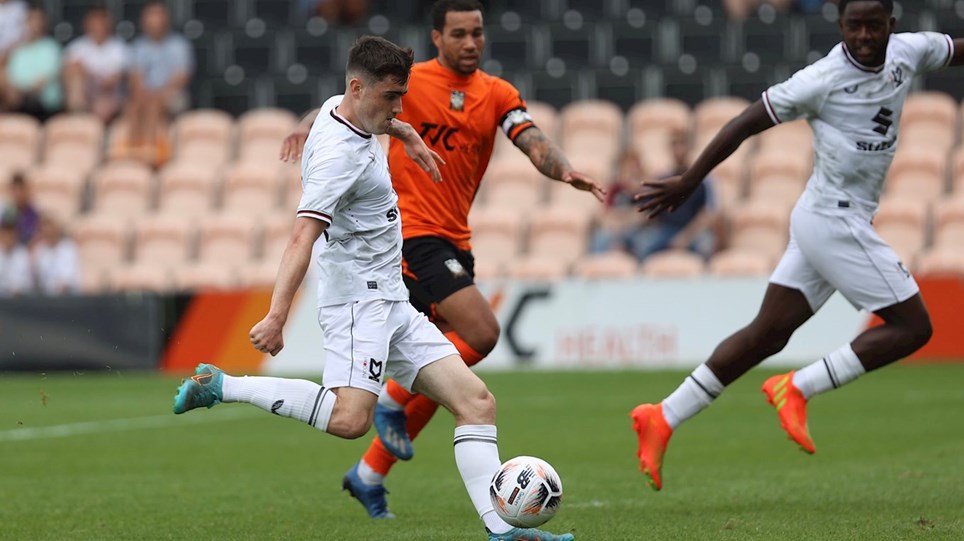 MK Dons finished their pre-season in winning fashion, beating Barnet 3-1 at The Hive.

Liam Manning’s men looked dominant in their final run-out of the summer, with summer signings Will Grigg, Bradley Johnson and Dawson Devoy all getting on the scoresheet.

Lawrence went close to a superb solo goal 10 minutes in but, after a brilliant down the right, his low shot was saved well by the feet of Laurie Walker. At the other end, Rob Hall failed to hit the target with a free-kick sent towards Cumming’s near post.

A quickly-taken corner led to a chance for Barry on 13 minutes but he couldn’t keep his header down after connecting with Lewington’s deep cross. The Dons then went agonisingly close to breaking the deadlock through Grigg but both he, and then Barry on the follow-up, were denied by Walker.

Midway through the first half, Grigg teed up Grant who saw a right-footed strike blocked by a Bees defender. Grigg then latched onto a forward pass from Tucker but also had his attempt kept away from goal by a Barnet man. From the resulting corner, Tucker volleyed over.

Tucker put one wide from a 34th-minute corner, which followed a free-kick which was won when Barry was scythed down for skipping past two Barnet defenders. Grigg then went close to finding Kemp in the area but the cross was cut out.

Grigg wasn’t to be denied three minutes later as he put MK Dons in front. Lawrence was the creator, delivering a cross in from the right which found the head of Grigg, who managed to direct his effort under Walker for the opening goal. 0-1.

Second half
Holland made a bright start to the second half, winning MK Dons an early corner which they weren’t able to take advantage of. Barnet were then fortuitous in winning a free-kick but Dale Gorman couldn’t find the target.

With eight minutes played in the second half, Holland again sprung the offside trap down the left flank. He spotted an unmarked Kemp but his low cross was intercepted by a defender at the crucial moment.

Holland was at it again on 58 minutes. This time his ball was aimed at Grigg but a sliding block from Collinge prevented the striker getting a second goal. From the resulting corner, Walker pulled off a brilliant save to prevent Grigg’s improvised flick finding the net.

Darragh Burns and Bradley Johnson came off the bench on the hour and the latter was immediately involved, beating his man down the right before crossing for Grigg, whose header was saved.

Harry Pritchard headed over for the hosts from a 68th-minute corner before the Dons were twice denied superbly by Walker – first he kept out Burns’ near-post try and then he picked himself to get a foot to Grant’s goal-bound attempt.

Walker, though, was beaten from the resulting corner as McEachran picked out Johnson, whose header was too powerful for the Barnet keeper to be able to stop it find his net. 0-2.

The Dons almost scored a third with 73 minutes played but some last-ditch defending prevented Grant and Grigg from being able to turn home from Holland’s cross.

That was the final involvement for Grant and Grigg, who were replaced by Dawson Devoy and Matt Dennis. Ethan Robson was also brought on in place of McEachran.

However, the Dons would restore their two-goal advantage when both Devoy and Dennis latched onto a long through pass from O’Hora. It was Devoy who took hold of the ball and he kept his composure one-on-one to slot past Walker. 1-3.

Dennis almost had is goal in the final minute of the game but, after latching onto a ball over the top, he couldn’t keep his effort down on the bounce. That was the final action for the Dons, who now turn their attention to next weekend’s season opener at Cambridge United.