Harvie: A good away win


Daniel Harvie played a key role in Tuesday’s success over Wigan Athletic, providing the ball for Peter Kioso’s leveller before delivering the cross that was diverted past Ben Amos for what proved to...


Liam Manning was full of praise for his MK Dons players after their hard-fought, but thoroughly deserved, 2-1 victory over Wigan Athletic at the DW Stadium. MK Dons came from behind to beat Wigan Athletic 2-1 at the DW Stadium, as Liam Manning’s men returned to winning ways in Sky Bet League One.

Wigan went in front after 21 minutes through Charlie Wyke but Peter Kioso levelled the scores on the half-hour mark, heading home from Daniel Harvie’s delivery.

Harvie was instrumental in the winning goal too as it was his low cross that was diverted past Ben Amos by a Wigan defender just seven minutes after the equaliser.

The victory, the Dons' first in four matches, keeps them sixth in the Sky Bet League One table.

Team news
MK Dons made one change from their defeat to Shrewsbury Town as Hiram Boateng replaced Troy Parrott. On the bench, Zak Jules returned from injury in place of Charlie Brown.

First half
MK Dons started brightly and worked their way into the Wigan box after just 45 seconds but Scott Twine’s effort was off target.

Mo Eisa then forced a save out of Ben Amos with a header from Matt O’Riley’s cross. Boateng also tried to test Amos early on but couldn’t muster the power needed to trouble the Wigan goalkeeper from 15 yards.

The hosts then threatened for the first time with a long throw and then successive corners – the latter of which flew dangerously across the Dons’ six-yard box but, fortunately, went untouched through for a goal kick.

Their first effort on goal was 14 minutes in – a header by Wyke, from a James McClean cross, that was high and wide.

MK Dons got in behind Wigan five minutes later but Daniel Harvie got the ball stuck under his feet after getting into the penalty area. His eventual shot was blocked and although he was able to send a ball back into the mix, the Dons were unable to get a shot away.

They were made to pay for that missed opportunity as almost immediately Wigan went on the attack and broke the deadlock through Wyke, who beat Fisher from close-range after latching onto Will Keane’s low cross. 1-0.

Manning’s men were quick to regain their composure and they soon worked their way back into the hosts penalty area. First, Matt O’Riley had a shot blocked and then Peter Kioso saw a volley deflect wide.

Twine and Eisa went close to connecting shortly after – the former’s through pass was just a little too heavy for the MK Dons number 10. It was then Harvie and Kioso’s turn to combine – and this time it proved fruitful.

From one wing back to another, Kioso leapt well at the far post to meet Harvie’s in-swinging cross and his bullet header, although, close to Amos, was too quick and powerful for the Wigan goalkeeper to get to it. 1-1.

With a spring in their step, the Dons came forward again. Kasumu got to the byline but saw his low cross put behind by Amos. That led to a corner from which Twine sent a right-footed curler over the bar.

Fisher was called into action moments later to keep out Wyke’s 18-yard effort. After successive corners, he then had to produce a smart save at his near post to deny McClean.

The Dons, though, were in the ascendancy and they found a way past the Wigan defence once again on 37 minutes to take the lead.

Harvie, again, was involved, latching onto Dean Lewington’s through pass before sending a low ball into the mix. Eisa was in the thick of it but the vital touch may have come off a Wigan defender – either way, the ball found its way in and the Dons were in front. 1-2.

Soon after the re-start, Darling and Fisher combined to stall Wigan as they searched for an immediate response – the latter palming Keane’s chipped ball over the crossbar after Darling had forced him too wide for a shot.

With three minutes to play in the half, Twine tried his luck from range but had his try deflected over the crossbar. That was the final effort on goal in a positive first-half for the visitors.

Second half
Boateng had an early sight of goal in the second period and stung the palms of Amos with a long-range drive. Soon after, O’Riley went agonisingly close with a curling free-kick which just flew past the right post of Amos.

It took a vital touch from Darikwa to prevent O’Riley’s reverse pass from putting Eisa clean through on goal on 50 minutes. At the other end, Kioso had to turn behind to deal with a dangerous ball in from Max Power.

With an hour played, Boateng worked his way into the Wigan area again but couldn’t find a way past Amos with a left-footed shot. The hosts responded through Naylor, whose effort was blocked by Lewington, and Jack Whatmough, who headed over the bar.

Darikwa fired one on goal from distance but had it deflected off target by his own teammate. Wigan remained on the front foot, with the Dons happy to soak up pressure and look to counter at any given opportunity.

To aid with that, Manning brought Max Watters off the bench in place of Eisa. Parrott also came off the bench to replace Kasumu, who hobbled off with what appeared to be cramp.
Both substitutes had to help defensively as the Dons were put under heavy pressure late on. Manning’s men stood firm, though, limiting the shots on goal to one late Stephen Humphrys effort that cleared the bar.

Not long after that, the whistle below. The Dons were back to winning ways – and impressively too.

Harvie: A good away win


Daniel Harvie played a key role in Tuesday’s success over Wigan Athletic, providing the ball for Peter Kioso’s leveller before delivering the cross that was diverted past Ben Amos for what proved to...


Liam Manning was full of praise for his MK Dons players after their hard-fought, but thoroughly deserved, 2-1 victory over Wigan Athletic at the DW Stadium. 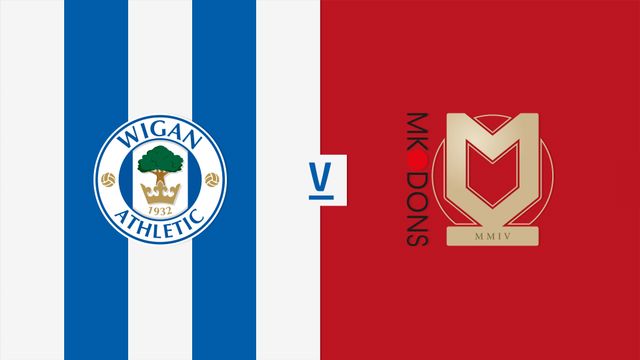 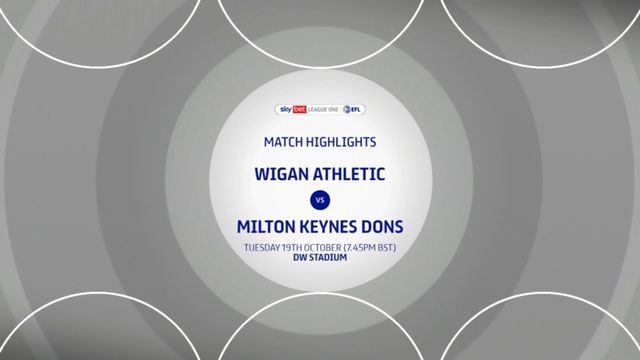 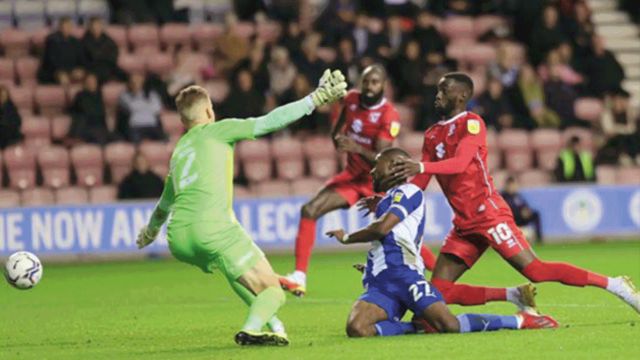