Twine: We were ruthless


Scott Twine was happy with MK Dons’ ruthlessness in their 4-1 victory over Cambridge United.

Trio named in Team of the Week


Three MK Dons players were named in the Sky Bet League One Team of the Week following Saturday’s 4-1 win over Cambridge United. 
Liam Manning praised an ‘enjoyable’ first-half performance from his MK Dons side, who made it back-to-back 4-1 wins with their victory over Cambridge United.

MK Dons moved back into the Sky Bet League One play-off positions with a dominant 4-1 victory over Cambridge United at Stadium MK.

Liam Manning’s men did most of their damage in the first half, as two goals from Scott Twine, either side of a Max Watters finish, had them 3-0 up at the break.

Watters completed a brace of his own with a volley in the second and, despite a late Sam Smith goal, the Dons weren’t to be denied a third league win in four games – and three points which lifts them into fifth in the Sky Bet League One table.

Team news
MK Dons made three changes from their Emirates FA Cup tie with Stevenage as Daniel Harvie, David Kasumu and Peter Kioso all returned to the starting XI. Tennai Watson, Mo Eisa, Josh Martin and Hiram Boateng were also back available for selection and were among the substitutes.

First half
The first shot of the game arrived in the seventh minute when Scott Twine teed up Matt O’Riley on the edge of the box. The MK Dons number seven cut onto his left but saw his shot blocked by a U’s defender.

Liam Manning’s men worked themselves deep into Cambridge territory again with 11 minutes played but weren’t able to fashion a shot on goal. Harvie was eventually able to cross but his ball in was gathered by Dimitar Mitov.

The Dons, though, were in again moments later – and this time they took the lead. Warren O’Hora started the move with a through ball to Max Watters, who looked up and spotted an unmarked Twine at the far post – his cross was inch-perfect for the MK Dons number nine, who made no mistake from six-yards. 1-0.

Twine tried his luck again on 18 minutes after a cross from Kioso made it through to the midfielder at the far post. His shot, however, took a deflection and looped into the arms of Mitov.

Mitov was quick off his line to beat Watters to a Twine through pass midway through the first half. Mitov, though, could do nothing to prevent the two combining for MK Dons’ second goal two minutes later.

McEachran found Twine initially and the attacking midfielder took a single touch before threading Watters through on goal. Watters latched onto the pass before firing a left-footed shot past the outstretched arm of Mitov and into the far corner. 2-0.

The through ball saw MK Dons in again on the half-hour as O’Riley lifted a ball over the top for Kasumu – the number 8, under pressure from a host of Cambridge defenders, dragged his shot wide.

Shortly after, Twine tested Mitov with a left-footed drive that the Cambridge goalkeeper was able to get behind. The visitors then threatened with a counter attack down the right but the Dons managed to deal with the danger.

Manning’s side were on the top of their form, though, and with nine minutes to play in the half, they had added a third. Kasumu was took quick for his man on the edge of the D and was subsequently brought down. That provided Twine with the opportunity to do what he does best – find the net from a free-kick. Another superb set-piece finish from the number nine. 3-0.

The Dons almost had a fourth before 45 minutes was up but Twine was denied a first-half hat-trick by Mitov and Watters was unable to get a shot away after pouncing on the loose ball.

There were opportunities for both teams in the three minutes of stoppage time. First, Cambridge, wasted an opportunity to get back into the game through James Brophy, who blazed over when well-placed inside the area. Watters then charged down the right from a Twine pass but could only find Mitov with his effort from an impossibly tight angle.

Second half
The Dons started the second half brightly, with Kioso driving into the area after only five minutes and seeing a low shot, across goal, deflected wide. From the resulting corner, O’Hora was denied at point-blank range by Mitov.

At the other end, Brophy fired high and wide from inside the area. Fisher then produced an excellent one-on-one save to keep out Sam Smith’s effort before diving on Jensen Weir’s shot from the corner that followed.

The Dons rode out the brief storm from their visitors and went back on the attack, almost finding a fourth through Kioso, whose strike towards the far post was tipped wide by Mitov.

Manning made his first substitution with 20 minutes to play, handing Ethan Robson his first appearance since the Papa John’s Trophy win over Wycombe Wanderers at the start of October.

He was having to help defend early on as Cambridge continued to push for a way back into the match. Kioso produced a vital clearance on the edge of his six-yard box to deny one dangerous attack on 72 minutes.

The game, though, was put to bed with just under a quarter of an hour to play as Twine and Watters combined for a third time to give MK Dons a four-goal lead.

Twine intercepted a loose pass deep inside Cambridge half and played a one-two with Watters, who took the shot on, on the volley, and rifled it past Mitov for his second. 4-0.

There wasn’t to be a clean sheet for Manning’s Dons as the U’s fired back with a goal from Sam Smith with eight minutes left to play. 4-1.

Watters almost re-established the four-goal lead with what would have been hat-trick goal but he was denied at the near post by Mitov.

There was to be no more goal action after that as the clock wound down on a dominant display from Manning's Dons who are back to winning ways at Stadium MK in emphatic style.

Twine: We were ruthless


Scott Twine was happy with MK Dons’ ruthlessness in their 4-1 victory over Cambridge United.

Trio named in Team of the Week


Three MK Dons players were named in the Sky Bet League One Team of the Week following Saturday’s 4-1 win over Cambridge United.


Liam Manning praised an ‘enjoyable’ first-half performance from his MK Dons side, who made it back-to-back 4-1 wins with their victory over Cambridge United. 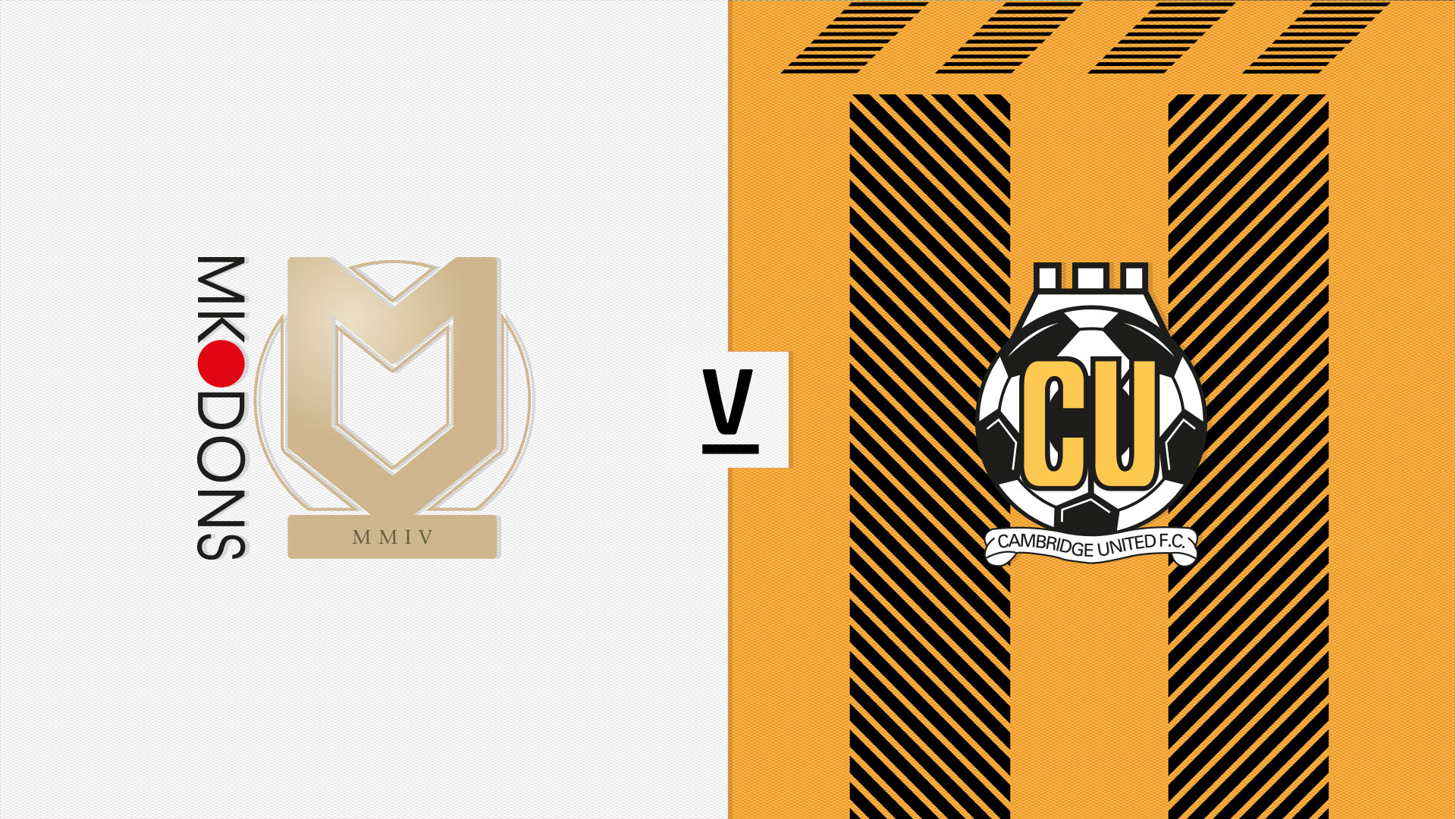 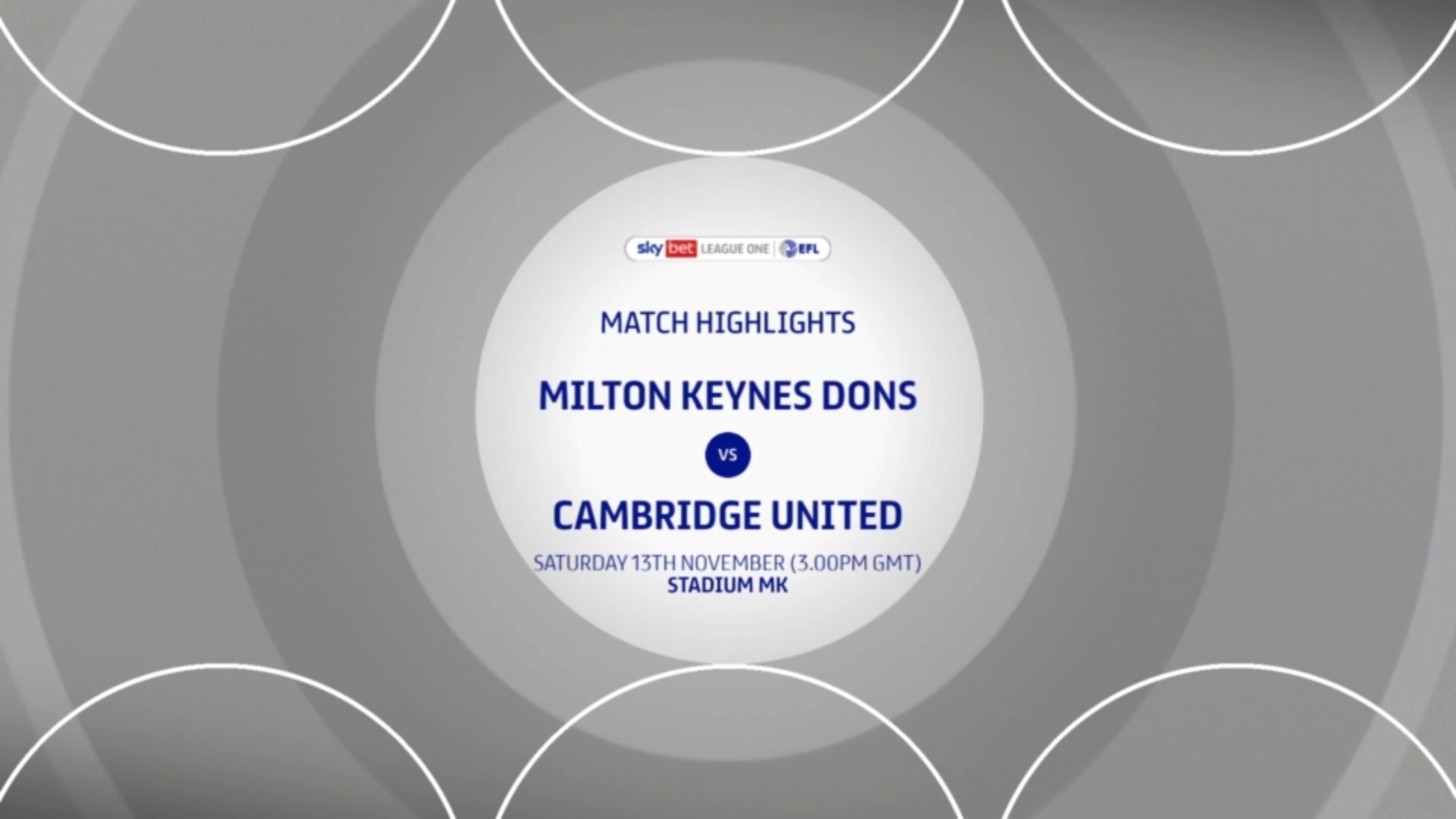 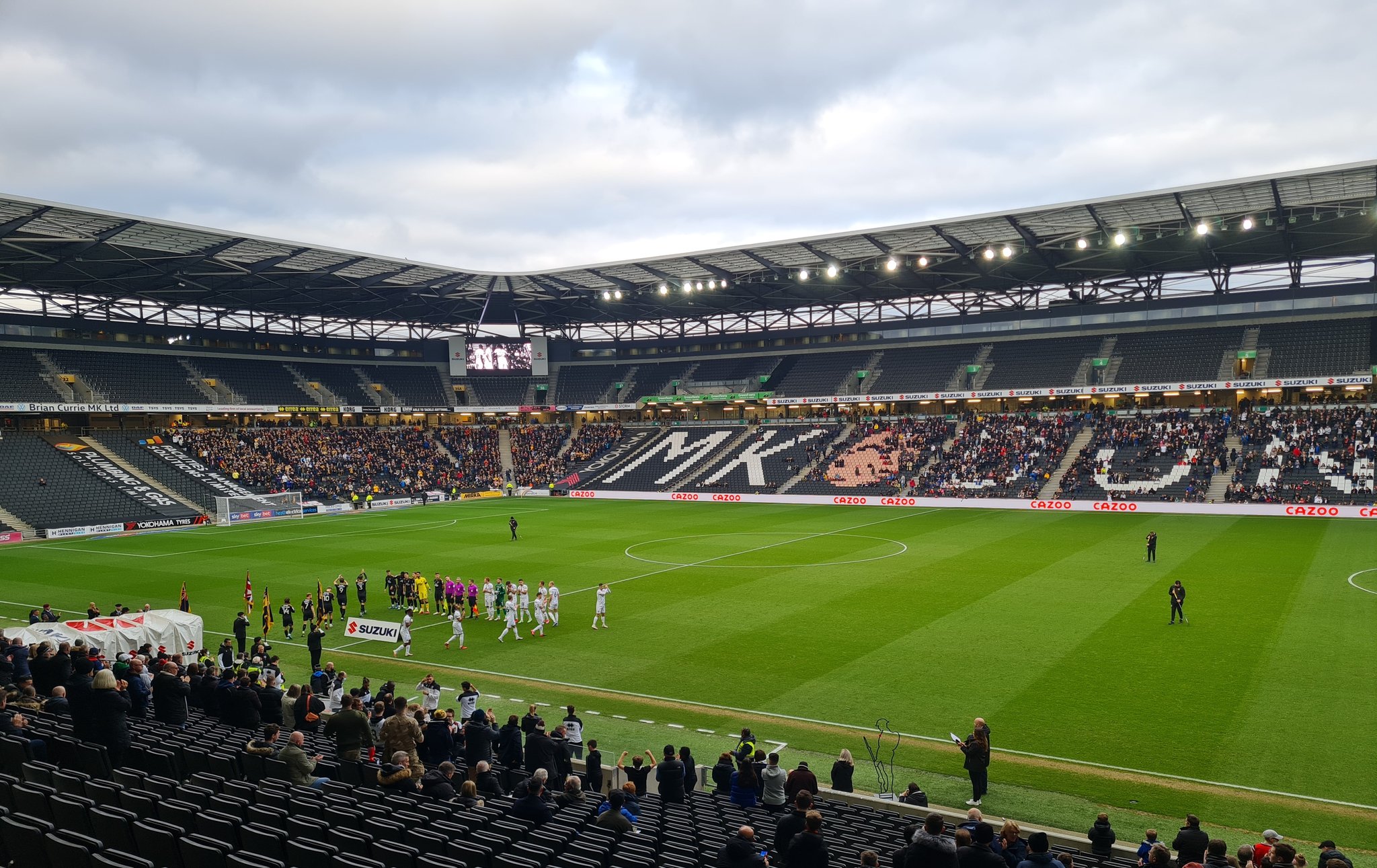