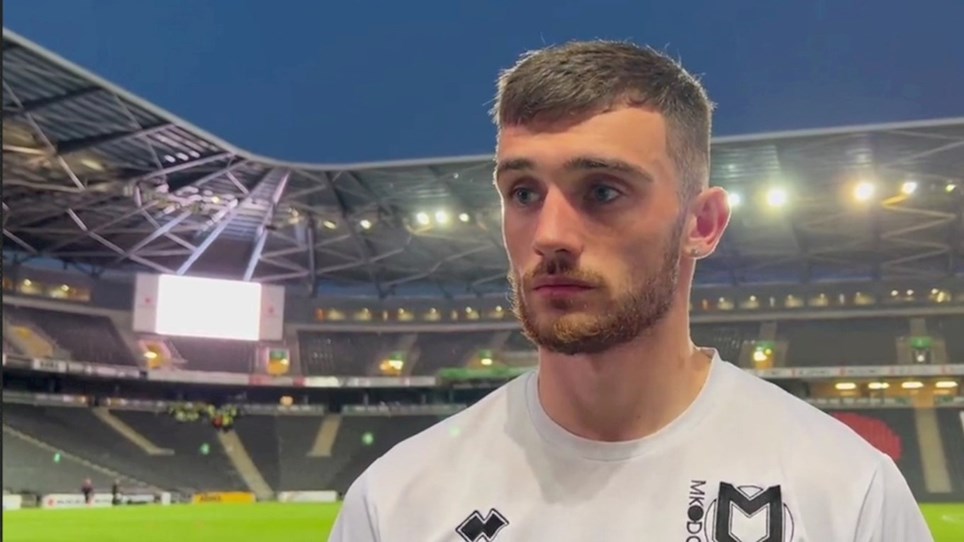 MK Dons gave it everything in their Sky Bet League One Play-Off Second Leg with Wycombe Wanderers at Stadium MK but were unable to overturn the two-goal deficit.

A dominant display was rewarded with an early goal from Troy Parrott but that was all that Liam Manning’s men were able to find against the Chairboys, who had goalkeeper David Stockdale to thank for a string of huge saves.

It meant their season was to an end at Stadium MK but it ended with a spirited showing in front of the home supporters.

Team news
MK Dons made two changes from Thursday night as Theo Corbeanu and Hiram Boateng came in for Josh McEachran and David Kasumu. Tennai Watson, meanwhile, made his return from injury and was among the substitutes.

First half
Liam Manning’s men made a fast start, winning a corner after just 30 seconds, from which Harry Darling sent a looping header onto the crossbar. Two further corners followed but the Dons were unable to get shots away.

On 14 minutes, Corbeanu tested David Stockdale with a low drive to the near post, which the Wycombe keeper kept out with a diving save. Less than a minute later, Twine had his first shot – a left-footed strike across which he just dragged wide.

The Dons maintained their strong start past the quarter-hour mark, with Daniel Harvie the next to try his luck with a glancing header from Scott Twine’s in-swinging free-kick – a header which landed wide of the target.

Manning’s side deserved a goal and it came with 25 minutes on the clock courtesy of Parrott, who stretched every inch of his body to meet Boateng’s cross and loop a header over Stockdale and into the net. 1-0.

The Dons, with their tails up, they went in search of a quick second and almost found it from a Twine free-kick but Stockdale produced a brilliant reaction save to keep it out. He had a second go from another free-kick moments later - this one hit the side netting.

With eight minutes to play in the first half, Parrott went agonisingly close to doubling his and the Dons’ tally but, after twisting and turning away from Anthony Stewart, he fired just wide of the right post. Corbeanu was then thwarted by the feet of Stockdale following a charging run into the box.

Cumming’s opposite number, Stockdale, was forced into another stop to prevent Corbeanu finding the net with a tight-angled attempt. The final action of the first half came from the resulting corner and a chance for Parrott, who fired just over from 15 yards.

Second half
The Dons picked up where they left off, making a strong start to the second half. Their best early chance fell to Parrott, who worked his way into the area but was denied by a stunning last-ditch tackle from Joe Jacobson.

Stockdale then came up with an equally spectacular diving save to prevent Corbeanu’s fierce strike finding the top corner. He, later, watched a Parrott half-volley fly over his crossbar after another well-worked attacking move.

The Chairboys threatened with 67 minutes on the clock as Dominic Gape blazed wide from the edge of the D. At the other end, Corbeanu drilled over from 25 yards out.

With a quarter of an hour to play, Manning went to his bench and brought on Connor Wickham for Boateng. His side had a penalty appeal turned down five minutes later for what appeared to be a handball by a Wycombe defender when blocking Twine’s strike.

Wickham then headed wide from Kesler Hayden’s cross. That was the wing-back’s final involvement as he was withdrawn for Dan Kemp with five minutes left to play while Watson also came on for an injured Harvie.

On 87 minutes, a shooting opportunity arose for Twine but his effort was charged down by Stewart. He, later, had a free-kick chance but couldn’t find the target.

Despite several long stoppages, only five minutes of added time were awarded. In the final one of those, Parrott forced Stockdale into his final save – another excellent stop which, ultimately, denied the Dons a chance in extra-time and brought to a close their 2021/22 season.