Manning: We never give up


Liam Manning praised his side’s resilience and spirit after they came from behind to earn a 1-1 draw against Wigan Athletic. After a tight first-half, Wigan took the lead through Tom Naylor but Darling headed home with three minutes of regulation time remaining to keep the Dons' unbeaten run intact.

It's a result that keeps Liam Manning's men in third, level on points with their opponents and four behind leaders Rotherham United.

Team news
MK Dons made three changes from their midweek win over Cheltenham Town as Daniel Harvie, Josh McEachran and Scott Twine all returned to the starting XI in place of the injured Tennai Watson as well as Matt Smith and Theo Corbeanu.

First half
It took a while for both sides to establish any control on the game, though the Dons did work two openings inside the opening 10 minutes on the counter. First, Harvie had a low cross intercepted and then Eisa saw his cross-field pass to Troy Parrott through to Ben Amos.

From an 11th-minute corner, Harvie got his head to Kaine Kesler Hayden’s cross but couldn’t direct his attempt goalwards. At the other end, Conor Coventry got himself in the way of Will Keane’s 20-yard try – the visitors’ first effort of the game.

Eisa did get onto a pass from Twine on the half-hour mark but was quickly closed by two Wigan defenders, including Jason Kerr who blocked the striker’s eventual shot.

With nine minutes to play until half-time, a dangerous free-kick delivery from Max Power went through the Dons box untouched. Manning and his side were then fortunate that a loose touch from Lang denied him a chance on goal after being picked out in the box by Humphrys.

Second half
MK Dons made a bright start to the second half, winning a free-kick which allowed them to get a ball into the box. Harvie’s eventual delivery was a teasing one but it was dealt with by Amos.

Shortly after, Kesler Hayden had the opportunity to put a ball into the box but had his low cross cut-out by a Wigan defender.

However, there was little he could do to prevent Wigan from taking the lead just before the hour-mark when Tom Pearce’s deflected strike landed at the feet of Naylor who, to the Dons’ surprise, was onside and able to break the deadlock with a right-footed finish. 0-1.

David Kasumu came on for McEachran as Manning went to the bench for the first time. He then introduced Corbeanu in place of Eisa with a quarter of an hour to play.
The Dons were struggling to build any momentum in response to the goal, largely down to the officials stopping play at seemingly every opportunity while also allowing Wigan to take as long as they liked to get the ball back in play.

Hiram Boateng was Manning’s final throw of the dice with five minutes left to play. He was picked out by Parrott almost immediately but wasn’t able to connect with a shot. He also came agonisingly close to heading home from Twine’s corner.

That led to another corner, from which the Dons were incensed that a handball wasn’t spotted by the referee.

They came away with another corner, though, and from it they levelled the scores. Twine’s delivery in from the left was inch-perfect for Darling to rise highest inside six-yard box and power home a header. 1-1.

The Dons had their tails up and with a minute remaining in stoppage time they came forward again with Corbeanu, who had a left-footed shot blocked by a Wigan defender.

Kasumu had the final opportunity in stoppage time – a drive from 25 yards which had Amos scrambling after it took a nick off a prone Boateng. Amos, though, made the save and ensured both sides left with a point to their name.

Manning: We never give up


Liam Manning praised his side’s resilience and spirit after they came from behind to earn a 1-1 draw against Wigan Athletic. 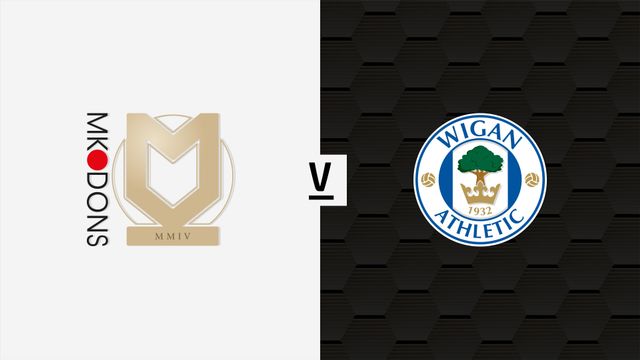 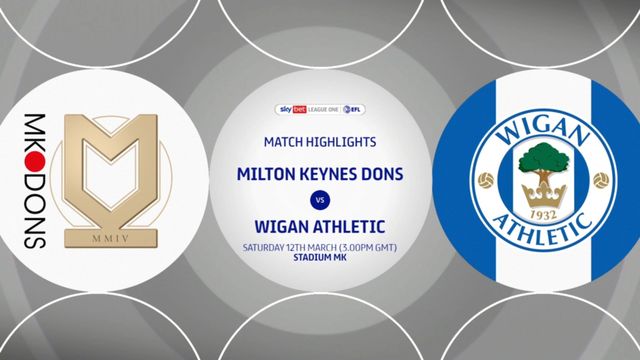 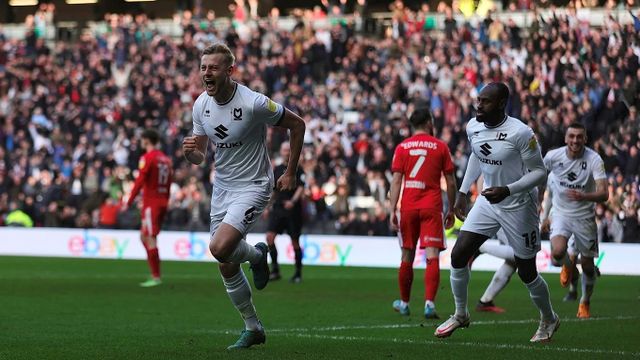