Liam Manning wasn’t hiding his frustration after MK Dons were held to a 1-1 draw by Accrington Stanley. MK Dons were frustrated by ten-man Accrington Stanley as they were held to a 1-1 draw at the Wham Stadium.

Liam Manning’s men had to come from behind to level the scores after Colby Bishop’s early opener – Mo Eisa grabbing the goal with a composed finish inside the area.

Accrington saw Liam Coyle sent off late in the first half but did enough to stifle the Dons for the remainder of the contest, despite the visitors’ clear dominance.

Team news
MK Dons made one change from their most recent league outing as David Kasumu replaced Josh McEachran in midfield. New signing Theo Corbeanu was unavailable after the Club didn’t receive back the necessary clearance in time to register him for the fixture.

First half
MK Dons had a bright start and created a chance for Mo Eisa inside the opening two minutes – his shot, 15-yards out, was deflected wide of the target.

The home side then won a free-kick, from which a far-post header flew over the bar. An ambitious long-range effort from John O’Sullivan followed soon after but that didn’t trouble Andrew Fisher.

Fisher did have to gather a header from O’Sullivan on seven minutes, though it was routine stuff for the MK Dons goalkeeper. However, he couldn’t get to Colby Bishop’s headed attempt a minute later, as the Accrington striker put his side in front with a looping effort. 1-0.

Stanley were looking threatening with direct balls into the box and with a quarter of an hour played, Fisher was called into action again to claim a header from Ross Sykes, up from defence.

In search of a leveller, the Dons worked another opportunity for Eisa on 21 minutes but the striker’s first-time hit was straight at Toby Savin, who saved. Savin also kept out a dipping and swerving Scott Twine free-kick before pouncing on the loose ball ahead of Eisa.

Eisa wasn’t to be denied for much longer, though, as he soon restored parity with his sixth goal of the season. Latching onto Twine’s through pass, the MK Dons number 10 carried the ball into the box before cutting onto his right and drilling a low shot past Savin. 1-1.

With their tails up, Manning’s side went looking for a quick second and almost found it through Twine. The midfielder did brilliantly to skip away from his man in the box but dragged his left-footed shot across goal and wide.

Twine, following some good work from Parrott, went close again on the half-hour mark as he fired just wide from a similar position on the left-hand side of the box.

With 34 minutes played, referee Will Finnie the centre of attention following an awfully high tackle by Liam Coyle on Harvie. Finnie took his time but decided, eventually, to show a straight red card to the Accrington man, reducing the home side to 10 men.

The Dons were dealt a blow of their own late in the half as Kasumu was forced off with an injury, replaced by Josh McEachran.

Still, they remained on the attack and Darling had an effort from distance deflected over the bar on 37 minutes while O’Riley also went agonisingly close in first-half stoppage from Harvie’s terrific cross – on the slide, though, he couldn’t direct a shot past Savin.

Second half
Accrington, who made two changes at the break, had the first attack of the second half from a long throw-in – Sykes, with the effort, shooting wide. The Dons then had theirs as Parrott saw an 18-yard effort palmed away by Savin.

From the resulting corner, played short, Harvie drilled one over the bar. Two other well-worked corners led to a half-chances for Eisa and O’Riley, but neither could truly trouble Savin.

Just prior to the hour, Twine tried his luck from distance but saw his strike sail over. Kioso then went close to meeting Dean Lewington’s teasing cross but was just beaten to it by Yeboah Amankwah.

Savin got fingertips to a Twine strike on 65 minutes as MK Dons again threatened a second. Twine next’s attempt was blocked by teammate O’Riley and deflected wide of the target.

Manning went to his bench for a second time with just under a quarter of an hour to play, introducing Tennai Watson in place of O’Hora. Boateng was the Head Coach’s final throw of the dice, coming on to replace Parrott for the final seven minutes.

With two minutes to play, Savin, again, denied Twine with a diving save. The Dons then thought they’d won it through Lewington but his cross-turned-shot came back off the post and somehow bounced away to safety.

That 91st-minute chance was the closest they came to snatching a late victory like at Sincil Bank. Another point on the board, though, and a chance to move into the top six on Tuesday when they take on AFC Wimbledon at Stadium MK.


Liam Manning wasn’t hiding his frustration after MK Dons were held to a 1-1 draw by Accrington Stanley. 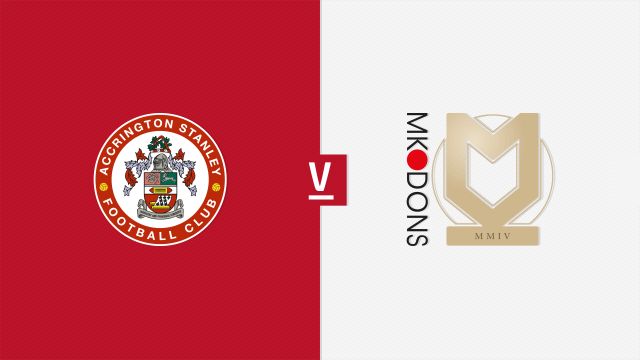 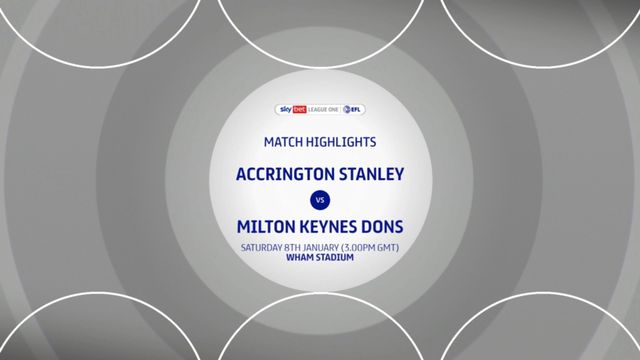 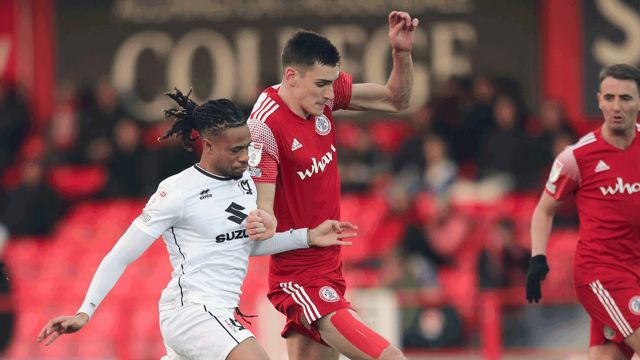