Connor Wickham spoke with iFollow MK Dons after scoring the deciding goal in the Dons’ 2-1 victory over Sunderland . 
Liam Manning praised his side’s ‘hard-to-beat’ mentality after their 2-1 triumph away at Sunderland. In a third versus fourth clash at the Stadium of Light, the Dons struck first through Mo Eisa but a second-half header from Ross Stewart had the scores tied heading into the closing stages.

Enter Wickham, against his former club, who slotted home the decisive goal just three minutes after coming off the bench to keep Liam Manning’s men third in the Sky Bet League One table, though they are now just three points adrift of the automatic promotion places.

Team news
MK Dons made one change from their goalless draw with Ipswich Town as Mo Eisa came in for Theo Corbeanu. Meanwhile, there was a return for David Kasumu who was back from injury and among the substitutes.

At the other end, Tennai Watson and Mo Eisa both forced saves out of Anthony Patterson inside the opening quarter of an hour – the latter with the better of the two opportunities albeit still from a tight angle.

Harry Darling went close to connecting with a Scott Twine corner soon after but was just beaten to the ball by a Sunderland head. On the half-hour, Troy Parrott went agonisingly close from Coventry’s ball forward but saw his half-volley brilliantly saved by Patterson.

That was the closest either side came to breaking the deadlock in the first half, though Stewart did head wide from a corner five minutes before the break.

Second half
Sunderland made a strong start to the second period, with Stewart beating the offside trap and sliding a dangerous ball across the six-yard box – a delivery which went through untouched.

The Dons, though, would make their first opening of the half count, taking the lead on 47 minutes thanks to Eisa’s eighth goal of the season.

After Manning’s men won possession, McEachran found himself with options to his left and right. He chose to play through Eisa and the striker did well to keep his composure as he ran the length of the Sunderland half and then calmly slot past Patterson. 0-1.

The visitors responded well and had an opportunity to level the scores from a free-kick soon after but Leon Dajuku somehow failed to hit the target from close range.

They did, however, equalise just before the hour mark through Stewart, who met substitute Elliot Embleton’s cross and glanced a header into the bottom right corner of Cumming’s net. 1-1.

Kasumu made his return to action soon after the goal, replacing McEachran in the middle of the park. Former Black Cat Connor Wickham also came off the bench to take the spot of the Dons’ goalscorer, Eisa – and he made an instant impact against his old club.

Breaking through alongside Parrott, who had intercepted a loose pass on half-way, Wickham collected a return pass from his attacking teammate before taking a touch and rolling a left-footed shot under Patterson and into the net. 1-2.

A brilliant block and clearance from Darling prevented Sunderland threatening a second leveller on 83 minutes. A minute later, Callum Doyle blasted over from range.

Watson limped off with four minutes to play and was replaced by Kaine Kesler Hayden. He immediately saw defensive partner O’Hora get in the way of a goal-bound acrobatic effort from Pritchard.

In the first of four minutes of stoppage time, Stewart headed wide while Wickham had an opportunity to seal the points with a second, only to just fire wide from a similar position to where he found the net goal.

That Wickham finish did prove to be enough, however, as the Dons maintained their unbeaten run with a big victory in the North East.


Connor Wickham spoke with iFollow MK Dons after scoring the deciding goal in the Dons’ 2-1 victory over Sunderland .


Liam Manning praised his side’s ‘hard-to-beat’ mentality after their 2-1 triumph away at Sunderland. 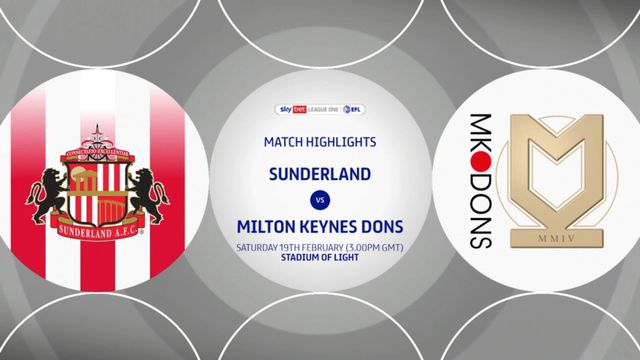 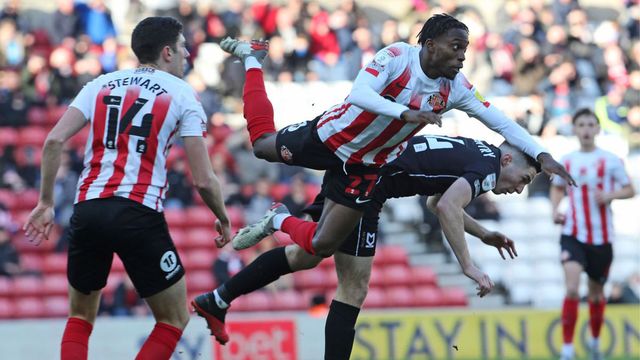