Boateng: We know we can be better


Hiram Boateng knows MK Dons can perform much better than they did against Oxford United and wants the team to prove that next time out. Manning: Be braver with the ball


Liam Manning has called on his MK Dons side to be braver in situations like the one they faced on Saturday against Oxford United. A short-handed MK Dons side were beaten 2-1 by Oxford United at Stadium MK.

Liam Manning’s men, who were without seven first-team players due to illness and injury, took a 21st-minute lead thanks to Hiram Boateng but conceded twice in the second half to suffer only their second defeat in six league matches.

Team news
MK Dons were forced into three changes, as Aden Baldwin, Hiram Boateng and Troy Parrott came in to replace Harry Darling, who was out injured, and Mo Eisa and Scott Twine who missed out through Covid-19 protocols.

First half
A minute in, Oxford United won themselves a free-kick, which led to a chance for Mark Sykes, who fired over. The visitors then had the ball in the net through Matty Taylor, though the goal was rightly chalked off - the U’s striker was clearly offside when he collected the pass inside the box.

MK Dons responded by earning a free-kick of their own, five yards from the edge of the box, following a foul on Daniel Harvie. In the absence of Twine, Parrott stepped up to take it but his effort was deflected into the arms of Simon Eastwood by the Oxford wall.

Liam Manning’s men found their stride after that and, on 11 minutes, they took the lead. Harvie started the move with a ball into Parrott who, in turn, found the run of Boateng. The MK Dons midfielder drove into the box and then kept his composure to send a left-footed shot across Eastwood and into his bottom corner. 1-0.

The Dons went close to doubling their lead when Parrott broke into the box and saw a shot saved by the feet of Eastwood. At the other end, Taylor had another goal disallowed for offside – this one much closer than the earlier incident.

With 20 minutes played, Nathan Holland fired wide for the visitors. Andrew Fisher was then called into action for the first time to gather a deflected strike by Taylor.

MK Dons came forward again on the half-hour mark with O’Riley, who got away from his man with a terrific touch but saw his shot deflected into the side netting. The number seven had another opportunity soon after and had this headed over the bar by a U’s defender.

From the corner, the Dons were awarded a free-kick which, in turn, led to a shooting chance for Watson, who blazed over. Soon after, they were counting their blessings when Cameron Brannagan wasted a glorious opportunity for Oxford, blasting over after intercepting a pass on the edge of the Dons box.

Second half
The Dons made a bright start to the second half, with Parrott latching onto a Josh McEachran through pass inside the opening 15 seconds and winning a corner from which Baldwin headed wide.

In response, Oxford threatened down the right but a vital touch from O’Hora dealt with a dangerous ball into the box. That led to a corner and a chance for Brannagan but he dragged a shot wide from 25 yards out.

Parrott broke forward again with 57 minutes on the clock and picked out O’Riley, whose first-time shot was blocked. It was Oxford, though, who were in the ascendancy and they eventually drew level just past the hour when Taylor glanced a header past Fisher from a Herbie Kane free-kick. 1-1.

Manning brought Charlie Brown off the bench to add fresh legs to his side, up against a buoyant Oxford side, who almost took the lead with a quarter of an hour to play but for a crucial interception by O’Hora, preventing a tap-in for Taylor.

Brown was involved soon after but he was unable to get onto Watson’s cutback, after a terrific run down the right by MK Dons right back.

However, just as they were beginning to threaten a second, the Dons were punished for a loose pass deep in their own half – Sykes the man making them pay with a finish into an unguarded net. 1-2.

The Dons were almost level immediately but Brown, at full stretch from Watson’s cross, was denied at point-blank range by Eastwood. O’Riley then went agonisingly close with a left-footed shot which skimmed the post on its way wide.

There was final chance for Manning's men in added time following a foul on Brown, five yards from the edge of the box, which saw Thorniley sent off for the visitors. Robson stepped up to take the free-kick but saw his effort saved by Eastwood.

Boateng: We know we can be better


Hiram Boateng knows MK Dons can perform much better than they did against Oxford United and wants the team to prove that next time out.

Manning: Be braver with the ball


Liam Manning has called on his MK Dons side to be braver in situations like the one they faced on Saturday against Oxford United. 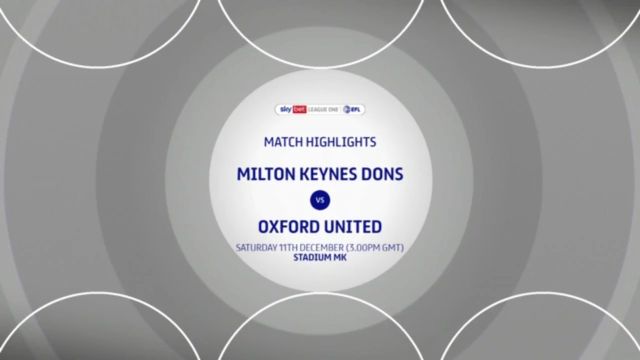 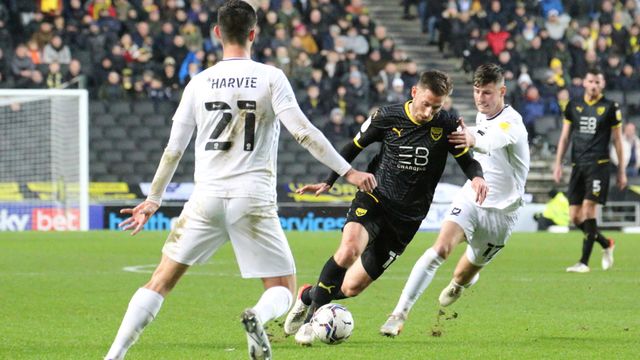