MK Dons came from behind to beat Northampton Town 3-1 in their opening match of the EFL Trophy.

Joseph Mills put Northampton ahead after 13 minutes but the Dons were able to restore parity before half-time courtesy of Regan Poole’s first senior goal.

Russell Martin’s side then dominated the second half and managed to complete the turnaround late on, with Sam Nombe and Matthew Sorinola grabbing the goals to seal all three points.

Martin handed MK Dons debuts to Laurie Walker and Warren O’Hora, who were two of four changes from Saturday’s Carabao Cup tie with Coventry City along with Regan Poole and Joe Mason.

The Dons started well, with Matthew Sorinola drilling an early low ball into the Northampton box. Jonathan Mitchell got down well to smother.

At the other end, former Don Ryan Watson sent a long-range effort over, moments before Cobblers striker Harry Smith was denied by a strong one-on-one stop from Walker.

Kasumu was the first MK Dons man to test Mitchell properly – stinging his palms with a fierce right-footed strike 25-yards from goal.

Northampton, though, took the lead with their next chance – a terrific volleyed effort from Joseph Mills, who kept himself onside from a deep cross. 0-1.

Kasumu again went close, as MK Dons looked for an immediate response, this time forcing Mitchell into a diving save with a curling left-footed strike. Later, Nombe tried his luck after latching onto Mason’s pass – the striker failed to find the target, however.

The Dons were certainly starting to take control of the contest and with 34 minutes played they drew level. Lasse Sorensen started the move which led to Sorinola firing a ball across goal to Poole, who took a touch before lashing home his first MK Dons goal. 1-1.

Martin’s men almost had a second four minutes later, with Cargill sending an acrobatic effort just wide following another swift move down the left flank. The centre-back should have put the Dons ahead shortly after, but couldn’t keep his shot down after latching onto Poole’s header down.

Things were deadlocked entering the break but the Dons went about changing that right away.

Nombe created a chance for himself two minutes in but couldn’t find the target from a tight angle. He later beat the offside trap, only to fail in picking out an MK Dons shirt in a crowded penalty area. The loose ball was then hit goalwards by Sorensen, but saved.

A fantastic move down the right-hand side, started by a trademark cross-field ball from Sorensen, provided an opportunity for Kasumu inside the area, but he miss-hit his shot and it squirmed wide of the left post.

Sorensen was denied just before the hour with a 20-yard try that Mitchell gathered. Martin then made his first substitution of the evening, replacing Mason with Carlton Morris in attack.

The Dons were keeping their visitors relatively quiet throughout the second half but they did need Walker to bail them out on 67 minutes – the keeper producing a stunning diving save to keep out a point-blank header.

Martin’s second alteration saw John Freeman come on for Sorensen, fresh after his senior debut at the weekend. He made an instant impact too – creating the goal which saw MK Dons take the lead.

After a one-two with Sorinola on the left channel, Freeman composed himself and picked out an unmarked Nombe, who directed a first-time shot beyond the outstretched arm of Mitchell and into the bottom corner. 2-1.

Freeman was involved again, two minutes, later as MK Dons then added a third to make the tie safe.

The midfielder worked alongside Kasumu to win possession deep inside the Northampton half, before receiving the ball back off Carlton Morris, who had carried it into the area.

Freeman then laid on for Sorinola, who took one touch before lashing a sumptuous left-footed finish into the roof of the net. 3-1.

Nombe and Cargill both had chances in the closing stages to add to the lead but it wasn't to be. Regardless, MK Dons ensured a winning start to the EFL Trophy campaign in their final match before their Sky Bet League opener with Doncaster Rovers. 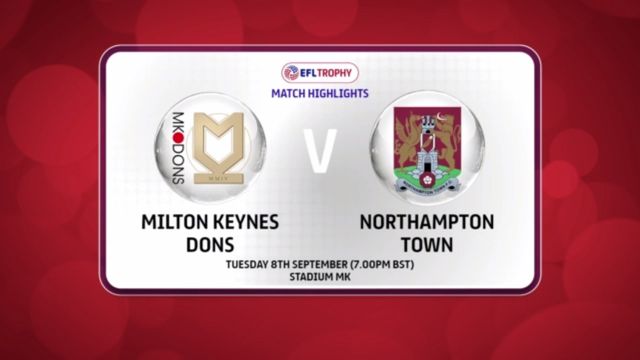 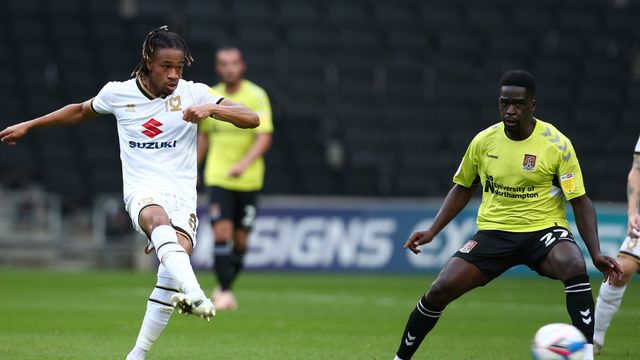