After a decade in the Academy system, Jay Bird made his MK Dons debut on Tuesday night as his goals helped Russell Martin’s side to a 3-2 win over Stevenage. Two goals from debutant Jay Bird secured MK Dons' passage through to the knockout stages of the EFL Trophy.

The Dons, who won their opening match of the competition against Northampton Town took the lead against Stevenage thanks to goals from Carlton Morris and Jay Bird, however, their hosts reduced the deficit before the break from a Louis Thompson own goal.

Stevenage then drew level from Effiong's penalty, however, Jay Bird's second of the evening secured the win which, coupled with a victory for Northampton Town over Southampton Town Under-21s later on Tuesday night, meant Russell Martin's men will progress to the knockout stages of the EFL Trophy.

MK Dons made nine changes from the Sky Bet League One outing against Ipswich Town with Lasse Sorensen and Callum Brittain retaining their places in the starting XI.

Louis Thompson was handed his first start of the season, while Laurie Walker was back in goal for his second appearance in the EFL Trophy.

Warren O’Hora, Baily Cargill, and Jordan Houghton made up the defensive three, with Matty Sorinola and Brittain occupying the wing-back positions.

Louis Thompson sat alongside Sorensen and John Freeman in midfield, with Sam Nombe alongside debutant Jay Bird in attack.

It was a frantic start to the encounter as Stevenage hit MK Dons on the counter within the opening minute. Having won possession inside his half, Danny Newton drove Stevenage forward with his ambitious effort being saved well by Laurie Walker.

Stevenage then hit the post on six-minutes through Effiong, he met Hutton’s cross well but saw his effort rebound back into play.

Sorinola looked to create the first chance of the evening for the Dons, having beaten his man, Sorinola was unable to pick out a Dons shirt as his cross went out of play.

MK Dons then cut open Stevenage as they played from back to front with patience, Brittain cut the ball back to Lasse who was unable to get the ball out from under his feet.

On 25-minutes, Johnson produced two impressive saves to deny Russell Martin’s side the lead. Jay Bird played in Brittain who cut back into the path of Nombe, the striker hit first time towards goal only to de denied by Johnson. Sorinola tried to convert the rebound, his effort fell to Brittain who was denied yet again by some impressive goalkeeping.

Newton had the chance to give Stevenage the lead shortly before the hour mark, he beat the offside trap to find himself three on one with Walker. The recovering O’Hora done enough to delay the short enabling Walker to clean up at his feet.

Johnson then produced another save this time denying Sorinola who cut onto his right foot before looking to find the net from the edge of the box. From the resulting corner, however, Dons found a way past Johnson via Carlton Morris.

Sorensen’s corner picked out the unmarked O’Hora who saw his powerful header saved by Johnson, however, the rebound fell into the path of Morris who converted from close range. 0-1.

The Dons doubled their lead on 37-minutes as Jay Bird opened his MK Dons account on his debut. Brittain started the move off with a superb cross-field pass into the path of Morris, he drilled the ball across goal, however, Sorensen was denied by a superb point-blank save. Bird was on hand to slam home for his first professional goal. 0-2.

Stevenage pulled one back on the stroke of half-time, an ambitious long ball was put over the defence as Louis Thompson looked to head back to Walker. The Dons keeper, however, had come to claim – leaving Thompson’s header to find its into an empty net. 1-2.

Carlton Morris looked to add his second minutes into the second half, he beat his man on the left before creating space to shoot inside the box. His effort ended wide of the far post.

Lasse Sorensen then tried his luck from a long-range free-kick, his strike was seen narrowly wide by Johnson.

With 64-minutes gone, Stevenage were handed the chance to level the scoring after Jordan Houghton fouled Akinwande inside the box, giving the referee no choice but to award a penalty. Effiong took on penalty-taking duties and hammered down the middle to level. 2-2.

With the game drawing to a close, the Dons turned the screw as they looked for the next goal of the evening - and they got their just rewards. The Dons kept the corner alive on the edge of the box before Bird found the top corner in stunning fashion when a shot really wasn't on. 2-3.

Walker then produced an impressive save from close-range to keep the Dons ahead. James-Wildin drove forward from right-back


After a decade in the Academy system, Jay Bird made his MK Dons debut on Tuesday night as his goals helped Russell Martin’s side to a 3-2 win over Stevenage. 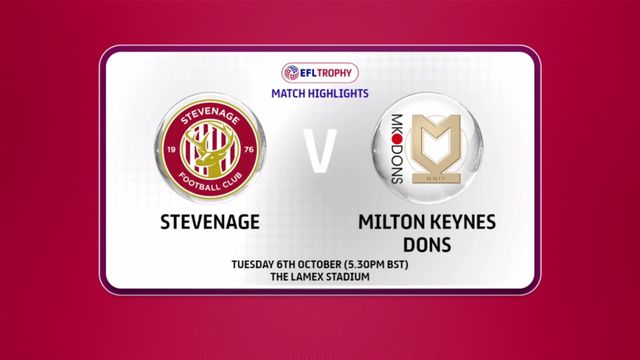 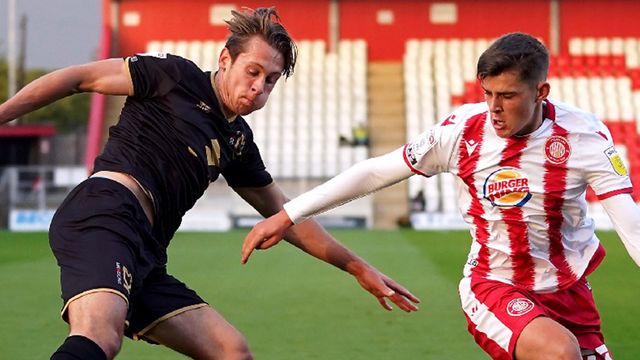