Russell Martin took responsibility after his MK Dons side were beaten 3-0 by Wigan Athletic at the DW Stadium. 
Dean Lewington has called on MK Dons to 'improve' and not 'change' as they bid to bounce back from a disappointing run of results. MK Dons endured a disappointing day at the DW Stadium as they were beaten 3-0 by Wigan Athletic.

The scrappy Latics went ahead on 23 minutes through George Johnston before putting the game to bed in the second half through Callum Lang and then Joe Dodoo.

Defeat for Russell Martin’s men saw them drop to 16th in the Sky Bet League One table. They are 12 points adrift of the bottom four with 13 games left to play.

There were three changes made by boss Martin, with Jordan Houghton making his first start since November. Daniel Harvie and Joe Mason were the others who come in while Louis Thompson was back in the squad and among the substitutes.

It was Wigan who had the first attempt, three minutes in, as Callum Lang beat the Dons’ offside trap. Lang only had Fisher to beat as he bore down on goal and it was the Dons goalkeeper who came out on top with a terrific save.

Martin’s men took some time to get going, with the DW Stadium turf making things difficult for the Dons to get into any sort of rhythm with their free-flowing football.

Their first shot didn’t arrive until the 20th minute when Mason tried his luck from distance – an effort which was deflected wide of goal by a Wigan block.

They weren’t able to build on that, though, and fell behind three minutes later through Johnston, who met a left-wing cross and headed past Fisher from 15 yards out. 1-0.

The Dons worked a good opening for an equaliser on the half-hour mark but Fraser’s first-time strike was blocked. From the resulting corner, Harvie headed over.

That was his final involvement as Martin soon made a double tactical switch, replacing Harvie and Houghton with Andrew Surman and Zak Jules.

Martin’s side had another effort on goal blocked, this time from O’Riley, with 11 minutes to play in the half. At the other end, Fisher pulled off a terrific double save to deny Tendayi Darikwa and then Gavin Massey.

Shortly after, Laird went close producing a brilliant individual goal but, after cutting in from the right, saw his fierce effort tipped over by the bar by Jamie Jones. Darling also threatened with a stunning effort from 30 yards out, which crashed against the woodwork.

There was a moment of controversy two minutes before the break when O’Riley’s cross appeared to strike the arm of a Wigan defender. The referee did blow his whistle but pulled play back for an early foul on Fraser. The free-kick came to nothing.

The Dons had a chance to level just two minutes into the second period but Mason curled wide from the edge of the box after being teed up by Laird. Darling then tried a long-range effort of his own, which deflected above the Wigan goal.

Cameron Jerome was Martin’s third change when he came off the bench with half an hour remaining.

The Dons’ hopes of salvaging a result, though, were dashed when Lang doubled the Latics’ lead with a well-placed header – Wigan’s first shot of the second half. 2-0.

The contest became uncertifiable seven minutes later when Latics punished the Dons for a loose pass in defence to add a third – Dodoo the man who converted from an unselfish Solomon-Otabor lay-off. 3-0.

To their credit, the Dons didn’t give up hope of getting back into the game. Fraser struck the crossbar from the edge of the D while Surman fired just wide from yard or two closer.

They weren’t, though, able to get themselves on the scoresheet, completing a forgettable and, ultimately, fruitless trip to Greater Manchester for Martin and his Dons, who face Blackpool at Stadium MK on Tuesday.


Russell Martin took responsibility after his MK Dons side were beaten 3-0 by Wigan Athletic at the DW Stadium.


Dean Lewington has called on MK Dons to 'improve' and not 'change' as they bid to bounce back from a disappointing run of results. 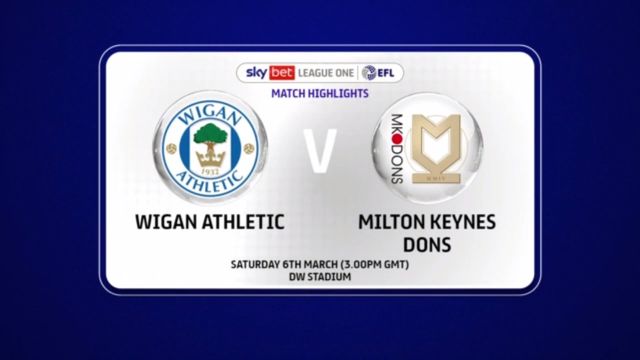 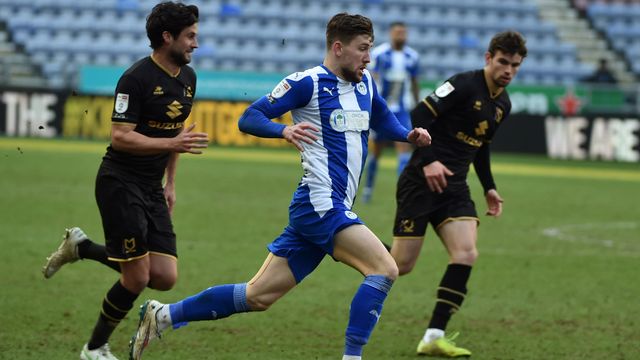