Russ: Great character to bounce back with back-to-back wins


Russell Martin has praised the character of his MK Dons side, after they responded to their five-game winless run by securing back-to-back victories at Stadium MK. 
mkdons.com delves into the numbers behind the 2-1 win over Plymouth Argyle. 
Russell Martin has provided early injury updates on Ethan Laird, who both picked up injuries in Tuesday’s win over Plymouth Argyle.

Cameron Jerome put Russell Martin’s men in the driving seat with his 15th goal of the campaign but with half an hour to play, Plymouth levelled the scores through Conor Grant’s stunning strike.

For the second game in succession, though, the Dons found a way to win it late – this time, Scott Fraser the man stepping up with a 90th-minute penalty to secure three points that lift them up to 14th in the Sky Bet League One table, 15 points clear of the bottom four and to within seven of the play-off places.

The Dons were unchanged for the third straight game, while Ben Gladwin returned from injury to take up a place on the bench.

They made a confident start and threatened goal for the first time on four minutes with an 18-yard strike from Cameron Jerome that was blocked. Plymouth then had their first attack, which was halted by an excellent Matt O’Riley tackle inside his own box.

There was a heart in mouth moment nine minutes in when a Dean Lewington pass back to Andrew Fisher was intercepted by Niall Ennis. He teed up Luke Jephcott, who only had Harry Darling to beat but couldn’t, with the MK Dons man getting in the way of his goal-bound effort before watching the follow-up fly over his head and the crossbar.

The Dons responded by almost taking the lead. Darling, following a marauding run forward, played through Jerome, but he couldn’t bring the ball into his stride. He did, though, manage to find Fraser however the MK Dons number 10 fired over.

Less than two minutes later, Danny Mayor went within a whisker of putting the visitors ahead with a first-time, right-footed effort which whistled just past Fisher’s post.

Martin’s men then put together a neat attacking move down the left which resulted in Fraser whipping a ball in for Jerome – one which was intercepted by Kelland Watts at the near post. From the resulting corner, Fraser had a looping volley claimed by Mike Cooper.

The Dons were having real joy down the left-hand side and it was down that flank, on 22 minutes, where they look the lead.

After a 30-pass move, Sorinola broke down the left but opted to take his time to allow bodies to fill up the penalty area. He eventually shifted the ball onto his right and, just like he did twice on Saturday, delivered an inch-perfect cross for Jerome to head home. 1-0.

The Dons had a great opportunity to double their lead on the half-hour through Fraser but, after receiving Laird’s pass and getting away from his man, the Scot sent his effort straight down the throat of Cooper.

At the other end, Ennis went close to connecting with an excellent in-swinging cross which was gratefully received by Fisher.

Jerome found himself in on goal with eight minutes remaining in the half but saw his stinging half-volley palmed away by Cooper. Mayor then tried his luck from distance for Plymouth with an attempt that flew harmlessly over Fisher’s goal.

Martin was forced into a change at half-time, with Louis Thompson replacing McEachran. His goalkeeper was called into action early in the second period, producing a strong save to deny Mayor.

The Dons had their first second-half shot five minutes in – O’Riley, cutting in from the left, but seeing his curling attempt blocked by his own teammate, Fraser. Jerome then went close to connecting with Fraser but the ball was just a yard too strong for the midfilder.

Sub Thompson tried to take matters into his own hands on 54 minutes, running half the length of the pitch before firing off target from the edge of the area. Mayor had another go at beating Fisher just before the hour but was denied by a diving save down to the Dons goalkeeper’s right.

Plymouth were rewarded for their strong start to the second half with a goal on 61 minutes. The strike from Grant was nothing short of superb but the Dons were unhappy with what they deemed to be an offside involvement from Hardie in the build-up. 1-1.

The goal stood, though, and that set up an interesting final half an hour at Stadium MK. Martin made three changes for it too, with Gladwin, Will Grigg and Daniel Harvie all brought off the bench.

Grigg and Harvie were both awaiting a delivery from Thompson soon after their arrival but the midfielder’s ball in was cut out by a sliding tackle. From the resulting corner, Grigg had an opportunity but was kept out by Cooper at his near post.

The changes had sparked MK Dons back into life and they established control as the game moved into its closing stages. One of those substitutes, Grigg, did well to reach Sorinola’s low cross but he wasn’t able to direct the ball on target.

Once again, though, there was to late drama at Stadium MK and, just like Saturday, it went in favour of the home side.

With less than a minute remaining in regulation time, Gladwin swung in a cross which was blocked by the arm of Joe Edwards. Referee Seb Stockbridge immediately pointed to the penalty spot and that provided Fraser with the chance to win it – and he did, beating Cooper from 12 yards with the final meaningul moment of the game. 2-1.

Russ: Great character to bounce back with back-to-back wins


Russell Martin has praised the character of his MK Dons side, after they responded to their five-game winless run by securing back-to-back victories at Stadium MK.


mkdons.com delves into the numbers behind the 2-1 win over Plymouth Argyle.


Russell Martin has provided early injury updates on Ethan Laird, who both picked up injuries in Tuesday’s win over Plymouth Argyle. 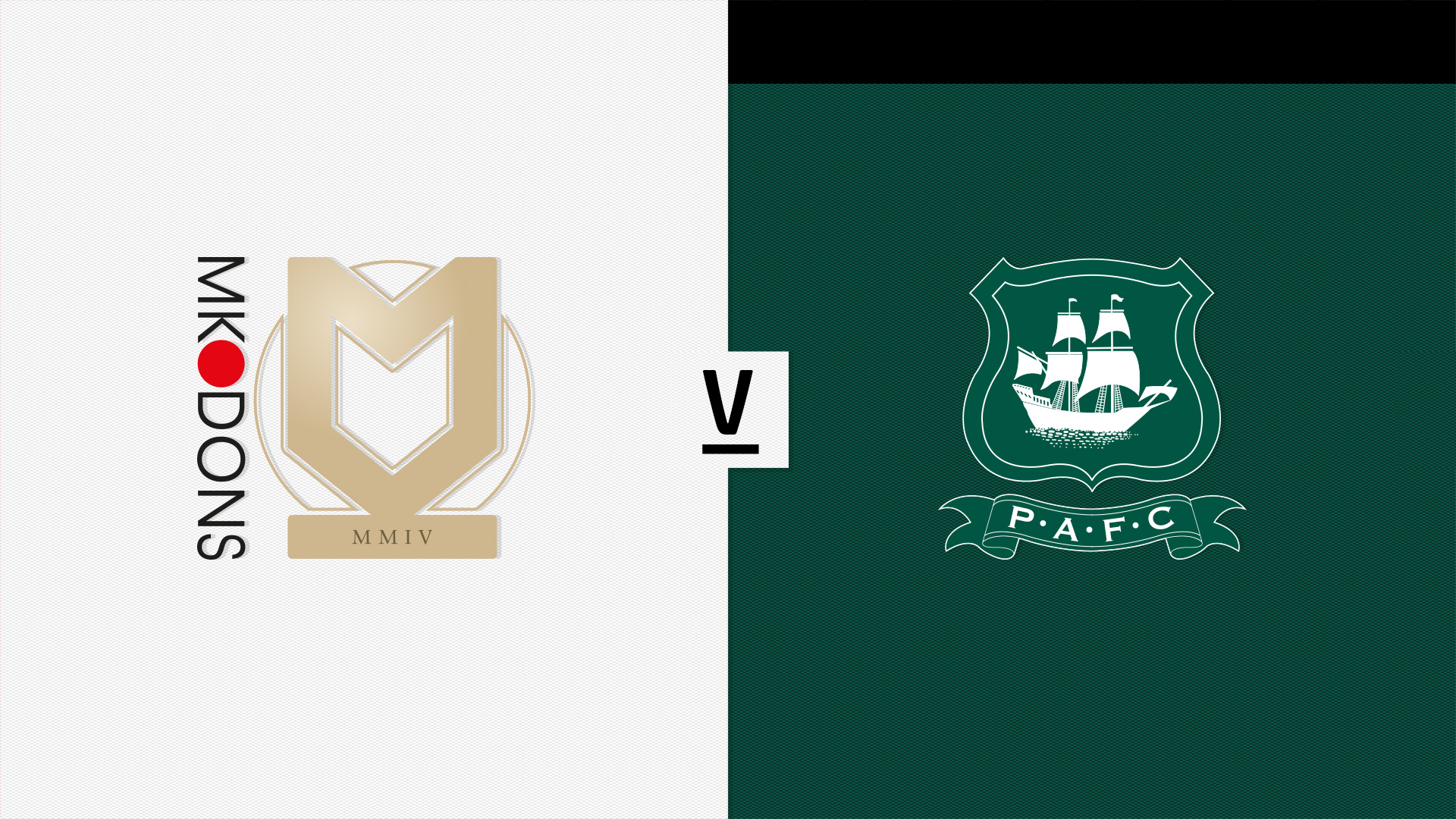 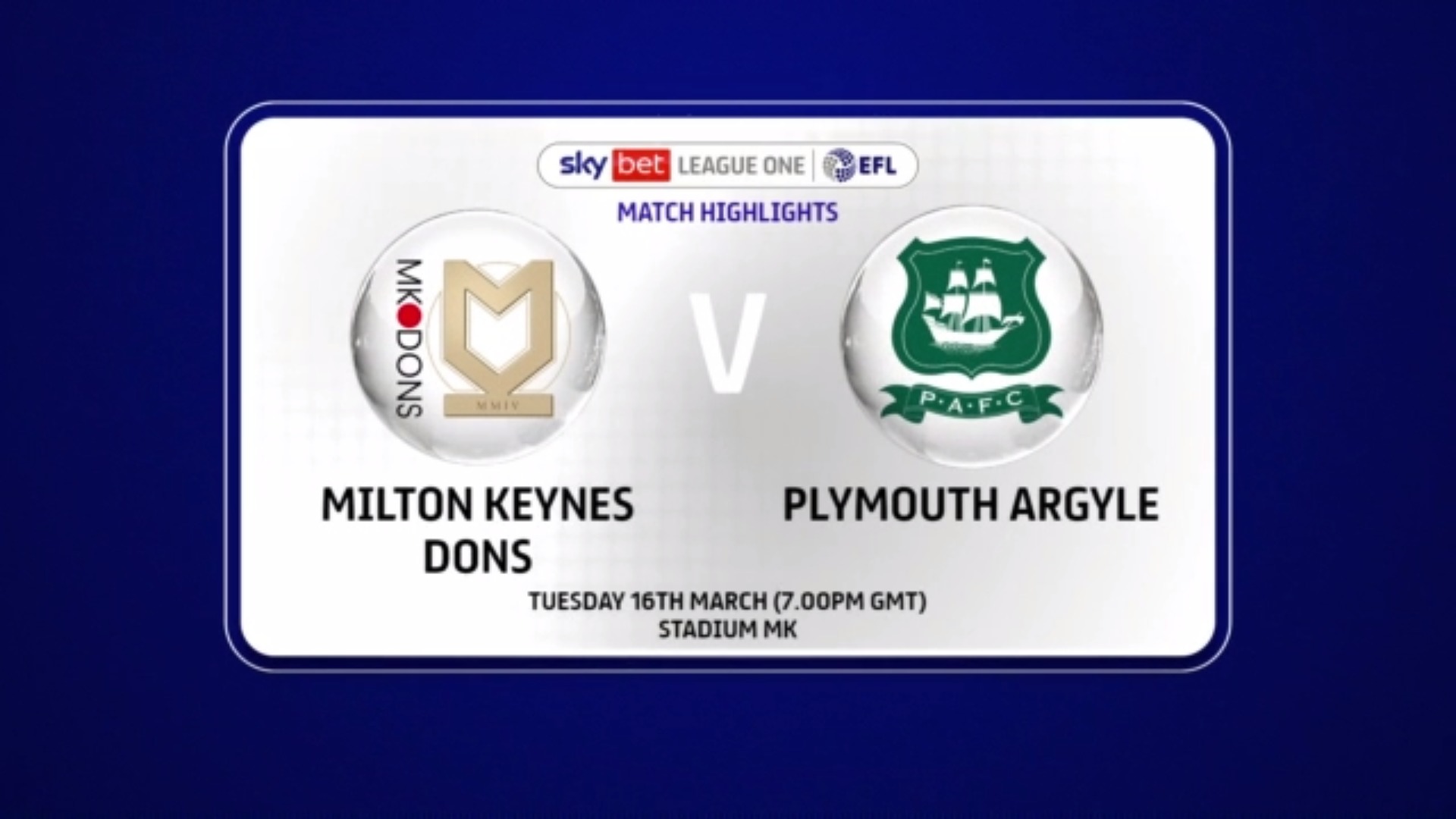 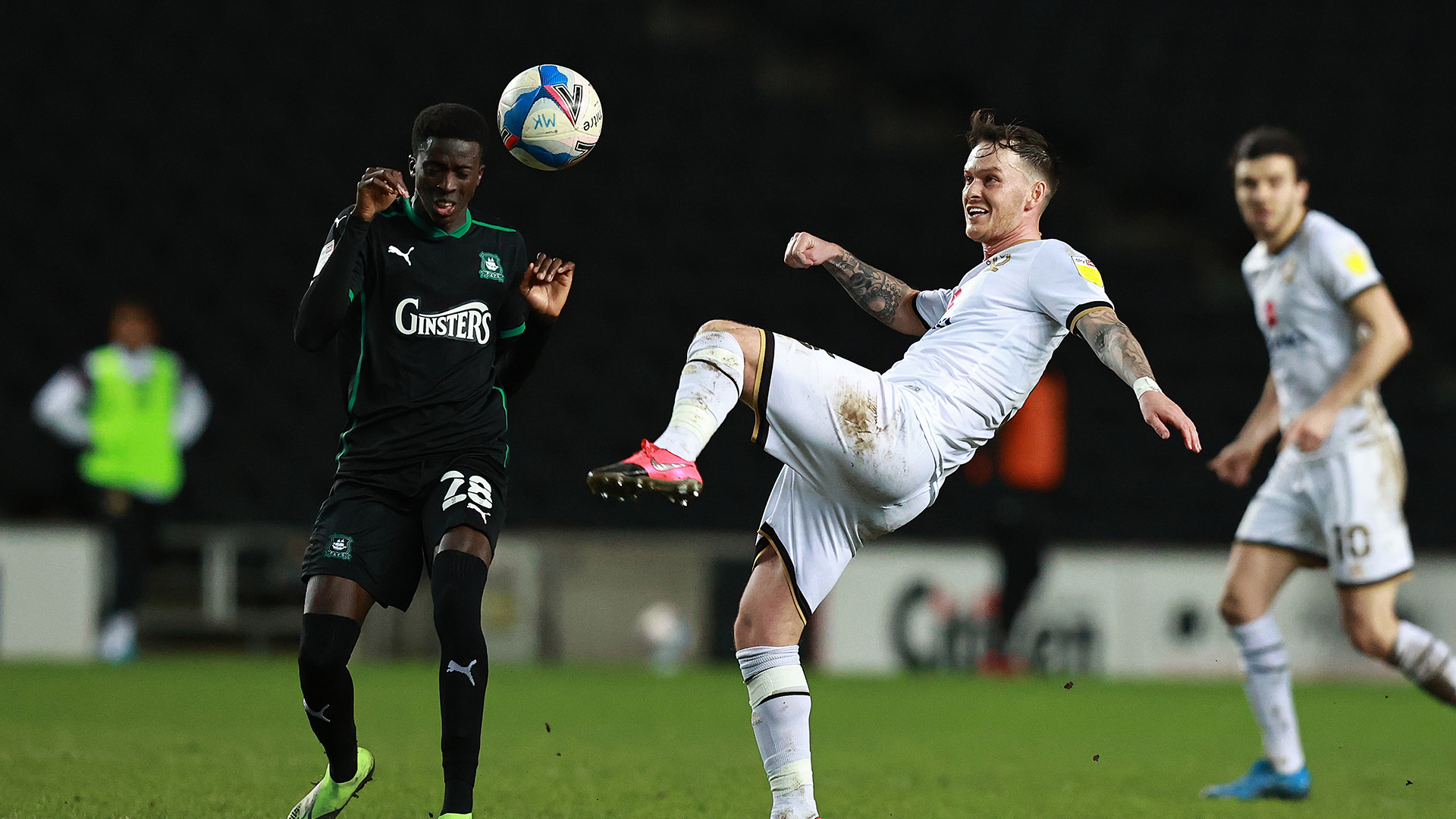