MK Dons will be looking to secure a fourth straight Sky Bet League One success when they welcome Doncaster Rovers to Stadium MK today.

The Dons have bounced back brilliantly from their five-game winless run to triumph in each of their last three – victories over Accrington Stanley, Plymouth Argyle and, most recently, in-form Burton Albion.

Should Russell Martin’s men make it four in a row this afternoon, it will be the first time a Dons side has recorded such a feat since between February and March 2019, en route to promotion from Sky Bet League Two.

THE OPPOSITION
Doncaster Rovers currently sit fifth in the Sky Bet League One table as they look to secure a spot in the Play-Offs. Rovers are nine points off second-placed Peterborough United and have a one point gap between Charlton Athletic in seventh.

The majority of the season has been managed by Darren Moore, however, he departed for Sheffield Wednesday at the start of March with Andy Butler taking charge on an interim basis. The 37-year-old made over 180 appearances during his time at The Keepmoat Stadium and has also managed Doncaster Rovers Belles.

Fejiri Okenabirhie leads the goalscoring charts for Doncaster having found the back of the net 11 times in all competitions this season. Reece James placed second, with the defender scoring an impressive seven goals this campaign - with a further three assists to his name. James has also created the most chances for Butler's side with 34 chances created.

LAST TIME OUT
MK Dons made it three wins in a row thanks to a 2-1 triumph over Burton Albion at the Pirelli Stadium.

Lucas Akins pulled a goal back for the hosts with a penalty of his own, 17 minutes from time, but the Dons were able to see out the remainder of the contest to secure a victory which sees them climb to 13th in the Sky Bet League One table.

Doncaster Rovers, meanwhile, played out an entertaining 2-2 draw with Gillingham as they picked up an important point in their promotion push.

It was the perfect start for The Gils as Jordan Graham fired his side ahead inside 85 seconds as he turned home from inside the box.

The lead was then doublled on four minutes as Vadanie Oliver volleyed home from Ryan Jackson's long throw for his eight goal in seven games.

Tom Anderson pulled his side back into the game with 20 minutes on the clock as he headed home from James Coppinger's cross.

The evergreen Coppinger then levelled the scoring on 23-minutes as he capitalised on poor defending to find the bottom corner.

FIGHTING TALK
Rusell Martin: "Doncaster are a good, established team. They play some good football and that’s been them, traditionally, for a long time. They have a new manager now but he’s been there a while. It will be a tough game but it’s one to look forward to. It should be a good football match."

Andy Butler: "If you look at MK Dons and their style of play - they've carried on this year - the manager has done an excellent job. People have asked for him to change his style, but he's stuck to his guns - it's working for them at the moment. It's our job to find a way to combat it and cause them problems. It'll be a tough game and a complete opposite test to Gillingham, MK Dons like to keep the ball, so we have to be ready out of possession to deal with it and exploit them out of possession."

TEAM NEWS
MK Dons have no fresh injury concerns heading into today's clash, with both Ethan Laird and Josh McEachran coming through the win over Burton Albion unscathed.

Doncaster Rovers' winger Josh Sims has returned to parent club Southampton to be assessed after suffering a reoccurrence of the injury which has blighted him in recent weeks.

Midfielder John Bostock is poised to return to the squad after missing recent matches due a groin injury but Jon Taylor is a doubt and Matt Smith will miss this afternoon as he is away on international duty with Wales.

OFFICIALS
Joshua Smith will be the man in the middle for today's game.

Mr Smith has overseen 14 matches so far this term, producing a total of 42 yellow cards. He has sent off two players and has awarded two penalties.

His assistant referees are Adrian Waters and Bhupinder Gill, while the fourth official is Rob Smith. 
Russell Martin lauded a ‘brilliant’ performance from his MK Dons side, as they made it four straight Sky Bet League One wins with a 1-0 triumph over Doncaster Rovers. Defender duo in League One Team of the Week


Harry Darling and Daniel Harvie have been named in Sky Bet League One’s Team of the Week. In a game that the Dons dominated with chances and possession, it took until the final quarter of an hour for them to make a breakthrough – Harvie, the match-winner, with a right-footed strike that beat the impressive Louis Jones in the Donny goal.

The win lifts Russell Martin’s men into the top half of the Sky Bet League One table with eight games left to play in the 2020/21 season.

Andrew Surman captained an MK Dons side that made three changes from the win at Burton Albion. In came Zak Jules, Will Grigg and Daniel Harvie in place of Dean Lewington, Cameron Jerome and Ethan Laird.

Harvie and his opposite wing-back, Matthew Sorinola, were both involved early, delivering crosses from the right and the left. The former also had the game’s first shot, on seven minutes – one from 20 yards out which was blocked.

Surman also tried his luck from distance, 19 minutes in, but he too saw his effort stopped by a Donny defender. The Dons then had an appeal for a penalty turned away by referee Joshua Smith, despite what appeared to be a handball from Harvie’s cross.

Louis Jones was forced into his first save in the 28th minute, producing a terrific stop to keep out Grigg’s goal-bound header. The Dons recycled possession and Jules had an opportunity which he dragged just past the post.

Martin was forced into his first change of the game on the half-hour mark as he replaced Scott Fraser with Louis Thompson in midfield.

The chances kept coming for the Dons, though, and they went agonisingly close to breaking the deadlock with six minutes remaining in the half but Jones denied Harvie with a terrific fingertip save, tipping the Scot’s low effort onto the post.

Grigg was denied on the follow-up and he saw another shot soon after – again, Jones, in the way for the visitors.

The Donny goalkeeper lost none of his inspired form at the break, as he came up with another excellent save just a minute into the second period – this time denying Thompson following his direct run forward from half-way to deep inside the penalty area.

Doncaster had their best opening of the game on 53 minutes when Jason Lokilo was played in by Omar Bogle. Harry Darling recovered well for the Dons and got in the way of the striker’s effort with a diving block. Lokilo then fired over the loose ball.

A vital block from Joe Wright at the other end prevented Sorinola from connecting with Harvie’s low cross. Grigg did get to O’Riley’s low delivery just prior to the hour mark but saw his poked effort claimed by Jones.

Doncaster had another try 63 minutes in from a direct free-kick but John Bostock sent his attempt over Fisher’s crossbar.

Martin went to his bench again soon after, adding Jerome to his attack alongside Grigg as well as Laird in place of Sorinola out wide. Jerome connected with a McEachran free-kick on 74 minutes but was flagged for offside.

The game was finely poised entering the final quarter of an hour but, it was at that point, the deadlock was broken – and, deservedly, in the Dons’ favour.

O’Riley created the goal with an excellent cross-field pass to Harvie, who manoeuvred himself into space for a shot before firing a fierce right-footed strike beyond past Jones and into the roof of his net. An excellent finish. 1-0.

Charlie Brown replaced Grigg as Martin made his final change of the game with less than eight minutes left to play. Fisher was called into action, for the first time, moments later to save from Lokilo in the final three minutes of regulation time.

Jerome had an opportunity in stoppage time to put the game to bed but wasn’t able to generate enough power on his shot to beat Jones from Laird’s cross.

Doncaster threatened late on, going closest with an effort that was somehow kept out on the line by Darling – who, on his knees, did well not to use his hand to block the goal-bound attempt.

The visitors then failed to take advantage from the resulting corner and that was followed by the referee’s whistle. A fourth straight MK Dons win for the first time since 2019 and one that certainly sets up an interesting finish to the 2020/21 season.


Russell Martin lauded a ‘brilliant’ performance from his MK Dons side, as they made it four straight Sky Bet League One wins with a 1-0 triumph over Doncaster Rovers.

Defender duo in League One Team of the Week


Harry Darling and Daniel Harvie have been named in Sky Bet League One’s Team of the Week. 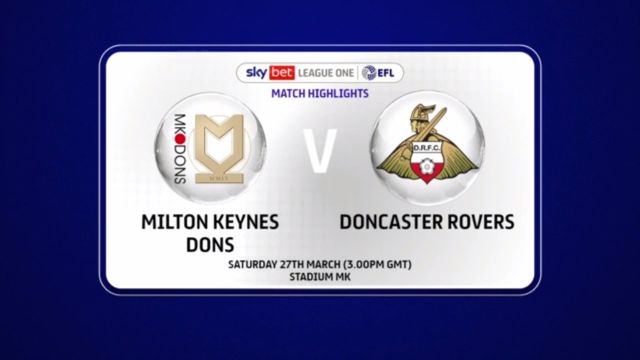 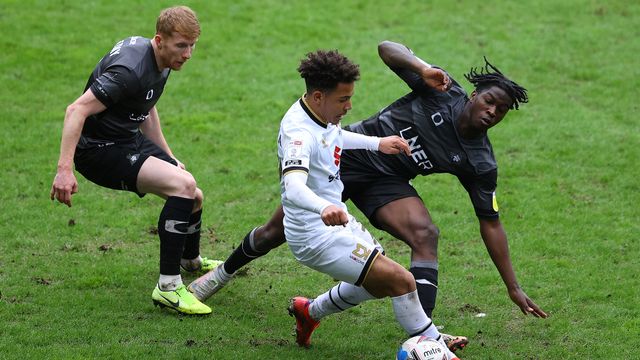