MK Dons fell to defeat in their first Sky Bet League One encounter of 2021, losing 3-0 to Peterborough United at the Weston Homes Stadium.

Promotion-chasing Posh ran up a two-goal lead inside the opening half an hour through Jonson Clarke-Harris and Sammie Szmodics.

Szmodics added a third Peterborough goal in the second half, to cap a disappointing afternoon for Russell Martin’s side, who stay 16th in the Sky Bet League One table, four points adrift of the top half.

Ethan Laird made his full MK Dons debut as one of four changes made by Russell Martin for the trip to Peterborough. Also coming in were Andrew Fisher, Ben Gladwin and Cameron Jerome in place of Lee Nicholls, Stephen Walker and Joe Mason. New signing Charlie Brown was amongst the substitutes for the Dons, as was Warren O’Hora, who returned from injury.

It was the home side who registered the first shot on goal, three minutes in. A Posh corner was cleared only as far as Jack Taylor, whose volley flew wide of Fisher’s left post.

A minute later, Regan Poole was forced into a vital tackle deep inside his own box to deny Siriki Dembele. Two minutes after that, Peterborough took the lead through Clarke-Harris, who got in front of Poole and Lewington from Joe Ward’s cross to stab past Fisher. 1-0.

The Dons were dealt a further blow shortly after, with Andrew Surman forced off the pitch through injury. Before Martin could make a chance, Posh almost doubled their lead but, fortunately, Dan Butler dragged his shot wide.

Mason was the eventual replacement and he won the Dons a corner with a quarter of an hour played. Gladwin’s delivery was met by Jerome at the far post but he wasn’t able to direct his shot on target.

The MK Dons number 20 was then brought down five yards from the edge of the box, providing Gladwin with a chance to try his luck from a free-kick – a free-kick which he hit with some power, but one that was deflected just wide of the post.

Mason was heavily involved early and he went close to pouncing on Laird’s header down on 23 minutes. The Dons were beginning to grow into the contest but, on the half-hour, they saw the deficit doubled – Szmodics latching onto a through pass before rounding Fisher and slotting into an empty net. 2-0.

Laird tried to make something for the Dons on 32 minutes, twisting and turning before beating his man down the right. He sent a looping cross into the box for Jerome, but the ball was headed clear by Frankie Kent.

MK Dons almost found a way back into the match with a minute to go in the first half but Poole’s drive from distance crashed against the crossbar. Mason pounced on the loose ball but wasn’t able to bring it under control and have a shot on the rebound.

Fraser also went close with a long-range first-half strike which he sent just wide from 20 yards out. He had the first attempt of the second half – this one, in the 51st minute, drew a save out of Pym.

The MK Dons number 10, after a driving run from half-way, then teed up Mason, whose right-footed shot was blocked. Gladwin also had a strike denied by the Posh defence, after receiving a quick free-kick, 25 yards from goal.

Peterborough were limiting the Dons to efforts from outside the area. Martin’s men had another try from distance on the hour – Sorinola with the effort, which sailed harmlessly over the crossbar. Fraser, too, with a low, trickling shot which Pym got down to.

Any hopes of a fightback, though, were all but gone with 25 minutes to play as Szmodics grabbed his second of the game, converting at close-range from Dembele’s low cross. 3-0.

The Dons brought on Lewis Johnson from the bench for the final half of the second period. Moments after his introduction, strike partner Jerome got behind the Peterborough backline, but he put too much on his attempted lob over Pym.

Brown entered the fray with a quarter of an hour left to play for his MK Dons debut, as did Jack Davies who made his first league appearance for the Club.

Sixteen-year-old Johnson went close to marking his third league outing of the season with a goal but he wasn’t able to get a good enough touch on Gladwin’s cross. Mason had half a chance on the rebound but was quickly crowded out.

Laird did well in the closing stages of regulation time to get to the by-line and cross but his ball was just too high for Johnson. Lewington, up from the back after a corner, couldn’t fashion a shot from the loose ball.

Sorinola had the Dons’ final opportunity to grab a consolation goal but failed to bring the ball under control after getting behind the Peterborough defence. That just about summed up MK Dons’ afternoon. 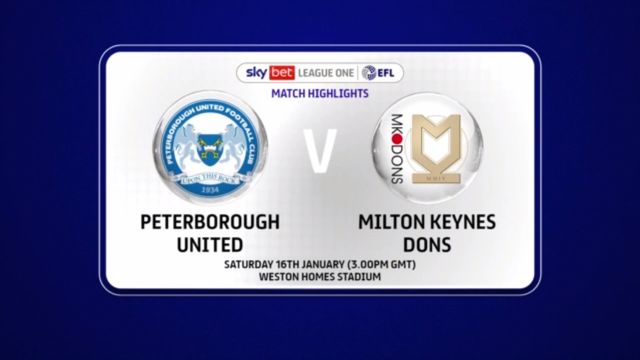 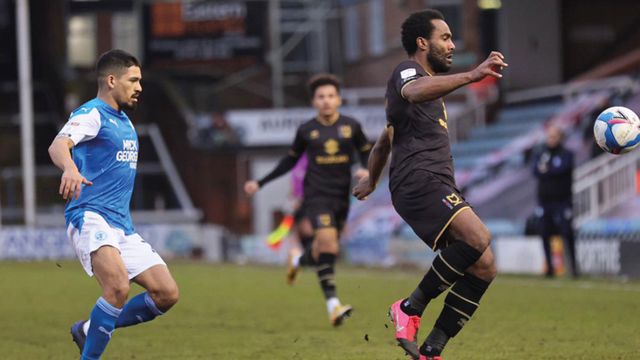