Russell Martin had mixed emotions after MK Dons’ 3-1 victory over Fleetwood Town – happy with the result, but disappointed with the way in which is side saw the game out. Dons trio included in Team of the Week


MK Dons had a trio of players feature in the Sky Bet League One Team of the Week, following Tuesday’s 3-1 victory over Fleetwood Town. 
At opposite ends of the pitch, Joe Mason and Andrew Fisher both played a crucial part in MK Dons’ 3-1 victory over Fleetwood Town at Stadium MK. Joe Mason scored a first-half hat-trick as MK Dons made it three Sky Bet League One wins in four games with a 3-1 victory over Fleetwood Town at Stadium MK.

Mason struck three times in the opening 27 minutes, becoming the first Dons player to record a hat-trick since Ryan Colclough scored a treble – against Fleetwood Town – back in September 2016.

Sam Finley reduced the deficit late in the second half for Fleetwood but Andrew Fisher pulled off a number of high-quality saves, as Russell Martin’s men held on to secure all three points – a result which lifts them up to 15th in Sky Bet League One, a point adrift of their opponents who lie 12th.

Boss Martin made two changes from the weekend defeat to Peterborough United, with Warren O’Hora returning from injury to replace Matthew Sorinola while Mason was handed a start in the absence of Andrew Surman, who limped out of Saturday’s game.

There was a moment of controversy early on when Josh Morris raced through on goal despite what appeared to be a clear offside in the build-up. The linesman had his flag up but play continued and Fisher, fortunately, was able to save the striker’s effort.

Referee Antony Coggins went against his assistant’s decision and awarded Fleetwood a corner, from which Fisher was forced into another good save – this one denying Callum Camps, who had struck well from distance. Those stops proved crucial as, a minute later, the Dons went ahead.

Ethan Laird intercepted Joe Hilton’s clearance and drove down the right flank before picking out Mason with a low ball into the box. The MK Dons number 20 took one touch to control before firing a shot across Hilton and into the far corner of the net. 1-0.

The Dons were forced into some defending on 10 minutes, with Fleetwood awarded a free-kick. Regan Poole, though, got up well at the near post to win the first contact and prevent Fisher from being troubled.

Martin's men then went close to a second shortly after, with Lasse Sorensen forcing Hilton into a diving save after terrific work from Harvie, and then Jerome, to set him up. Mason also had an opportunity before the quarter-hour mark to double his tally, but saw his shot deflected into the arms of the Fleetwood goalkeeper.

Camps had a half-chance for the visitors when he intercepted Fisher’s pass into the middle of the park, but the midfielder’s first-time effort rolled wide of the target.

The Dons, though, were in control and on 21 minutes they got the second goal their dominance deserved, courtesy of that man, Mason, again.

He did brilliantly, first, to win possession off Paul Coutts deep inside the Fleetwood half. Fraser then collected the loose ball but was dispossessed, though Mason was alert to pounce and then curl home his second of the evening beyond Hilton. 2-0.

Mason was certainly stealing the show and he marked an incredible first half an hour with a hat-trick goal.

The number 20 chased down Fleetwood defender Charlie Mulgrew and forced him into a mistake. Collecting the ball, Mason then moved in on goal and calmly slotted home his third past Hilton, becoming the first MK Dons player to score a hat-trick for almost four-and-a-half years. 3-0.

Sorensen threatened a fourth three minutes later but saw his low drive collected by Hilton. Laird also tried his luck, after cutting in from the right, but had his fierce strike blocked by a Fleetwood defender.

Jerome had a great opportunity to get on the scoresheet too, but fluffed his lines after being set up by Fraser inside the box. At the other end, Camps fired one on goal from distance but a crucial deflection from Laird took it over Fisher’s crossbar.

An excellent attacking move, heavily involving Gladwin, almost provided another chance on goal for the Dons but Harvie’s cutback was intercepted. Fleetwood had a late sniff at reducing the deficit before half-time in stoppage time, but Fisher claimed well inside his six-yard box.

Fleetwood had the first shot of the second half, with Morris testing Fisher from distance. Poole then produced an improvised clearance to prevent a dangerous looking cross from being converted at the far post.

The visitors really should have reduced the deficit in the 51st minute but Fisher, and then Lewington on the goal-line, kept out Vassell and Camps respectively. Half-time substitute Sam Finley later crashed a shot against the woodwork, as the Cod Army went close again.

Martin was forced into his first change with 12 minutes played in the second half - Laird, the man picking up an injury. He was replaced by Sorinola and the wing-back immediately went close to latching onto a pass from Fraser who, in turn, was denied one-on-one by Hilton just before the hour.

The Scot, evidently frustrated not to get on the scoresheet with that chance, had another go at goal with 63 minutes played but sent a left-footed drive wide from 20 yards.

Fisher was called into action again midway through the second half to keep out an attempt from Madden. Soon after, Martin made his second change of the game, replacing his hat-trick star Mason with 17-year-old Lewis Johnson.

Fleetwood had a further opportunity denied by Fisher with a quarter of an hour left to play, while Hilton came up with a terrific save of his own a minute later to prevent Sorensen finding the net from Fraser’s through pass. Hilton also denied Jerome a 10th goal of the season with a smart save at his near post.

The visiting side did pull a goal back with seven remaining through Finley, who found a way past Fisher from the edge of the D. 3-1.

The Dons stopper was to be called into action several more times to prevent a late Fleetwood fightback, with his saves to deny Camps and Shayden Morris particular standouts.

There were late run outs for John Freeman and Charlie Brown, as the Dons ultimately did enough to see out the game and add three important points to their tally.


Russell Martin had mixed emotions after MK Dons’ 3-1 victory over Fleetwood Town – happy with the result, but disappointed with the way in which is side saw the game out.

Dons trio included in Team of the Week


MK Dons had a trio of players feature in the Sky Bet League One Team of the Week, following Tuesday’s 3-1 victory over Fleetwood Town.


At opposite ends of the pitch, Joe Mason and Andrew Fisher both played a crucial part in MK Dons’ 3-1 victory over Fleetwood Town at Stadium MK. 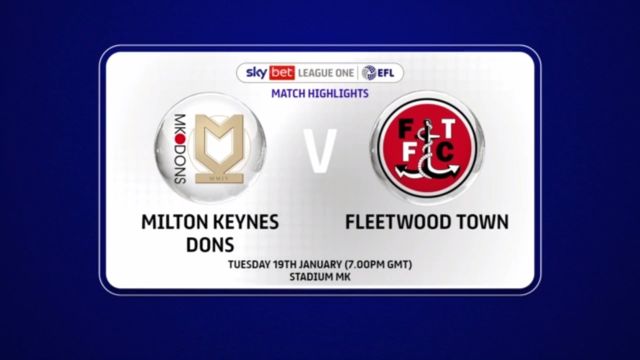 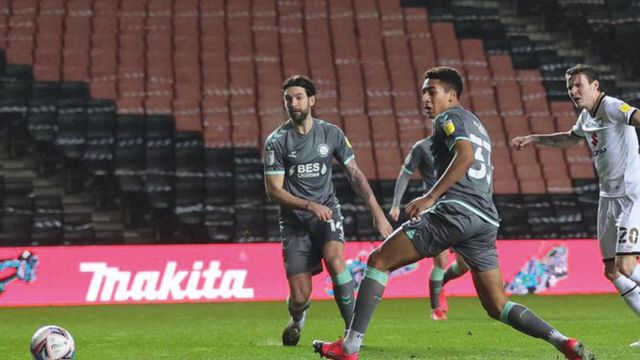