Russell Martin was pleased to be able to put smiles on faces of MK Dons supporters watching Saturday’s match with AFC Wimbledon from home. The win, the Dons’ fourth in six matches, sees Russell Martin’s men move nine points clear of danger in Sky Bet League One, and to within the distance of the play-off places.

Martin made one change from Tuesday's defeat to Charlton Athletic, with Louis Thompson replacing Ben Gladwin in midfield. Meanwhile, John Freeman came on to the bench to take the spot of Regan Poole, who departed for Lincoln City on Saturday morning.

There was an early opportunity for AFC Wimbledon, with Andrew Fisher forced into a diving save to direct an effort from Nesta Guinness-Walker wide of goal.

Fisher was called into action again on seven minutes, when Jack Rudoni’s cross turned into a shot on goal – the MK Dons goalkeeper managed to get back to his near post in time to save.

The Dons had their first foray forward with nine minutes on the clock. Scott Fraser latched onto a through pass and delivered a low cross which was turned behind. From the corner, Harry Darling went agonisingly close to connecting with Thompson’s deflected effort, six yards out.

Thompson had a driving run forward shortly after but was dispossessed after reaching the penalty area. Fraser did manage to get a shot away after a later dribble through the middle, but saw his left-footed drive blocked.

On 23 minutes, Martin’s men found themselves in again through Jerome, who latched onto a through pass forward and then found Mason, who wasn’t able to fashion room for a shot inside the area. At the other end, Fisher made a routine save to deny Ryan Longman.

Darling, who was having another solid outing in the heart of the Dons defence, got across well to block Joe Piggott’s 29th-minute attempt. Martin’s side just about scrambled away the corner.

The Dons went straight back on the attack and won a free-kick from which O’Riley had a left-footed strike blocked. Laird did similar to deny Rudoni a minute later.

Jerome was almost gifted an opener five minutes before half-time but, after pouncing on a weak backpass, couldn’t get the ball fully under control and Sam Walker was able to gather. That was the final chance either team had to break the deadlock before the interval.

The MK Dons striker was involved early in the second half, beating the offside trap before cutting a ball back for Mason, whose effort was blocked. A minute later, he raced onto O’Riley’s pass but had a right-footed shot saved by Walker.

Mason had another effort blocked, this time from Laird’s cross, with 12 minutes played in the half. The Dons then made their first two changes of the game, with Gladwin and Matthew Sorinola replacing Thompson and Daniel Harvie.

The Dons were starting to take full control and on the hour-mark, they edged in front. Lewington started the move with an interception on half-way - Jerome collected his pass. The striker then played a one-two with Fraser before delivering a low ball into the box into the path of the on-rushing O’Riley, who only needed only touch to fire home his first MK Dons goal and put his side ahead. 0-1.

Within an instant, Martin's men doubled their advantage - Sorinola the man, off the bench, scoring his first league goal for the Club.

After some good football through the middle, the Academy graduate collected a pass from Jerome, before cutting into his right foot and firing a fierce strike towards goal. The effort took a nick off Rudoni, which did enough to take it over Walker and onto both posts before it nestled in the back of the net. 0-2.

The Dons controlled proceedings from there, and even went close to adding a third with 15 minutes to play – Laird, cutting in from the right, dragged a shot wide of the post.

Lasse Sorensen replaced goalscorer O’Riley for the final quarter of an hour while Brown came off the bench for Mason, with seven minutes left to play.

They both played their part as Martin’s side rode out the closing stages with relative ease, securing a big three points ahead of two meetings with Sunderland in the Papa John’s Trophy and Sky Bet League One respectively.


Russell Martin was pleased to be able to put smiles on faces of MK Dons supporters watching Saturday’s match with AFC Wimbledon from home. 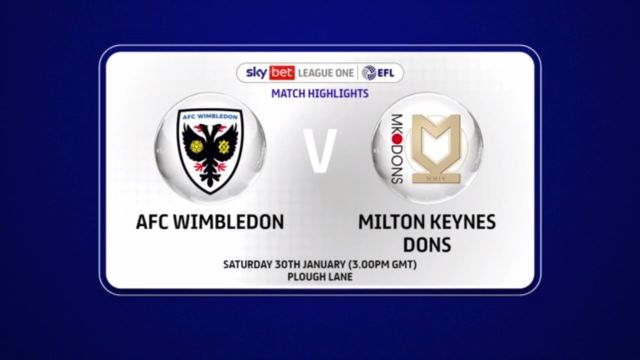 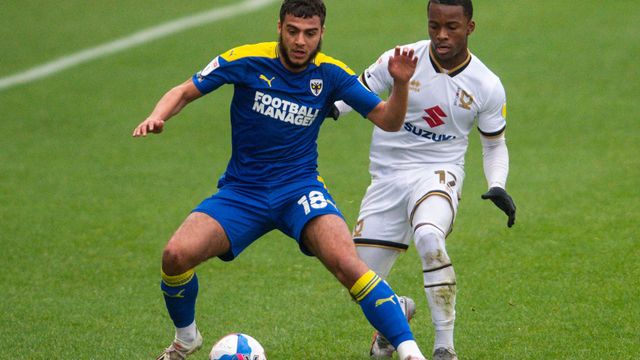