MK Dons take on Sunderland tonight in the quarter-finals of the Papa John's Trophy.

The two sides go head-to-head with a place in the Last 4 of the competition on offer, and the chance to move to within one game of a Wembley Final.

Russell Martin's men secured their quarter-final spot with a 2-0 win away at Northampton Town in the Round of 16, having previously seen off Norwich City Under-21s 6-0 at Stadium MK.

A victory tonight would see the Club tie their second-best run in this competition. Having previously won the competition in 2008, the Dons also reached the semi-final stage in 2010.

The tie must be settled this evening and therefore if the scores are level after 90 minutes, a penalty shoot-out will follow.

THE OPPOSITION
Sunderland reached the knockout stages of the Papa John's Trophy as Group A runners-up but are one of the leading scorers in the competition with 18 goals to their name from their five matches so far.

The Black Cats, currently sixth in Sky Bet League One, are in good form, having lost just one of their last 11 matches in all competitions - a run which has seen them pick up six victories and keep six clean sheets.

Lee Johnson has led he revival since being appointed manager back in December 2020. He has also managed to add to his squad this month, signing Carl Winchester from Forest Green Rovers as well as Ross County striker Ross Stewart.

Stewart joins a strikeforce that is led by Charlie Wyke, who has 15 goals to his name this season. Chris Maguire, Grant Leadbitter and Aiden McGeady are other goal threats.

Sunderland, meanwhile, were involved in a 2-2 thriller against Gillingham.

Aiden McGeady opened the scoring just six minutes into the encounter, however, Alex MacDonald would level with 28-minutes gone.

The first-half scoring wasn't done there, Grant Leadbitter netted in the 43rd minute to ensure Lee Johnson's side were ahead at the break.

Gillingham, however, found an injury-time equaliser through Jordan Graham to ensure the points were shared at the Stadium of Light.

TEAM NEWS
MK Dons have no fresh injury concerns heading into tonight's clash with Sunderland but do have a number of players out due to ineligibility.

Charlie Brown, Ethan Laird, Harry Darling and Deadline Day signing Zak Jules are all cup-tied having played in this season's competition for the former/parent clubs, while Will Grigg can't feature due to the terms of his loan deal from Sunderland.

Sunderland will be without defender Bailey Wright, who is sidelined through concussion.

Denver Hume and Conor McLaughlin are out for an extended period after undergoing hernia surgery while Carl Winchester is cup-tied, but fellow January signing Ross Stewart could make his debut following his move from Ross County.

OFFICIALS
Thomas Bramall will be the man in the middle this evening.

Mr Bramall has overseen 18 matches so far this term, producing a total of 40 yellow cards. He has sent two players off and awarded three penalties.

His assistant referees are Grant Taylor and Michael Chard, while the fourth official is John Busby.


Louis Thompson wants MK Dons to put things right this Saturday, when they welcome Sunderland back to Stadium MK.

Russ: We were well in the tie until the final 15


Russell Martin doesn’t want a disappointing last quarter of an hour to influence his view on Tuesday’s performance against Sunderland.

MK Dons' Papa John's Trophy run came to an end as Sunderland put three past a youthful Dons side.

The visitors went ahead in unfortante fashion as Diamond's cross took a deflection off Dean Lewington before wrongfooting Lee Nicholls.

The Dons dominated large spells of the second-half, however, two quick-fire Sunderland goals from Aiden McGready and Charlie Wyke took the sting out the tie as The Black Cats progressed into the Semi-Final.

Russell Martin made four changes from Saturday's win over AFC Wimbledon, with 17-year-old Lewis Johnson handed his second start of the season.

Lee Nicholls, Lasse Sorensen and Matthew Sorinola also came into the side, while there was a place on the bench for first-year scholar Charlie Smith.

After an opening five-minutes where both sides exchanged possession, it was the visitors who had the first chance of the game. Aiden O'Brien was on the end of Lynden Gooch's pass, but his effort hit the side netting.

At the other end, Harvie flicked a cross into the path of Mason - his effort was blocked by Tom Flanagan.

The breakthrough came for Sunderland with 12-minutes on the clock as an unfortunate deflection off Dean Lewington founds its way past Lee Nicholls. To their credit, it was an explosive counter attack from Lee Johnson's side - with Diamond's cross finding the touch off Lewington. 0-1.

The Dons looked for an immediate reply through Joe Mason who was on the end of Fraser's deflected effort. Remi Matthews was equal to his strike and was also on hand to smoother any rebounds.

Sorinola won then won the ball inside Sunderland's as the Dons looked to level proceedings before the break. He switched play to Harvie who found the run of Joe Mason with his driven cross. The striker met the delivery with perfect timing but was unable to keep his effort down.

The equaliser looked as if it would fall with the first-half drawing to a close. Mason played a clever flick into the path of Johnson and after the youngster beat his man looked for the run of Fraser. He was denied a tap-in by a last-ditch tackle from O'Nein meaning Sunderland led at the break.

With no changes for either side at the break, the second half was underway, and it was Martin's side who had the first chance of the half. Lewis Johnson found himself on the end of Fraser's pass - his dangerous cross was met by Matthews.

Fraser, who was coming into his own, then evaded two defenders before threading in Mason. His shot across goal was once again saved by Matthews.

Sorinola then almost netted his second in as many games as the Academy Graduate dropped a should to cut inside and create room for a shot. His curling strike took a deflected and ended narrowly wide of the post.

Nicholls was then called into action twice within quick succession. Firstly, he turned behind from Neil's strike before claiming the resulting corner.

Matthews proved to be the thorn in the side of MK Dons as he pulled off yet another impressive save. The chance was created after another free-flowing move involving Jerome, Mason and Fraser. The Scot played a clever one-two with Jerome before firing across goal - Matthews was down quickly to deny.

Having soaked up the pressure, Sunderland soon doubled their advantage through substitute Aiden McGeady. The experienced winger was on the end of Sorensen's clearance, and after taking a touch to set himself, his driven effort found the back of the net. 0-2.

The two sides meet again this Saturday with three points on the line.


Louis Thompson wants MK Dons to put things right this Saturday, when they welcome Sunderland back to Stadium MK.

Russ: We were well in the tie until the final 15


Russell Martin doesn’t want a disappointing last quarter of an hour to influence his view on Tuesday’s performance against Sunderland. 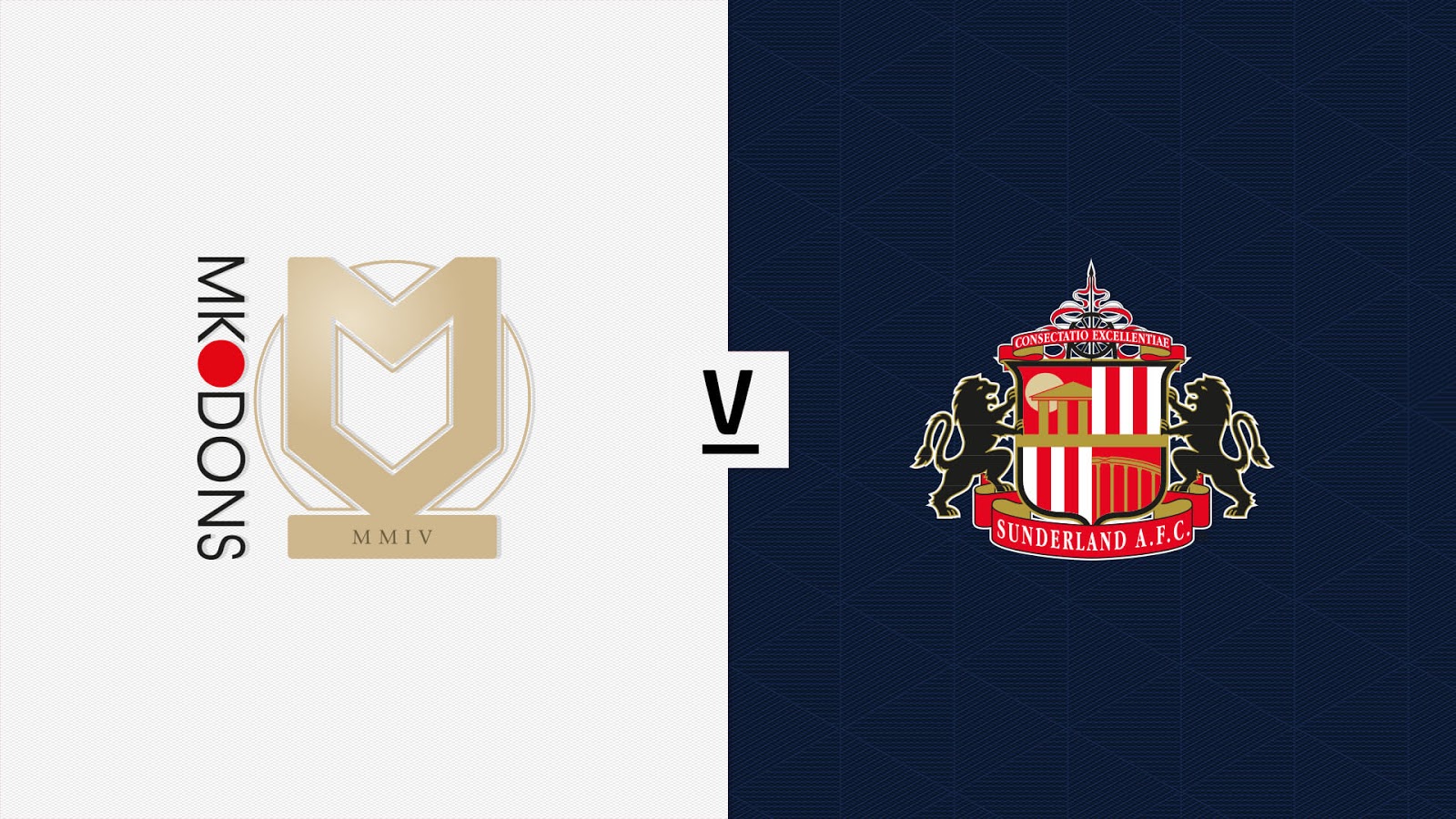 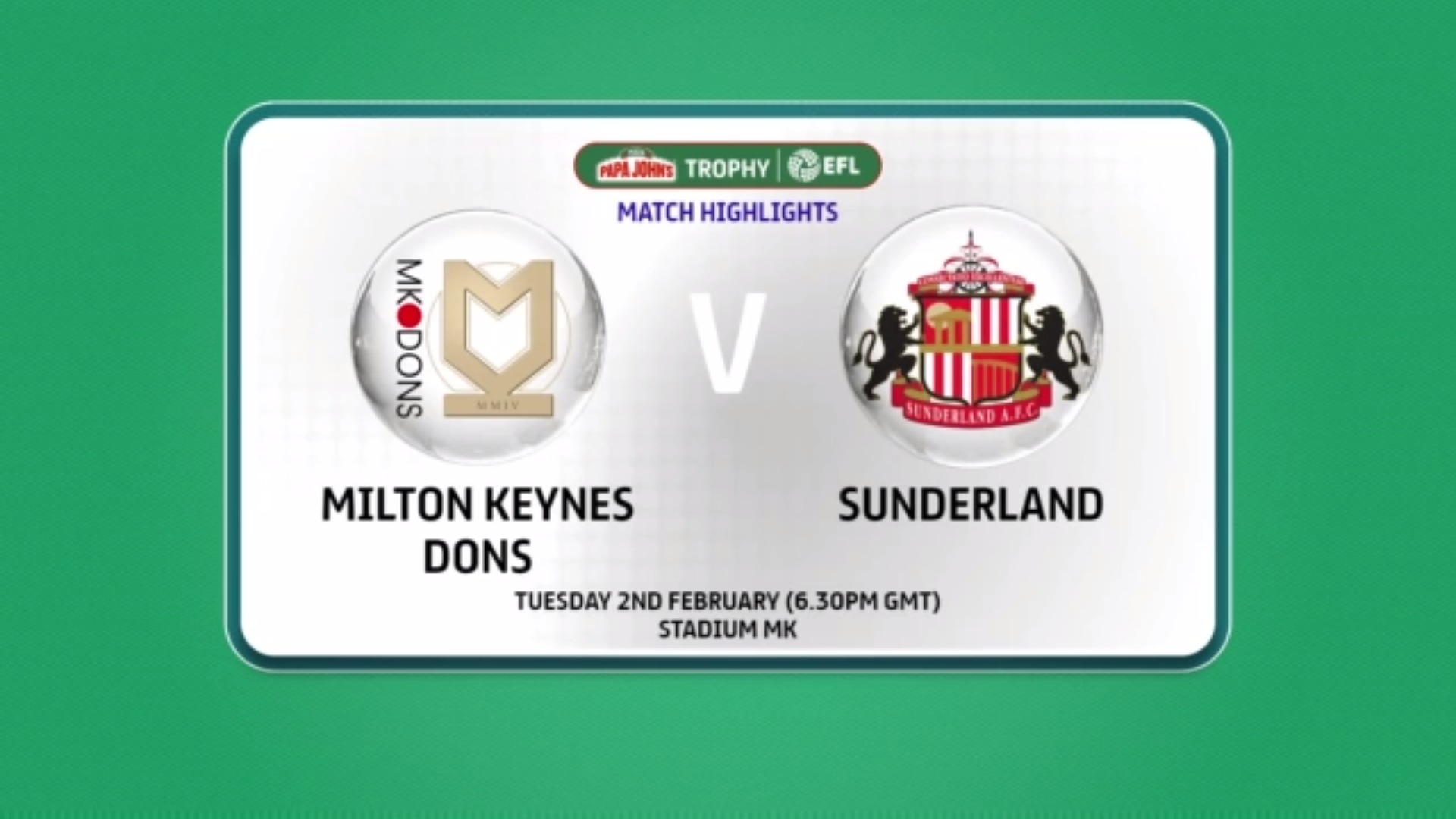 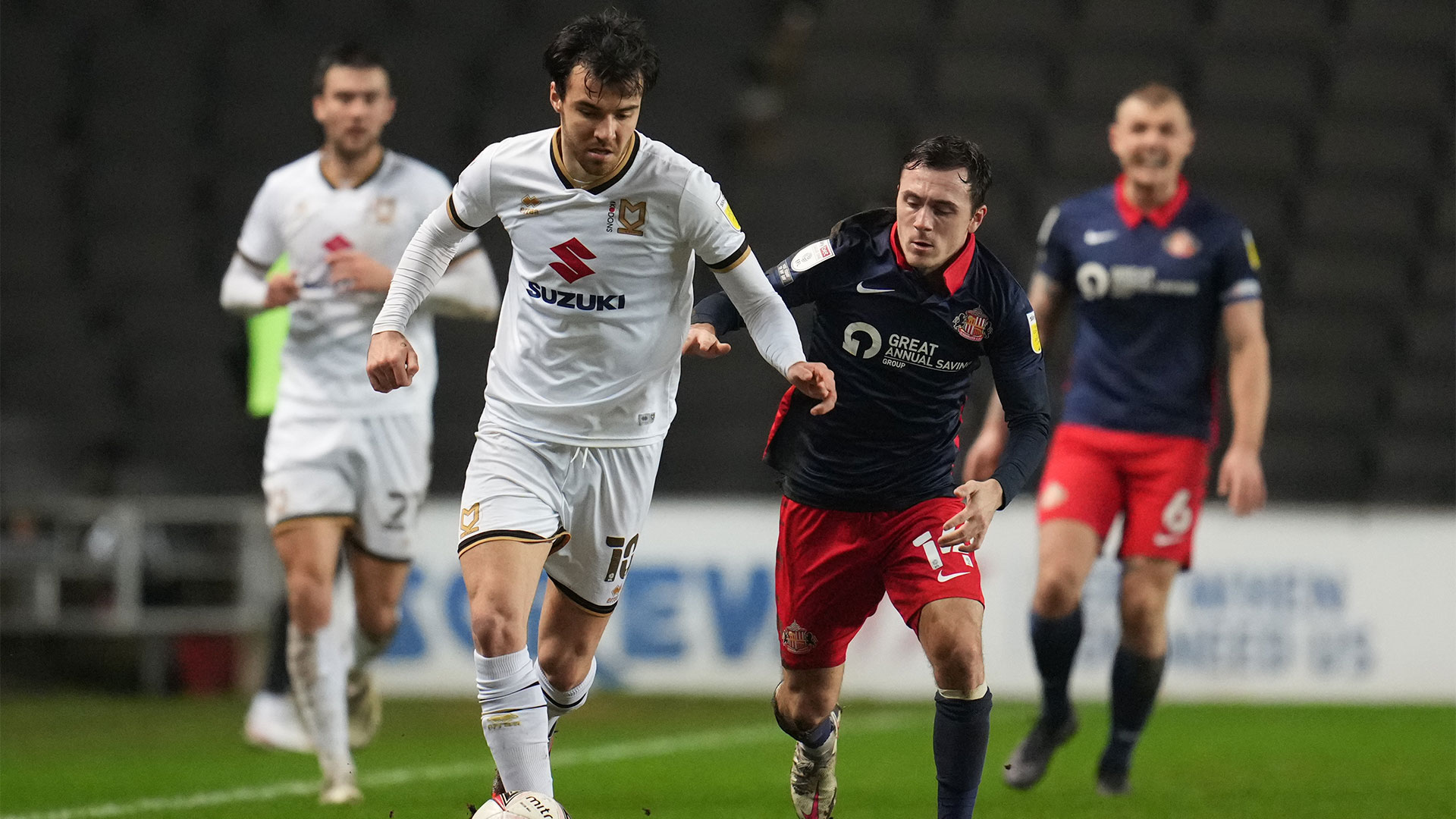