Russ: We got away with one


Russell Martin admitted MK Dons ‘got away with one’ on Saturday but praised the character of his side to find a route to victory. Surs in Team of the Week after Cobblers strike


Andrew Surman has been named in Sky Bet League One’s Team of the Week following his goal-scoring performance in the 4-3 win over Northampton Town. Charlie Brown scored an 88th-minute winner to secure all three points for MK Dons in a seven-goal thriller with Northampton Town at Stadium MK.

Northampton took the lead less than two minutes in but Russell Martin's men held the advantage at the break thanks to goals from Andrew Surman and Will Grigg – the former’s maiden strike in a Dons shirt and the latter’s first since returning to the Club.

Former Dons Ryan Watson and Peter Kioso turned things around in favour of the visitors, who led with 12 minutes to play, but it was the the Dons who would walk away with all three points in dramatic style.

Substitute Cameron Jerome volleyed past Jonathan Mitchell to make it 3-3, before Charlie Brown turned home his first league goal from Daniel Harvie’s cross to secure a memorable victory for the Dons, who climbed to 11th in the Sky Bet League One table.

Martin named an unchanged starting XI from the 1-0 win away at Hull City, while Cameron Jerome returned from illness to take John Freeman’s spot on the bench.

His side made the worst possible start in their bid to secure a third successive win, falling behind after only 80 seconds when Fraser Horsfall, unmarked at the far post, converted from a deep Mark Marshall free-kick. 0-1.

The Dons soon sparked into life and a through ball from Ethan Laird was almost perfect for Joe Mason, but the ball ran through into the grateful clutches of Jonathan Mitchell.

Matt O’Riley then won a free-kick, from which Harry Darling had an effort on goal blocked. The Dons recycled possession, though, and eventually levelled the scores – and in some style.

O’Riley beat his man on the left edge of the area and crossed to the near post. Kioso headed it clear for the visitors but only as far as Surman, who sent an unstoppable volley past Mitchell from 18-yards out. 1-1.

Northampton responded well from kick-off and forced the Dons into a mistake deep inside their own half – fortunately for Martin’s side, Rose miss-fired with the goal at his mercy. Rose had another chance, three minutes later, which Fisher saved.

The Cobblers went close again through Marshall, who hit the inside of the post with a low drive from distance. The Dons then broke forward with Laird, whose effort across goal was intercepted by a Northampton defender.

Martin wouldn’t have been happy with his side’s display in the opening half an hour but with 35 minutes on the clock, he saw his side complete a first-half comeback and take the lead.

O’Riley was involved again, intercepting a pass midway inside the Northampton half which allowed Mason to collect. He then slid in Grigg, who cut back onto his right foot and calmly slotted home his first goal back in an MK Dons shirt. 2-1.

The Dons almost doubled their advantage immediately after the re-start but Fraser, after winning the ball on half-way and driving into the box, fired over with a fierce left-footed shot.

Mason had one final chance to double the advantage before the break but saw his shot on the turn saved by Mitchell.

Northampton made a double change at the break, with former Don Ryan Watson one of the two additions to their side. He made an instant impact for the visitors too – beating Fisher from a tight-angle with a left-footed equaliser, less than a minute into the second half. 2-2.

Fisher prevented the Cobblers from restoring their lead with a fine save to deny Marshall on 53 minutes. From the resulting corner, Lloyd Jones headed just wide. Watson then threatened again with a first-time effort from the edge of the box which he sent over the bar.

The Dons’ first chance of the second half came with an hour played – O’Riley with a strike from 25-yards which was kept out by a diving Mitchell. That was his final involvement, as he was soon one of two withdrawn by Martin to make room for Ben Gladwin and Jerome.

Northampton saw Ryan Edmondson strike the outside of the post with 20 minutes to go, after he had beaten the offside trap. Eight minutes later, the Cobblers would get a third goal through Kioso - the ex-MK Dons Academy product headed past Fisher from another well-taken free-kick. 2-3.

The scoring was far from finished, though, as the Dons levelled once again on 83 minutes, with two of their substitutes combining well.

Gladwin sent a looping ball forward in the direction of Jerome, who did brilliantly to get goalside of his man, and also hold him off, before striking, right-footed, past the rooted Marshall. 3-3.

Was there to be one final goal in a thrilling Stadium MK encounter and it fell the way of the Dons with just two minutes left on the clock.

A quickly-taken free-kick allowed Harvie the freedom of the left flank and his cross was inch-perfect for Brown, who beat Mitchell to the ball and slotted home his first professional goal to seal a dramatic win. 4-3.

Russ: We got away with one


Russell Martin admitted MK Dons ‘got away with one’ on Saturday but praised the character of his side to find a route to victory.

Surs in Team of the Week after Cobblers strike


Andrew Surman has been named in Sky Bet League One’s Team of the Week following his goal-scoring performance in the 4-3 win over Northampton Town. 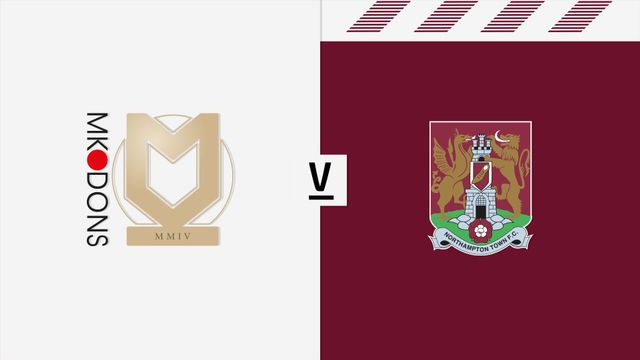 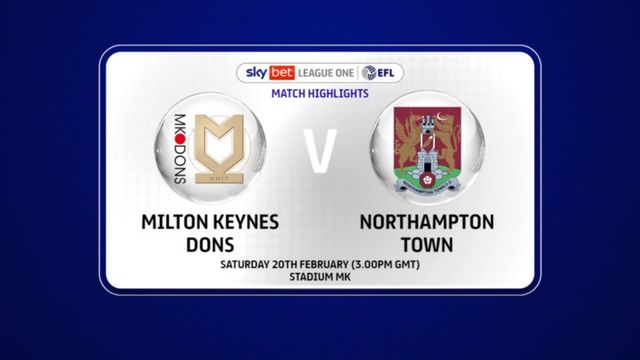 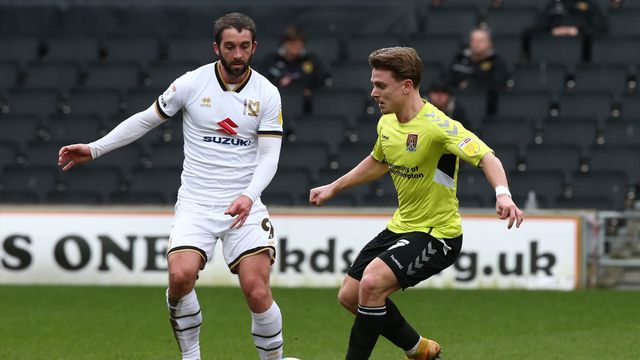