MK Dons netted six goals in a dazzling display as they progressed into the Papa John's Trophy Round of 16, in front of supporters at Stadium MK.

Fans were back in Stadium MK for the first time in over 277 days and they were rewarded with a dominant Dons performance.

Kieran Agard netted his first goal of the season to give Russell Martin's side a first-half lead, before Lasse Sorensen and Stephen Walker found the back of the net in the second along with Regan Poole, who scored a brace.

Russell Martin made nine changes from the side that faced Accrington Stanley in Sky Bet League One just three days prior with both Matthew Sorinola and David Kasumu retaining their place.

Lee Nicholls was back between the stick, with George Williams, Regan Poole, Baily Cargill, Daniel Harvie and Sorinola making up the defence ahead of him.

Kasumu was alongside fellow Academy Graduate John Freeman in midfield with Lasse completing the trio.

Kieran Agard was handed his first start of the season as he partnered Stephen Walker a the top end of the pitch.

The first chance of the game fell the way of MK Dons as Sorinola found himself with space on the left. His low crossed looked to have picked out the run of Walker, however, Norwich defended in their numbers to clear.

At the other end of the pitch, Ethan Vaughan tried to catch Lee Nicholls off guard, but his cross-come-shot ended over the bar.

It wasn’t just danger down the left from MK Dons, Regan Poole was lively during the opening 10-minutes and could’ve had an assist – McCracken was on hand to deny Agard’s header.

Freeman then looked to pick out the run of Agard after a clever one-two between the duo, McCracken was alert and off his line quickly.

It was then Walker’s turn to be denied by the opposition's defence, Sorinola’s deep cross picked out the run of Poole who headed back into the path of Sorensen. The Dane cleverly found Walker, whose shot was blocked.

Sorinola was then presented with the best chance of the game as he pounced on a loose pass on the edge of Norwich’s box. Having taken a touch to set himself, the youngster fired narrowly wide.

Having dominated large spells of the first-half the Dons were rewarded with the breakthrough with 34-minutes on the clock. Poole beat his defender on the right before finding Harvie in space at the top of the box. His cross as met by Agard, whose delicate header found the back of the net. 1-0.

It could’ve been two just seconds later as both Agard and Sorensen had efforts blocked on the line after some incredible last-ditch defending from Norwich City.

Agard was once again involved as he met Sorinola’s cross, but he was unable to test McCracken.

The Dons continued to dominate the closing stages of the first-half as Walker went close, with his left-footed strike ending narrowly wide of the near post.

The final chance of the game fell to that man Walker, he was found by Kasumu’s terrific pass, but was unable to find a way past McCracken.

With the Dons unchanged at the break they almost had the lead within 90-seconds of the restart, however, no one was on hand to turn home Sorinola’s cross.

It was a cross from the right that created the Dons next chance of the game, Poole was found by Kasumu who saw his low delivery cleared with Agard waiting at the back post.

It didn't take much longer for the Dons to find their second of the evening - and it came in spectacular fashion. Freeman won back possession in the final third before picking out Sorensen. The midfielder played a smart one-two with Walker before chopping onto his right. With no right to shoot, the Dane curled past McCracken and into the far corner for the first professional goal of his career. 2-0.

Just four minutes later, Sorensen capped off a superb display as he turned provider for the Dons third goal of the evening. His free-kick found the run of Poole who headed home for his second of the season. 3-0.

Unlike the weather, the goals didn't dry up there as Stephen Walker netted a fourth for Russell Martin's side. After Sorensen found Sorinola from a short corner, the defender picked out the run of Walker who smashed home from inside the box. 4-0.

The Dons continued to show a relentless attitude and bagged a fifth after a stunning free-flowing move. Walker freed Poole on the right, who took one touch before delivering low into the box. Meeting his cross was the run of Agard, who slotted into an empty net. 5-0.

Lewis Johnson could've capped off a perfect evening for the Dons as his header was tipped over the bar acrobatically by McCracken. The Dons, however, found their sixth of the evening from the resulting corner as Poole prodded home from six-yards. 6-0.

Nicholls, despite not being called into action during the second-half, produced a great save to his right to keep his clean sheet. He denied Rowe before confidently claiming the corner. 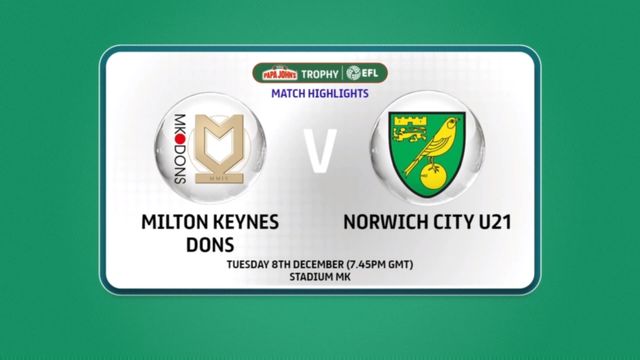 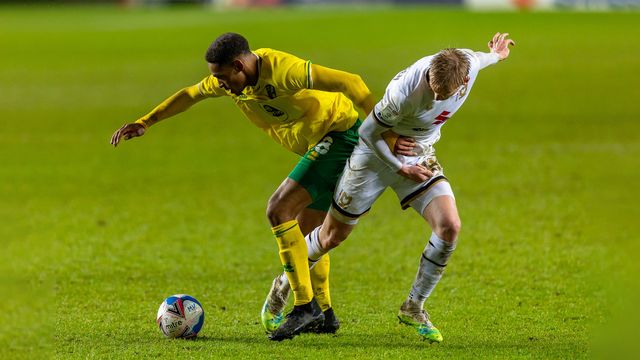