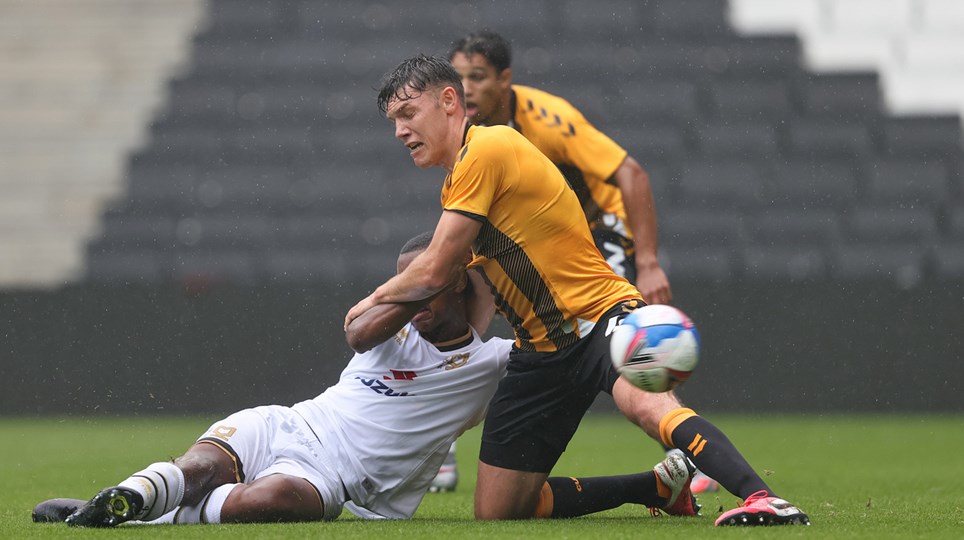 MK Dons returned to action for the first time in 163 days, playing out an entertaining practice match with Cambridge United behind-closed-doors at Stadium MK.

For the first time since their Sky Bet League One fixture with Doncaster Rovers on 7 March, Russell Martin’s men were back at Stadium MK once again, with a game that provided a chance for the majority of the squad to get 45 minutes under their belts.

In terms of the scoreline, Cambridge United edged out the first half but second-year scholar Tali Jallow ensured the Dons ended with a share of the spoils, finding the net with two excellent finishes.

Martin’s first-half XI was largely made up of of the Dons' senior squad, with the exception of Sam Nombe, who featured in the second half team and, amongst others, Richard Keogh and George Williams, who both missed out through injury.

The team did include summer signing Daniel Harvie and the returning Carlton Morris and Ben Gladwin. The latter two were involved early as the Dons worked their way into the Cambridge penalty area inside the opening 60 seconds. Their attack resulted in a corner, which was punched clear by U’s stopper Dimitar Mitov, who would go on to have a starring role in the first 45.

The first of Mitov’s many saves came on five minutes, when he gathered a headed effort from Rhys Healey, following Harvie’s left-wing cross.

Martin’s men enjoyed most of the early possession but it was their visitors who would break the deadlock. A quick free-kick, taken by Wes Hoolahan, was lathed onto by Harvie Knibbs and he did well to convert his chance from a tight angle.

Healey had a chance to restore parity less than five minutes later with a free-kick, which he won 10 yards outside the box. His curling effort, though, was pushed away by Mitov, diving to his right.

Gladwin then tried his luck with a long-range bending effort which flew just over the crossbar. Mitov was then beaten but had a defender to thank for hooking clear Morris’ goal-bound header.

The Dons’ summer recruits were impressing, in particular Harvie, who showed great skill to beat a man down the left before picking out Healey with an inch-perfect cross. The MK Dons number 10 struck first time, but saw his effort palmed away.

Mitov saved his best save for last, though. With eight minutes left in the half, the Bulgarian produced a point-blank stop to divert Gladwin’s strike from nestling into the net.

It meant, the Dons headed in for the half-time break a goal down and when the second half resumed, there were 11 new faces on the pitch – mostly scholars but with Sam Nombe leading the line and goalkeeper Laurie Walker between the sticks.

It was second-year scholar Jallow, though, who would quickly grab the headlines, as he netted twice in the space of seven minutes to overturn the deficit – and in some style too!

First, after Tom Rowley did brilliantly to keep the ball in play, the attacker collected a defensive clearance on his knee, and sent a looping 30-yard shot over U’s keeper Callum Burton and into the net off the crossbar.

Then, he showed great strength in the penalty area to hold off his man and send Rowley’s driven cross into the top right-hand corner with a terrific side volley. A terrific seven-minute spell for the young Don.

U’s responded after the re-start and quickly threatened an equaliser. Walker, though, was in inspired form and produced two diving stops to keep out the visitors, although they eventually found a way through with seven minutes to play.

The Dons goalkeeper did well to deny Andy Dallas at the first attempt but was helpless to the follow-up, which the Scot converted into the roof of the net.

Dallas had one final chance to win the game for Cambridge late on but Walker watched it bounce wide, as Martin’s Dons begin the 2020/21 pre-season, not with a win, but with plenty of positives to build upon, with three weeks to go.