After a disappointing defeat at Lincoln City in midweek, MK Dons have the chance to respond this lunchtime when they take on Portsmouth at Stadium MK.

Russell Martin’s men were in control of Tuesday’s contest up until an 11-minute hat-trick from Brennan Johnson put the match out of reach.

The Dons have bounced back well to defeats this season, only losing successive games on three occasions. They will look to channel that character again to put right some of the wrongs from midweek.

MK Dons’ form since the turn of the year has afforded them the luxury of not having to look too seriously over their shoulder, but they have an opportunity, today, to confirm their Sky Bet League One status once and for all.

A point will be enough for Russell Martin’s men, who are currently 15 points clear of Northampton Town with 15 points left to play for.

THE OPPOSITION
Portsmouth currently sit sixth in the Sky Bet League One table as they look to secure a play-off finish. Pompey are three points ahead of Oxford United but do have a game in hand on Karl Robinson's side.

They are one of the top scorers in the division having netted 57 goals in their 40 games this season, however, they have conceded the most out of any side in the play-off places with 42.

Lincoln appointed Danny and Nicky Cowley in March 2021, and have been in impressive form since his appointment at Fratton Park. The Cowley's guided Portsmouth to four successive Sky Bet League One wins in their opening four games. They recorded wins over Ipswich Town, Shrewsbury Town, Rochdale and Wigan Athletic respectively.

In their last two outings, Portsmouth have fell to a 2-1 defeat against Burton Albion and shared the spoils with Crewe Alexandra.

John Marquis leads their goalscoring charts with 15 goals to his name this season and has shown the other side of his game with five assists. Ronan Curtis finds himself in second with nine goals, with Marcus Harness and Tom Naylor are third with eight goals.

The striker was left to rue his miss as Danny Cowley's side had to settle for a share of the spoils against a Crewe team picking up their first home point in four games.

FIGHTING TALK
Russell Martin: "Portsmouth and the Cowley’s are two I have a lot of respect for. A lot of people feel they were unfortunate to lose their job at Huddersfield – they’ve done a good job wherever they’ve been. You know what you’ll get as they are a team full of intensity.

"It’s no surprise to see their results because they are a big club for this level and have a great squad."

Danny Cowley: “I’ve seen a lot of MK Dons and they’ve been a really good watch, so it’s a game that we’re really excited about. We’re looking forward to the challenge and someone told me they have one of the best possession records in Europe, which is pretty impressive.

“Credit to Russell Martin and his group because they’ve got a clear identity and we’ve got a real respect for them.”

Louis Thompson and Cameron Jerome both remain doubts, while Ben Gladwin, Kieran Agard and Jay Bird remain on the sidelines.

OFFICIALS
Martin Coy will be the man in the middle this lunchtime.

Mr Coy has overseen 26 matches so far this term, producing a total of 64 yellow cards. He has sent off three players and has awarded five penalties.

His assistant referees are Nicholas Cooper and Stephen Finch, while the fourth official is Scott Williams. Boss pleased as Dons bounce back


Russell Martin called for a response from his MK Dons side and got one, as they bounced back from their midweek defeat to Lincoln City by beating Portsmouth at Stadium MK. The win – the ninth at home this season – lifts Russell Martin’s men back into the top half of Sky Bet League One. They sit 12th with four games left to play in the 2020/21 season.

David Kasumu was handed his first start since December as MK Dons made one change from the midweek defeat to Lincoln City. Meanwhile, Jay Bird was back in the squad for the first time in five months, as Daniel Harvie, who suffered an injury in training, missed out.

There wasn’t much in the way of goal-mouth action until the ninth minute when Ronan Curtis fired straight at Andrew Fisher from 20 yards out.

The Dons then went close through Matt O’Riley, whose bending effort from the edge of the area crashed against the far post. Andrew Surman had a chance on the follow-up, but sent his left-footed curler just over the bar.

O’Riley had another opportunity on the quarter-hour mark but headed wide when well-placed from Scott Fraser’s cross. Moments later, at the other end of the pitch, Fisher produced a stunning reflex save to keep out John Marquis’ overhead kick.

On the half hour, the Dons were then aggrieved not to have been given a penalty for what appeared to be a foul on Grigg as he attempted to convert a Laird cross. Despite the clear infringement, referee Martin Coy opted against a spot-kick – and instead booked Dean Lewington for dissent.

Curtis almost compounded the frustration but, twice, he failed to find the net from the edge of the box- his first effort clipped the outside of the far post and the second was saved by Fisher.

With six minutes left to play in the first half, Surman shot wide direct from a 20-yard free-kick, won for a foul on Laird.

Laird was brought down again, a minute later, but this time inside the penalty area and provided Fraser with the opportunity to open the scoring from the penalty spot – which, of course, he took, sending Craig MacGillivray the wrong way from 12-yards. 1-0.

A superb tackle from Harry Darling prevented Marquis from equalising in first-half stoppage time. The Dons then went agonisingly close to doubling their lead through Grigg, who was twice denied by goal-line blocks, before Marquis had another first-half effort which was deflected over the bar by the body of Lewington.

Within the first three minutes of the second period, both sides hit the crossbar. First, Fraser fired a left-footed volley against the woodwork from Grigg’s set-up, then Portsmouth’s Tom Naylor saw his header hit the underside of the bar and then bounce to a Dons defender to clear.

Lewington and Darling then combined to halt a promising Portsmouth counter-attack, which they had worked into the Dons’ box.

Martin went to his bench for the first time on 66 minutes, replacing Kasumu and Fraser with Charlie Brown and Josh McEachran as MK Dons went to two up-front.

The Dons boss then saw his goalkeeper pull off another superb diving save, this time to keep out Jack Whatmough’s goal-bound header. Fisher also did well to collect a teasing low cross from Daniels.

Whatmough’s next involvement was to go flying into a two-footed tackle on Brown – a poor tackle which earned him a straight red card and forced Pompey to play the final nine minutes with 10 men.

The Dons almost made their advantage count instantly, but O’Riley drilled just wide from the edge of the D.

Jordan Houghton then replaced Surman for the final six minutes, as Martin looked to add fresh legs to his midfield for the closing stages. He played his part in helping control the remaining minutes, which, happily for the Dons, went by without too much in the way of goal-mouth action.

Boss pleased as Dons bounce back


Russell Martin called for a response from his MK Dons side and got one, as they bounced back from their midweek defeat to Lincoln City by beating Portsmouth at Stadium MK. 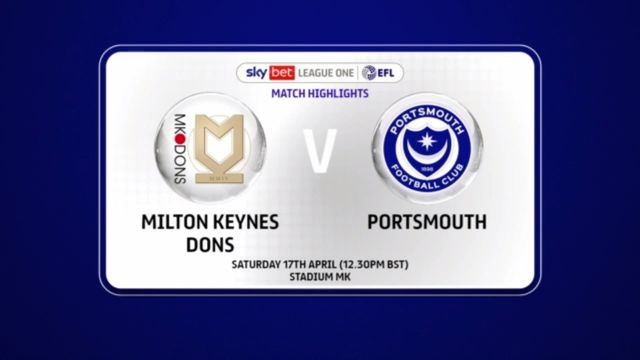 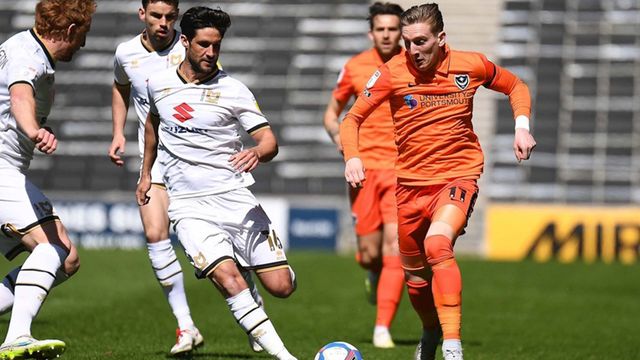