MK Dons are back on the road this afternoon as they travel to Ipswich Town.

The Dons fell to their first defeat in five matches on Easter Monday but have a chance to respond today when they visit Portman Road.

Russell Martin’s men have only suffered back-to-back defeats four times this campaign – two of which came during their run of three straight losses last month.

Should his side bounce back with a win, they could climb as high as 10th in the Sky Bet League One table while it may be enough to secure, at least, their third-tier status for next season.

THE OPPOSITION
Ipswich Town sit eighth in the Sky Bet League One table as they look to return to secure a play-off finish in hope of a return to the Sky Bet Championship. The Tractor Boys are just five points ahead of MK Dons with their tally for the season currently at 59 points.

Ipswich started the season with Paul Lambert in charge, however, the former Norwich City boss was relieved of his duties in late February. Replacing him in the hot seat was Paul Cook, a man who has three promotions on his CV with Chesterfield, Portsmouth and Wigan Athletic respectively. Cook has lost just three of his opening nine games as Ipswich manager - winning three and drawing three.

James Norwood leads their goalscoring charts with seven goals to his name this season. Gwion Edwards is placed second having found the net five times, while midfielders Teddy Bishop, Alan Judge and Jon Nolan all have four goals.

Mandron opened the scoring on 15 minutes, moments after Cameron Jerome had a goal disallowed for offside.

The Crewe striker then doubled both his and his side’s lead six minutes later – a lead that Russell Martin’s men weren’t able to overcome, as they failed to extend their four-game winning run.

Ipswich Town played out a goalless draw with Rochdale to extend their unbeaten run to three games.

Alan Judge has the best chance of the game with his effort from 25-yards ending narrowly wide of the post.

FIGHTING TALK
Russell Martin: "I’m sure a few thousand people will tell you Saturday is more important (for me), but we’ll prepare properly as we do with any game. I’m sure I would’ve got stick going there if there were fans. It’s a really good challenge for our players. We need to go there and enjoy it."

Paul Cook: "We've got to beat MK Dons at Portman Road on Saturday. It'll be a tough game, they are a very good side at passing the ball and managing the ball. We've got to win and our fans have to believe we are going to win. What will the picture look like at 5pm on Saturday - a lot better than it does today."

TEAM NEWS
MK Dons saw both Louis Thompson and Cameron Jerome limp out of Monday’s defeat to Crewe and boss Russell Martin didn’t provide an update on their status for this afternoon’s game when he met with the media for his pre-match press conference.

it remains to be seen whether the pair will be available for today's trip to Suffolk or whether they will join Ben Gladwin, Kieran Agard and Jay Bird on the sidelines.

In more positive news, Martin did confirm that midfielder David Kasumu made it through his first game in three months unscathed. He will be pushing for more playing time today.

Flynn Downes remains a doubt for Ipswich Town. The midfieldr has not featured since the 13th March when he was substituted off in the 36th-minute.

Meanwhile, strikers Freddie Sears and James Wilson will both face a late fitness test ahead of this afternoon's game.

OFFICIALS
Tom Nield will be the man in the middle today.

Mr Nield has overseen 28 matches so far this term, producing a total of 99 yellow cards. He has sent off two players and has awarded two penalties.

His assistant referees are Richard Wigglesworth and Michael Webb, while the fourth official is Sam Purkiss. O’Riley: A season of learning


Matt O’Riley feels the 2020/21 campaign has been one of learning, and although he’s excited for next season, he wants to ensure MK Dons finish the current campaign in strong fashion. 
Russell Martin was disappointed for his players that a dominant display at Portman Road wasn’t rewarded with three points. MK Dons and Ipswich Town shared the spoils for the second time this season after they played out a goalless draw at Portman Road.

The draw saw Russell Martin’s men fall to 14th in the Sky Bet League One table, two points adrift of the top half with six games left to play.

MK Dons were forced into three changes with Warren O’Hora, Cameron Jerome and Louis Thompson all ruled out through injury. In came Dean Lewington, Will Grigg and Scott Fraser while Lasse Sorensen, Joe Mason and Jordan Houghton returned to the bench.

The first shot on goal was an ambitious attempt by Armando Dobra, who picked up a headed clearance from Fisher, 30 yards out, but failed in his attempt to find an unguarded net with first-time half-volley.

Andrew Fisher was then called into action to punch clear a corner that swung into his six-yard box. The Dons soon threatened for the first time, with Fraser sending a ball into the box – one which was just out of Grigg’s reach.

Shortly after, Daniel Harvie saw a teasing low delivery of his turned behind by Toto Nsiala, which led to successive corners. From the second, Zak Jules produced a save out of Tomas Holy with an improvised effort from the floor – the defender had lost his footing when jostling for position but still managed to get a shot away.

A free-kick for a foul on O’Riley provided the MK Dons midfielder when a chance on 27 minutes but his left-footed strike was blocked. Martin’s men continued their dominance past the half-hour, with just their final ball letting them down in pursuit of an opening goal.

With five minutes to go in the half, they did work their way deep into the Ipswich penalty area but, after Grigg’s effort was blocked, Fraser fired the loose ball into the side netting.

The pair were involved again, two minutes later, with the latter having another effort on goal. This one appeared to strike the arm of Luke Chambers, inside the area, but referee Tom Nield waved away appeals for a penalty.

Ipswich countered and Dobra went close with a sliding attempt from Gwion Edwards’ low cross. That was the final effort of a goalless first half.

Within 90 seconds of the re-start, the Dons were awarded a free-kick right on the edge of the D following a foul on Grigg - Surman took the set piece and was denied by a terrific diving save from Holy, who was at full stretch to keep the shot out of his bottom right-hand corner.

Martin’s men were then forced into some defending, as Ipswich sent several early crosses into the area. Fisher was forced to collect one of those delivers – a low ball in from Andre Dozzell which he bravely collected inside his six-yard box.

The Dons responded on the hour with O’Riley firing a left-footed shot towards goal, which Holy saved.

Martin then went to his bench for the first time, replacing Harvie with Matthew Sorinola on the left-hand side. Sorinola was involved right away as he picked out O’Riley with an in-swinging cross - the midfielder, though, was twice denied by Holy at the far post.

Ipswich sub Freddie Sears fired wide with a rare effort on goal for the home side on 71 minutes. Before the re-start, the Dons made a double change, as David Kasumu and Charlie Brown replaced McEachran and Grigg.

Sears had another opportunity with 13 minutes to play, after latching onto a ball over the top. He spotted Fisher off his line and went for goal early but, fortunately for the Dons, couldn’t hit the target.

With 85 minutes on the clock, Sorinola delivered for Fraser but his improvised volley was blocked. He had another opening shortly after but was unable to create a shooting chance inside the area.

A brave diving block from Chambers kept a goal-bound O’Riley attempt from troubling Holy inside the final three minutes of the 90. Fraser also had a shot blocked as the game moved into stoppage time.

There were four minutes in total and in the second of those, a Stephen Ward interception prevented O’Riley from converting a teasing Sorinola cross. That was the closest either side came to a late winner, as the Dons were held to first goalless draw since the stalemate with Northampton Town back in November.

O’Riley: A season of learning


Matt O’Riley feels the 2020/21 campaign has been one of learning, and although he’s excited for next season, he wants to ensure MK Dons finish the current campaign in strong fashion.


Russell Martin was disappointed for his players that a dominant display at Portman Road wasn’t rewarded with three points. 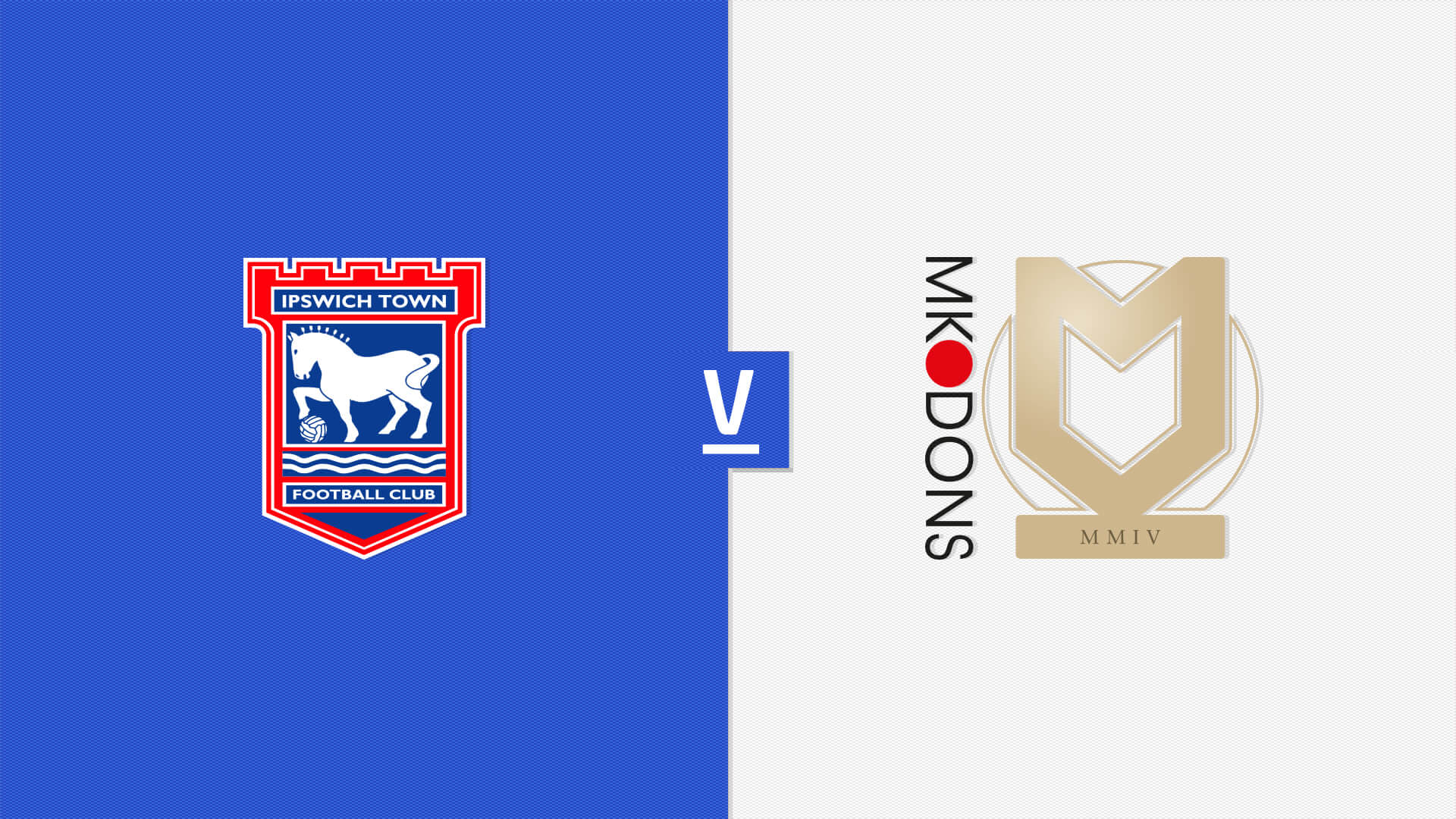 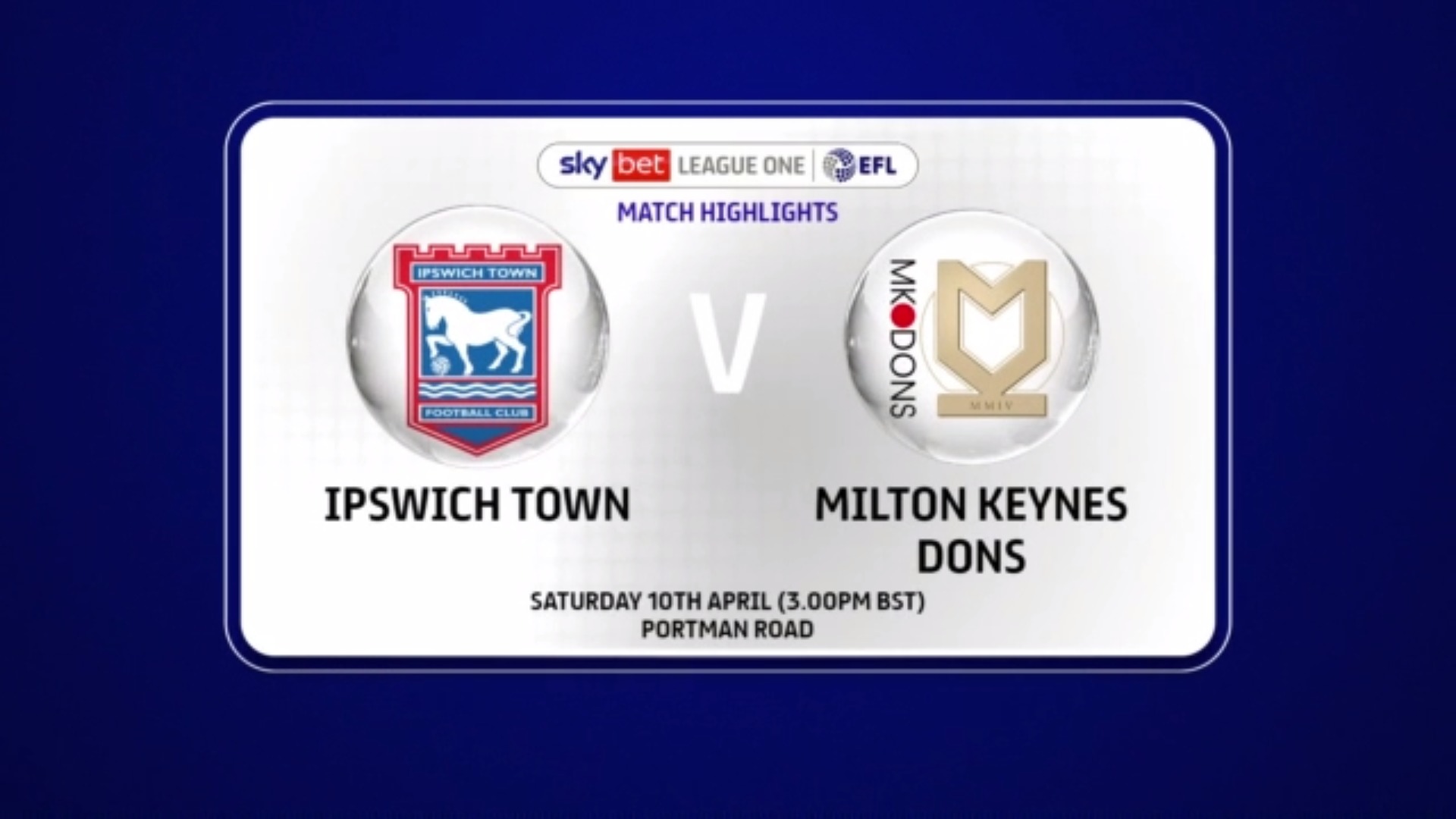 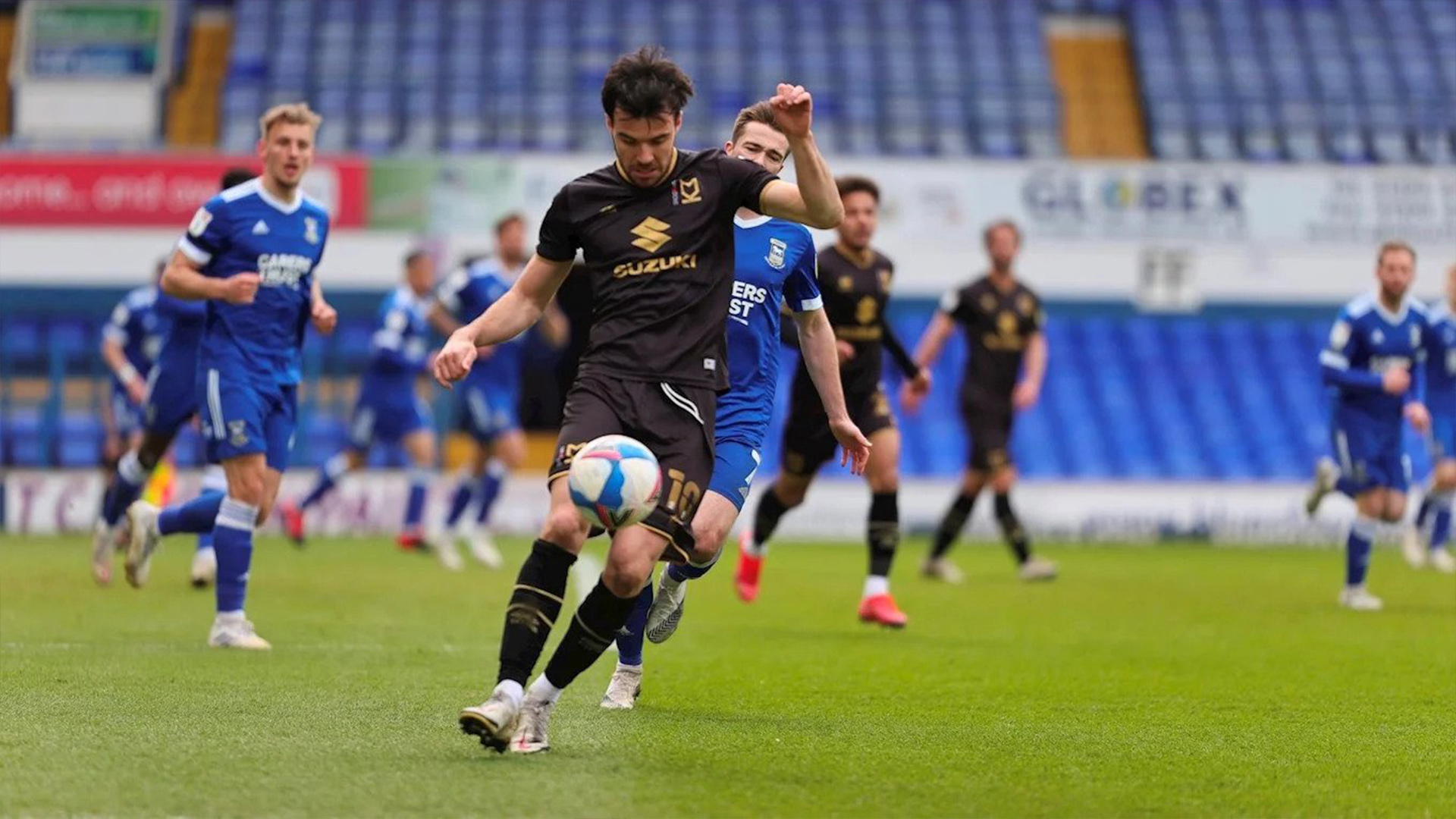