Alex Gilbey believes MK Dons are a few tweaks away from being the team they want to be. 
Paul Tisdale believes his MK Dons side are close to turning their form around, but knows they can’t afford to keep giving themselves uphill battles. 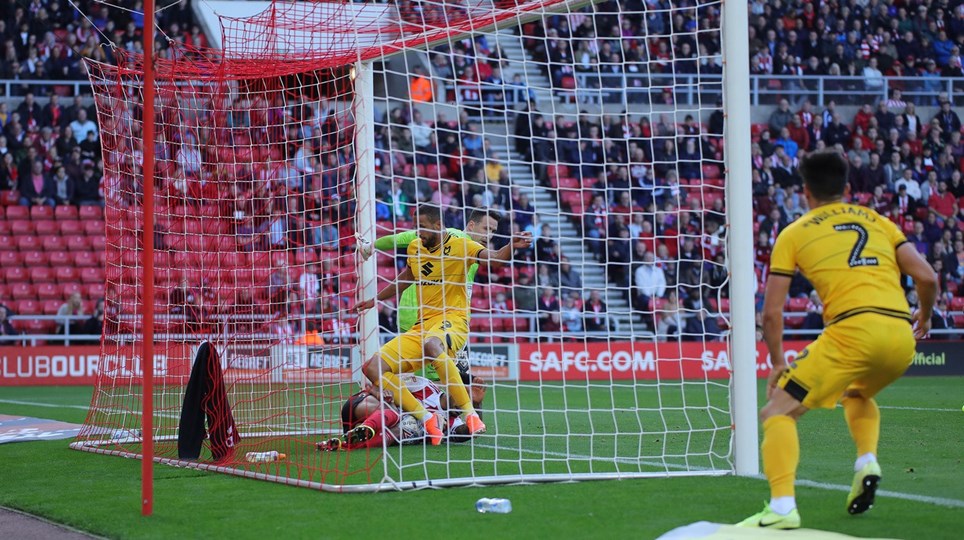 Max Power and Luke O’Nien struck within four minutes of each other and despite Jordan Bowery’s second-half finish, Paul Tisdale’s men weren’t able to salvage a result to take back to Milton Keynes.

The defeat, MK Dons’ third in a row in league format, keeps them in 15th place in the Sky Bet League One table, seven points adrift of the play-off places albeit with a game in hand.

Boss Tisdale made four changes to the side which played Liverpool in midweek, with Lee Nicholls, Dean Lewington, Russell Martin and Jordan Houghton all returning to the starting XI. There was a place on the bench for Jordan Moore-Taylor – his first appearance in a matchday squad since January.

The Dons made a composed start but it was Sunderland who threatened first as Charlie Wyke raced through. Lee Nicholls, though, was quick off his line and managed to save at the striker’s feet before George Williams cleared the loose ball.

On nine minutes, Sam Nombe got behind the Sunderland backline but wasn’t able to connect with Bowery, who was lurking inside the six-yard box. Shortly after, Callum Brittain delivered a low ball into the area but it was behind both Bowery and Alex Gilbey.

Brittain found himself inside the Sunderland area on the quarter hour mark but his low cross was turned behind for what turned out to be successive corners, which the home side dealt with.

Some good play by the Dons’ number 25 moments later led to an opportunity for Gilbey, whose header was blocked by a defender on its way through to goal.

At the other end, a well-worked corner presented a chance for Power, however he saw his drive blocked by Regan Poole.

The Sunderland midfielder had another opportunity seconds later and that time, made no mistake, firing home a first-time strike into the top left-hand corner from all of 25-yards. 1-0.

With their tails up, the hosts went on the attack again and Luke O’Nien hit the crossbar with a near-post header. Martin then threw himself in the way of another Power drive before Nicholls denied O’Nien from point-blank range from the resulting corner.

Sunderland pressure told on the half-hour mark as they doubled their lead through O’Nien, who beat the offside trap set by the Dons before sending a lob over Nicholls, one which managed to find its way across the line despite Poole’s best efforts to keep it out. 2-0.

Things went from bad to worse for Tisdale as Houghton was forced off with an injury shortly after the re-start. He was replaced by David Kasumu with 10 minutes to play in the half.

His side almost found themselves 3-0 down a couple of minutes later but Williams was fortunate that his miss-placed pass wasn’t punished by Chris Maguire, who dragged his left-footed shot just wide.

The Dons then responded with Gilbey intercepting a pass in the middle of the park before driving forward with purpose. It led to a chance for him to deliver a cross but it was just behind Nombe and Sunderland were able to clear.

Gilbey had another opportunity in the third minute of first-half stoppage time but saw his low drive towards the near corner kept out by a diving Jon McLaughlin.

At the start of the second half, Maguire curled over from a well-placed free-kick. Nicholls then denied Power with a diving save to his left.

The Dons then got the goal their play at the end of the first half deserved as Bowery converted from close-range. Kasumu created it with a ball deep to Williams, who looped a header back into the mix for Bowery to force home. 2-1.

In response, Sunderland forced a corner but from it, Maguire dragged an 18-yard effort wide. The Dons countered with Gilbey, who carried the ball all the way into the Sunderland area from half-way before seeing his low left-footed shot kept out by McLaughlin.

Tisdale’s men kept the pressure on and with 60 minutes on the clock, Kasumu curled over from the edge of the area. Tisdale then made his second substitution of the afternoon, replacing Bowery with Agard in attack.

Sunderland threatened a third goal with both Maguire and Power having attempts on goal – the former blazing over when well-placed inside the Dons’ penalty area.

Nombe appeared to have an opportunity on the edge of the six-yard box on 67 minutes but he wasn’t able to get a foot to Williams’ header into the mix. Agard then got in behind the Sunderland backline but was forced wide by the goalkeeper.

Both Gilbey and Kasumu had efforts blocked from the resulting corner, while the latter sent another long-range strike over shortly afterwards.

Tisdale’s final change arrived with just under 13 minutes play as Boateng brought on in place of Gilbey.

His team continued to press and push for a leveller but Sunderland stood firm. Dangerous balls were sent in from both flanks but the ball just never fell for men in yellow, as they fell to their third straight league defeat.


Alex Gilbey believes MK Dons are a few tweaks away from being the team they want to be.


Paul Tisdale believes his MK Dons side are close to turning their form around, but knows they can’t afford to keep giving themselves uphill battles.