MK Dons will be looking to return to winning ways this afternoon when they welcome Southend United to Stadium MK.

Paul Tisdale’s men fell to their first defeat of the month on Tuesday night as they were beaten 1-0 by Ipswich Town. The Dons, however, can take plenty of positives from the outing, and perhaps deserved a point from the encounter.

Southend arrive at Stadium MK placed 23rd in the Sky Bet League One table, but, a managerial switch seems to have rejuvenated the Shrimpers, who have scored six goals in their two games under Gary Waddock.

THE OPPOSITION
Since MK Dons last faced Southend United in late August a lot has changed at Roots Hall. Manager Kevin Bond resigned from his position on 6th September, after a run of six defeats at the start of the season. Heading into Saturday's clash at Stadium MK, Southend are yet to replace Bond, with former Dons coach Gary Waddock currently overseeing proceedings.

Waddock has certainly injected life into Southend United, with the Essex-side scoring three goals in each of their last Sky Bet League One outings Having picked up an impressive 3-3 draw against Fleetwood at Roots Hall last weekend, Southend were on the wrong side of a 4-3 thriller against Shrewsbury Town.

Striker Stephen Humphrys is a man to watch for the opposition, he's scored five goals already this year.

LAST TIME OUT
Jon Nolan’s first-half goal was the difference as MK Dons were beaten 1-0 by Ipswich Town at Stadium MK.

Nolan struck 12 minutes into the contest and despite a dominant second-half display, Paul Tisdale’s men were unable to restore parity.

Shrewsbury edged a seven-goal League One thriller as they beat Southend 4-3.

TEAM NEWS
MK Dons will be without Rhys Healey for considerable period of time according to manager Paul Tisdale, after the striker suffered a thigh injury. Baily Cargill, Joe Mason, Jordan Moore-Taylor and Ben Reeves are also likely to miss Saturday's game.

Alex Gilbey returned to the bench against Ipswich Town after he missed the trip to Blackpool with injury.

Southend United have no injury concerns.

OFFICIALS
Antony Coggins will be in charge of today's affair at Stadium MK.

The official refereed the Dons five times last season, his latest affair was the 2-0 defeat to Colchester in April 2019. That afternoon he handed out four yellow cards.

So far this season, Coggins has shown 16 yellow cards in six games but hasn’t made a sending off.

His assistants are Marvyn Amphlett and Lisa Rashid. The fourth official is Mike Desborough.

Can't make the match? Not to worry, supporters will be able to listen to live commentary on iFollow MK Dons for just £2.50 - click HERE to purchase an Audio Match Pass! Tis: We must find a way in games like Saturday


MK Dons must find a way to salvage points in games like Saturday’s Sky Bet League One clash with Southend United, according to manager Paul Tisdale. 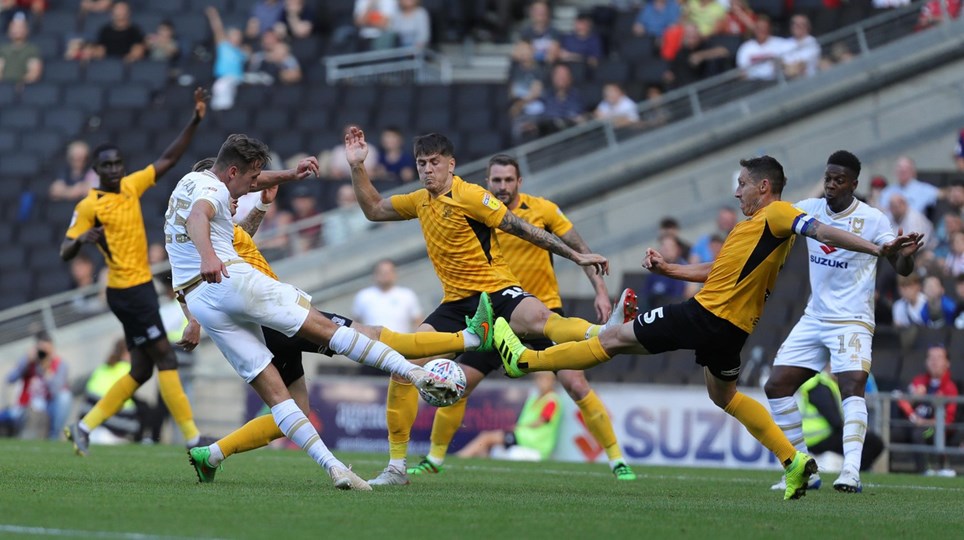 Charlie Kelman’s fourth-minute strike was the difference at Stadium MK as MK Dons were beaten 1-0 by Southend United.

Kelman struck home a loose ball early on in the Sky Bet League One contest and despite a dominant display, Paul Tisdale’s men weren’t able to salvage a result.

Boss Tisdale made two changes to his starting XI with Dean Lewington and Callum Brittain replacing Brennan Dickenson and George Williams – the latter fit enough for the bench despite picking up a knock.

The Dons started brightly and worked their way into the Southend penalty area inside the opening 70 seconds. Hiram Boateng let fly with his right foot but saw his effort blocked by a defender.

Southend responded and took the lead after their first attack. Regan Poole and Joe Walsh did brilliantly to deny the visitors with well-timed tackles but a loose ball eventually fell to Kelman, who slotted into an empty net. 0-1.

The visiting side threatened a second shortly after through Brandon Goodship but he dragged his left-footed shot well wide of the target. At the other end, Jordan Houghton produced a diving save out of Mark Oxley with a low driven free-kick.

Tisdale’s men threatened again on 20 minutes. After coming close down the right, play was switched out to Lewington, whose left-footed try was deflected behind. From the resulting corner, Poole headed wide.

Oxley was forced into action midway through the first half, alert to deal with a blocked defensive clearance which cannoned back off Nombe towards his goal. Rob Kiernan then produced a vital sliding block to keep out McGrandles’ low drive towards the left-hand corner.

On the half-hour mark, Nicholls was forced into a save from Simon Cox’s long-range strike. The Dons then won a corner from which Nombe looped a near-post header over the bar and onto the roof of the net.

Tisdale’s men worked themselves in again down the right on 39 minutes but Nombe couldn’t direct Poole’s cross towards goal and Southend were able to clear above Lewington, who was lurking at the far post.

McGrandles went close with a stunning long-range effort in first-half stoppage time but just couldn’t keep it down. Tisdale’s men, therefore, headed into the break a goal down.

The Dons boss made a change at half-time, bringing Kieran Agard on in place of Houghton to add to his frontline.

The striker was involved early as he tried to latch onto a long pass forward from Poole but, despite his best efforts, he couldn’t keep the ball in play. Agard also came within an inch of connecting with Nombe’s low cross early in the first half.

The two combined again on 50 minutes, as Agard lifted a ball into the box his strike partner. A Southend defender, however, got above him and Oxley was able to mop up the loose ball.

A lapse in concentration at the back almost provided the Shrimpers with a second but Poole was able to get back and block Isaac Hutchinson’s effort.

The Dons were in full control and Brittain sent another cross into the box in the 57th-minute which Agard flicked into the grateful arms of Oxley. Four minutes later, Kasumu curled wide from the edge of the area.

Hutchinson again caused problems at the other end of the pitch, testing Nicholls with a well-taken free-kick. The Dons goalkeeper did make the save.

Dickenson was MK Dons’ second sub of the game – he came on for Lewington in the 65th minute. It was from his cross that Brittain had a sighter on target but saw his attempt blocked on its way through to goal.

With 20 minutes to play, Nicholls kept the deficit at one with a diving save from Kelman’s strike across goal. At the other end, Kasumu had a goal-bound effort blocked inside the six-yard box.

Gilbey was Tisdale’s final throw of the dice, enterting the contest with 13 minutes left to play. His midfield teammate thought he’d levelled things with a fiercely-struck left-footed attempt but Oxley made the save.

Dickenson also thought he had equalised with a stabbed effort which was bravely blocked. Moments later, Agard fired over at the near post from a Nombe cutback.

In the final two minutes of regulation time, Cox struck the post with an ambitious 25-yard strike. Hutchinson also had an attempt blocked by Martin.

The fourth official added on a further five minutes but the Dons weren't able to fashion anything over than a late corner which was headed wide by Walsh.

Tis: We must find a way in games like Saturday


MK Dons must find a way to salvage points in games like Saturday’s Sky Bet League One clash with Southend United, according to manager Paul Tisdale.